At 7.51pm on a balmy Sunday night on the last day of July, England captain Leah Williamson lifted the European Championship trophy in front of 87,192 fans at Wembley and changed the sport forever.

The glory and simplicity of 'England 2 Germany 1' in the Euro 2022 final, watched by a peak TV audience of 17.4million with nearly six million more streaming online, in itself an utterly seminal moment in women's football, would have been enough.

But football is so much more than just a results game, and the macro- and micro-implications in and outside sport are of an almost indescribable magnitude. 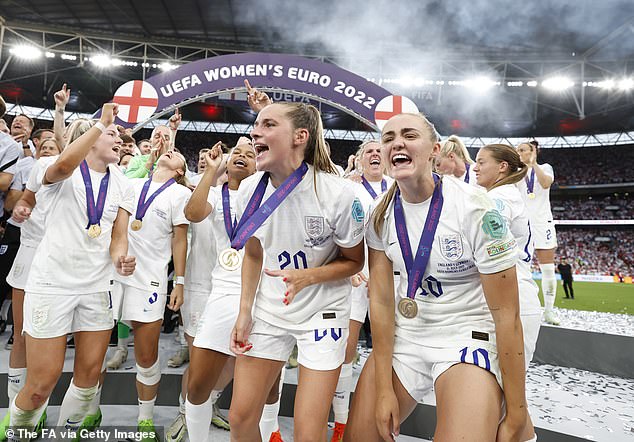 England lifted the Euros trophy in front of 87,192 fans at Wembley and changed the sport forever 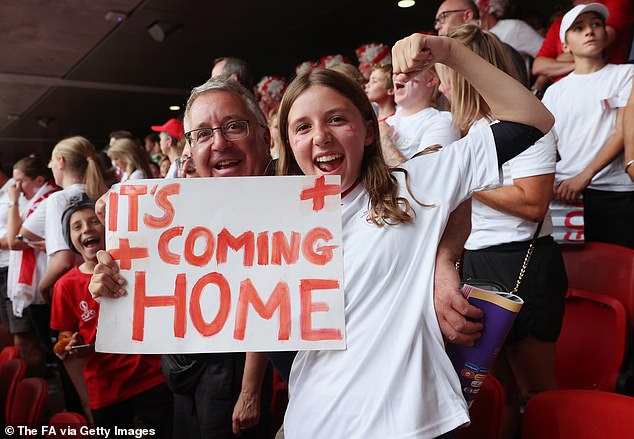 It was watched by a peak TV audience of 17.4m with nearly six million more streaming online

The government funding to follow, the potential grassroots explosion, reducing the number of schools – shockingly, about a third – who do not let girls play football, the inexorable rise in interest and ticket sales, the brother who will let their little sister tag along to play with their mates.

Plus the sales of England bucket hats, the lack of pointed 'do you really like football?' questions, the young girls who will look up at their heroines with stars in their eyes and hope in their hearts, with the genuine belief to think 'that could be me'.

Still football, but on a new path. The same, but different.

As one fan gleefully proclaimed on Wembley Way, 'the mandem couldn't so the galdem did'. Well, quite.

But the awful scenes before, during and after England vs Italy at the same stadium, the occasion sullied by ticketless thugs cheating their way in, rampant drug-taking, the tangible toxicity, and racist abuse of black players were a world away from Sunday.

Far more female and family-oriented, no inane songs about the war but with all the needle, bite and visceral friction of two of the best sides in the world going toe-to-toe for glory. Again: the same, but different. 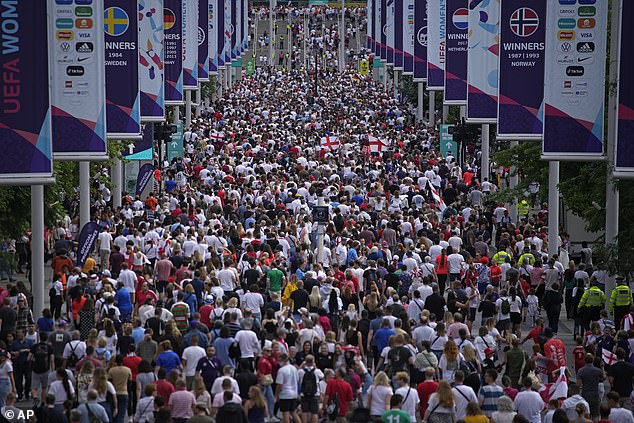 And how apt, given it was Kelly's 17-minute and three-second masterclass that turned the game.

The Manchester City star had settled in fine since replacing Player of the Tournament and Golden Boot winner Beth Mead in the 64th minute, but the second half of extra time was where she really clicked into gear.

In the 109th minute, she hooked the ball first-time onto Jill Scott, who won the throw. Kelly, gestured for the crowd to be louder but for her team to be calm, before winning a corner and immediately roaring with primal passion. The fans responded.

Lauren Hemp swung it in, Lucy Bronze knocked it down, Kelly held off the defender brilliantly and swung for the ball with desperation but missed it with a wild swipe. It was perhaps her only miscue of the whole match.

The ball flicked off Frohms and back to Kelly, who desperately stretched to poke it past the three Germans on the line, a moment of transcendent splendour delivered by one of the scrappiest strikes you'll ever see.

Kelly then offered a moment to rival American Brandi Chastain's famous 'sports bra' celebration – which the New York Times called the most iconic photo ever taken of a female athlete, after she had netted the World Cup-winning penalty against China. 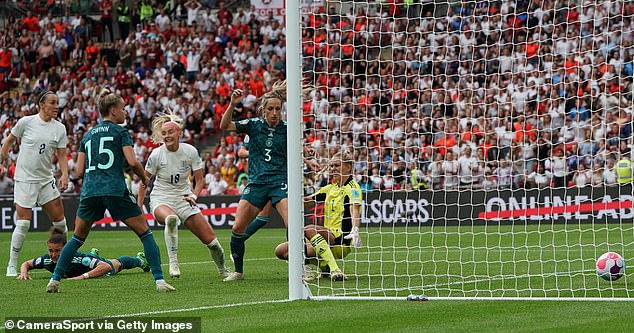 It was apt Chloe Kelly (18) scored the winner, given it was her actions that changed the game 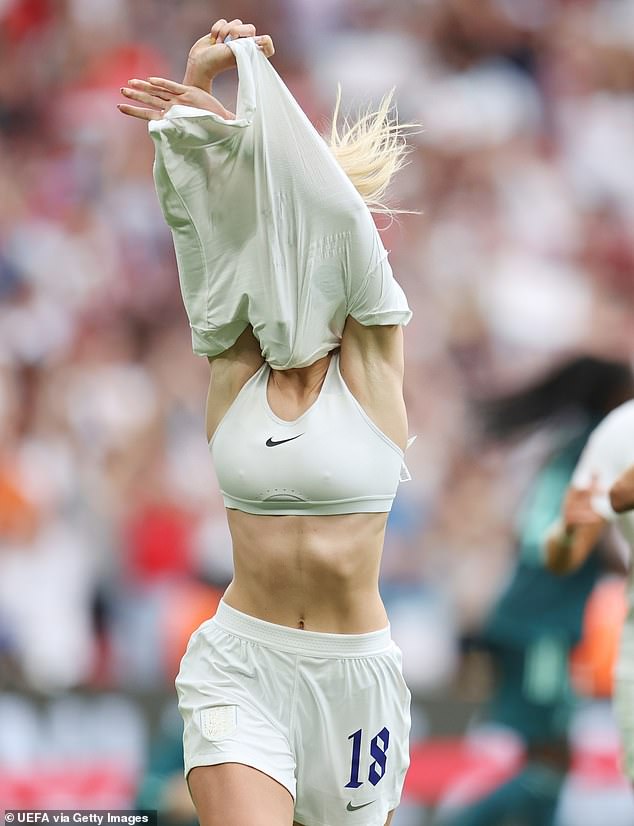 She whipped her shirt off (above), whirling it furiously, the pain and anger of the ACL injury in May 2021 melting away in a glorious snapshot of euphoria

She instinctively whipped her shirt off, whirling it furiously, the pain and anger and frustration of the ACL injury in May 2021 which kept her out of the Olympics melting away in a glorious snapshot of euphoria.

That image, the shirt suspended above her as if floating in the air, perfectly showing her name on the back, the 'naked madness' as criticised by the German newspapers, a sublime tableau of bare insanity to adorn every front page, seemed so perfectly aligned as to suggest predestination.

'I just went mental,' she later admitted, an England cowgirl hat atop her head. 'I didn't know what to do. I didn't think about it or plan it. It was alright though, weren't it?'

From then, it was an expert demonstration of time-wasting, flamboyant step-overs and extravagant dummies, keeping the ball in the corner, smashing the ball miles wide when offside, delaying a throw-in, the crystal-clear understanding of exactly what to do and how and when to do it.

How fitting that it was Kelly who scored the winner, the woman who could not bear to watch the Olympics as she recovered from that knee injury and the girl who used to get the 92 bus from Ealing, west London to Wembley just so she could buy an FA Cup final programme and go straight home again.

The QPR fan, who jumped for joy at Bobby Zamora's last-minute winner against Derby in the 2014 play-off final, had said to her family on Sunday morning: 'There's going to be a Bobby Zamora moment today'. And there was.

Evoking the past but with contemporary implications. The same, but different. 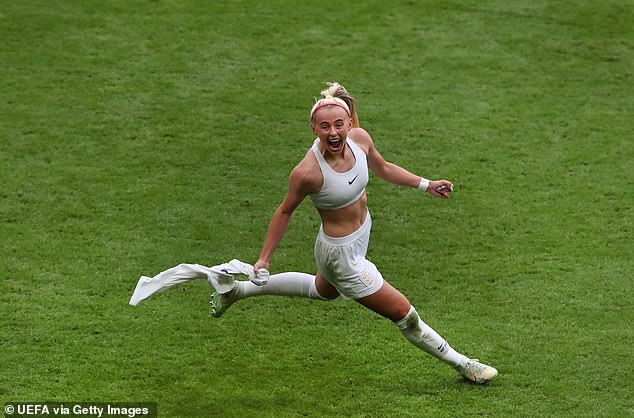 To single Kelly out, though, feels unfair given the brilliance of so many others. Rainbow armband-clad captain Leah Williamson, the Milton Keynes Maldini, bellowing into the microphone to praise the team after a near-perfect individual performance.

Or Jill Scott, a towering figure in more ways than one, who told a German opponent to 'f*** off you f***ing p****' in one of the most instantly iconic phrases ever captured on TV cameras, before pretending to interview the trophy and reportedly pulling an all-nighter in the post-match celebrations.

Or Ella Toone, who cried in a Starbucks shop with her dad for an hour after being released by Manchester City before making her name with their rivals Manchester United.

It was Toone who gave England the lead, taking a touch to set before chipping Frohms from Keira Walsh's otherworldly pass, three delicate strokes of an artist's paintbrush, the midfield playmaker 'hearing her shouting in her little Wigan accent and putting it on a plate for her.'

Lina Magull's close-range equaliser briefly threatened to derail the Lionesses, but Kelly would have something to say about that. 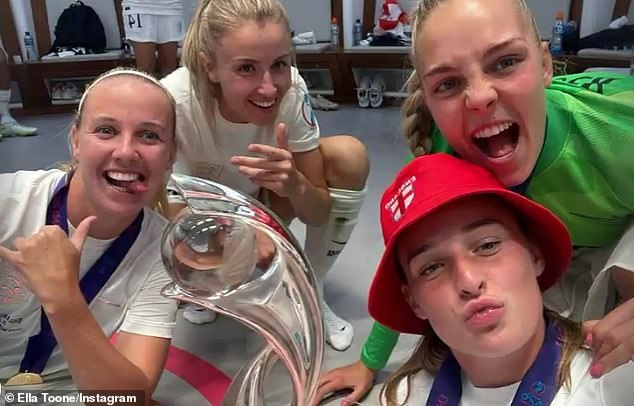 Change and progress is a long, hard-fought and – crucially – ongoing process.

But when a shrill blast from Monzul's whistle pierced the tepid, rarefied air in north-west London, it was hard not to view it as a signal marking the end of the previous era and the start of the next.

The point of demarcation between then and now, the world split into two timelines: July 31, 2022 BC: Before Chloe, and after.

And so as audiences old and new shuffled into work, perhaps with sunglasses shielding hangovers, humming Baddiel and Skinner or signing up for a WSL season ticket, you somehow knew it would never be the same again.

How could it be any different?

'I was really struggling': Arsenal star Kieran Tierney opens up on his agony of losing friends to suicide and reveals he struggled with 'homesickness' after moving to London from Glasgow in Amazon's All or Nothing series

'What on earth is he doing?': Piers Morgan leads criticism of Mikel Arteta's 'insane' idea to play 'You'll Never Walk Alone' over speakers in training before Liverpool trip... as Gabby Agbonlahor labels it 'the most pathetic thing I've ever seen'