Aguero set for debut after being named in Koeman's squad

Clouds gather over Cristiano Ronaldo's Manchester United: Solskjaer's future up in the air

All things considered, this was a point Arsenal should be content with even though it meant the end of their four-game winning run.

After the devastating display last time out against Tottenham, this was a day to dig in. And, for parts, cling on.

The threat they carried less than a week ago was, for the most part, nowhere to be seen at the Amex. 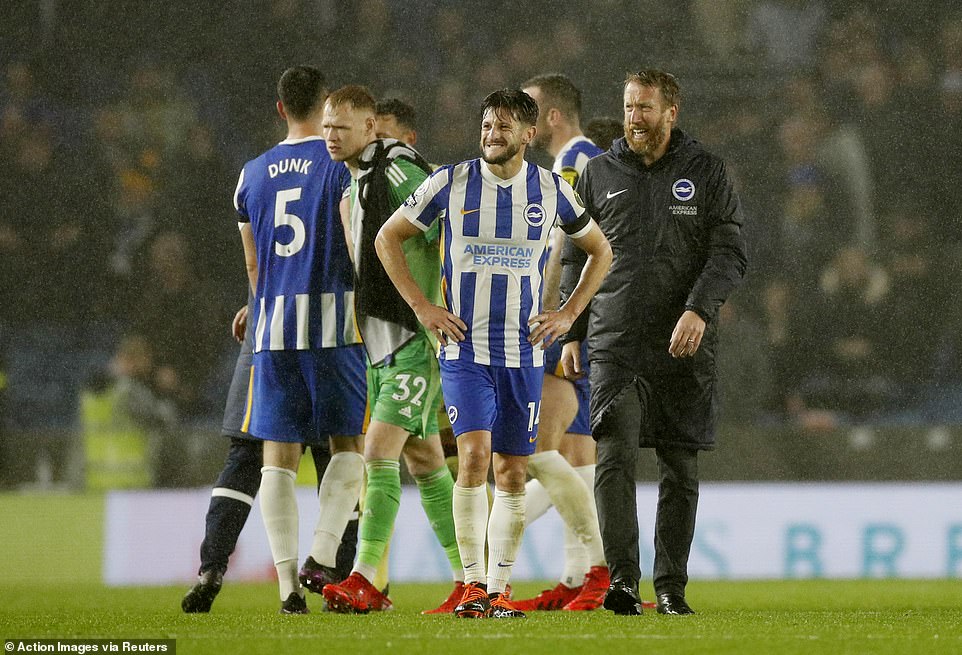 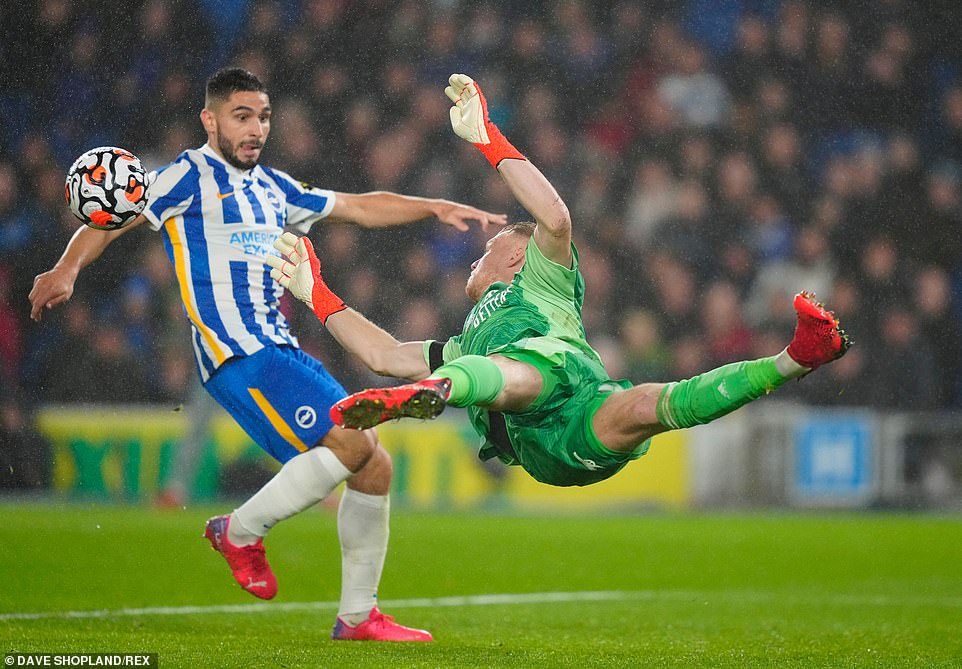 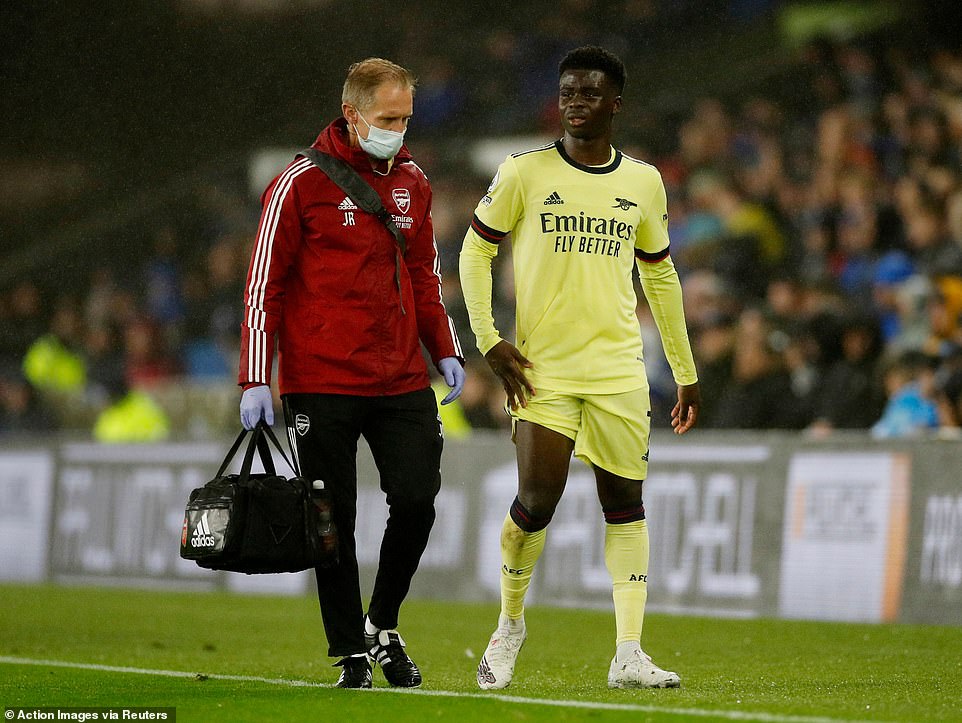 And instead it was Brighton who did most of the attacking while Arsenal needed their new-look and developing back four to put their bodies on the line and Aaron Ramsdale – one first half slip aside – to be sure with his handling. At times Arsenal were under siege but they held on.

For Brighton, who have exceeded expectation with their start to this season, this was a reminder of some of their more frustrating outings from last term, particularly at home.

They dominated the game, played the better football, looked more dangerous and racked up 21 attempts but only two were on target and they did not arrive until late on. 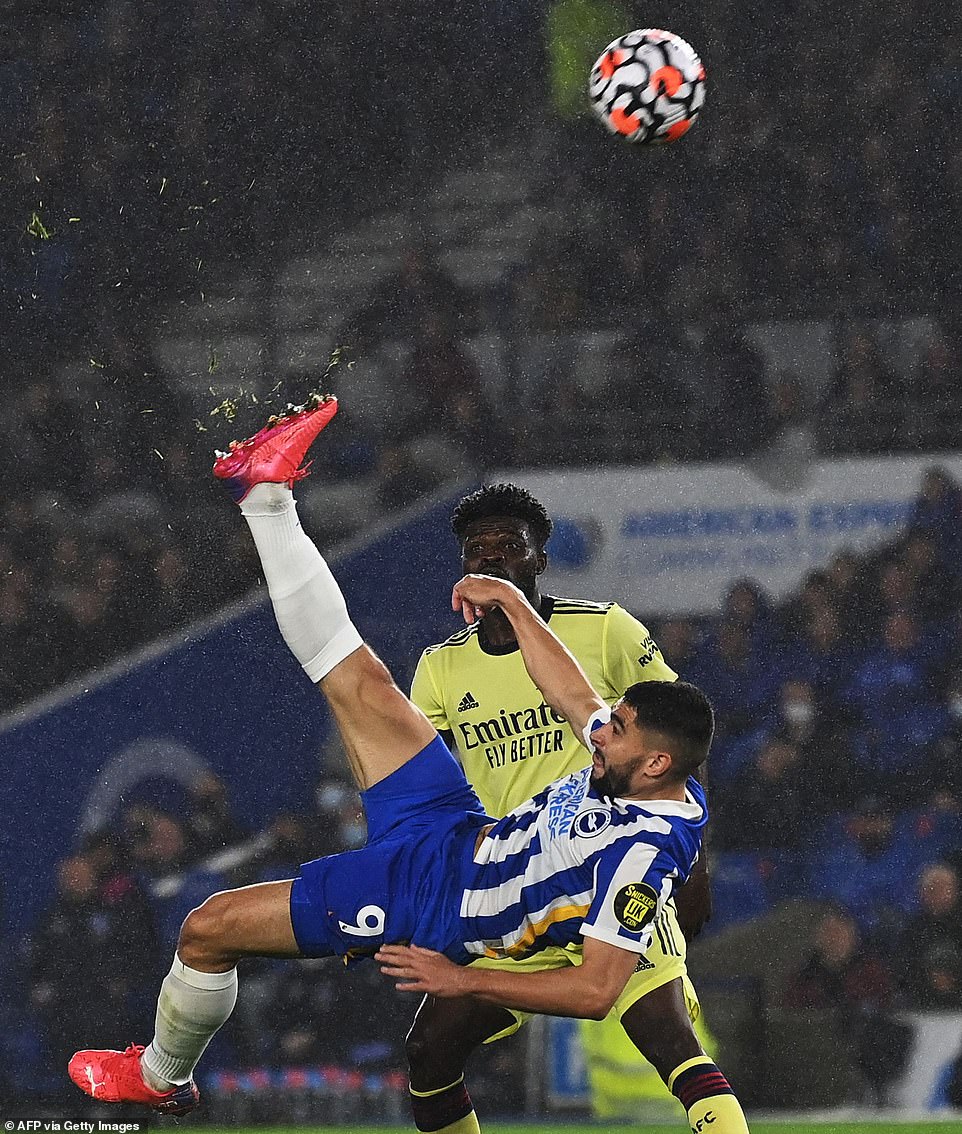 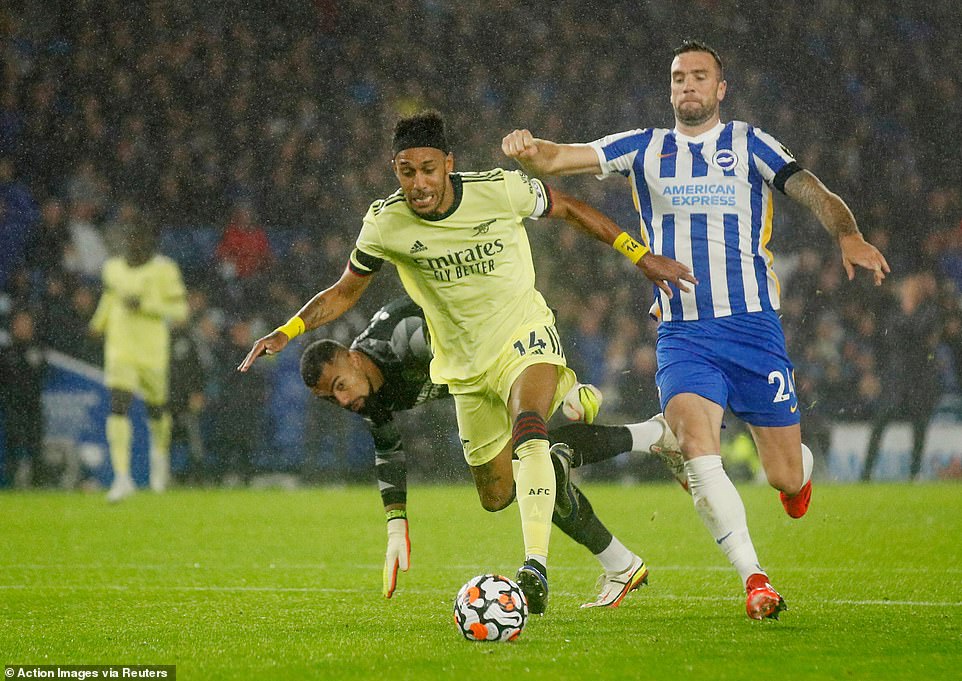 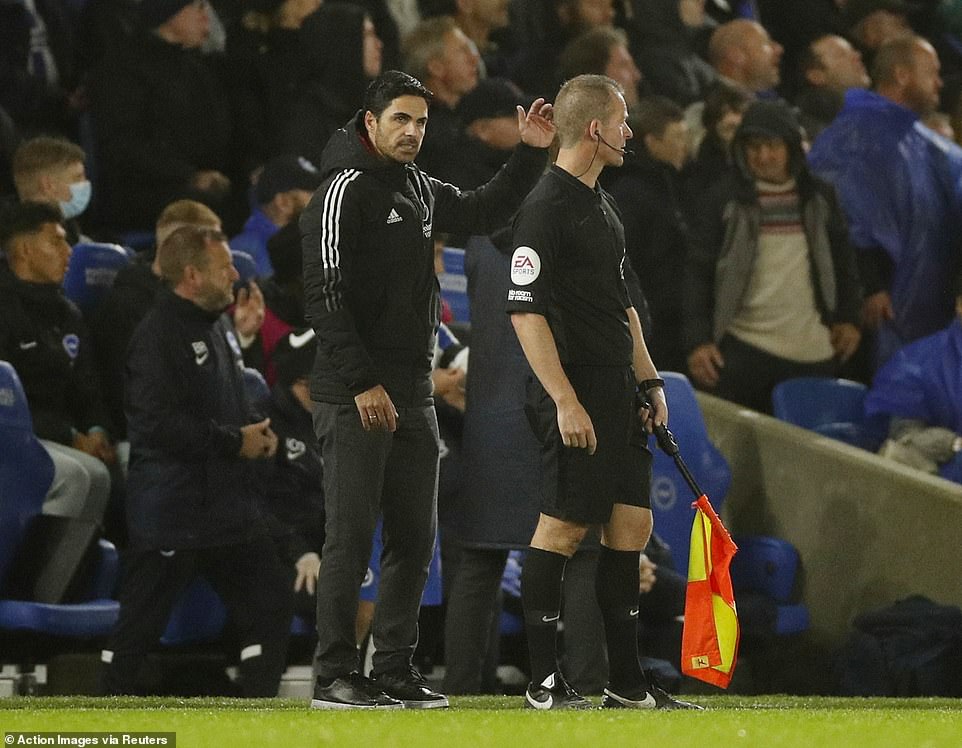 So it was a point apiece for Brighton, Arsenal and Graham Potter and Mikel Arteta, two of the contenders for the manager of the month award after impressive Septembers for their respective sides.

Arsenal and one of the stars of that north London derby win picked up where they left off.

Bukayo Saka was on the front foot immediately, driving at Brighton’s defence, past two defenders and firing straight at Robert Sanchez.

The hosts took a little while to warm up but eventually started pushing Arsenal back though, initially, without giving goalkeeper Aaron Ramsdale too much to worry about.

That was until the 14th minute when Adam Lallana’s clever pass released Marc Cucurella and he forced Kieran Tierney to concede a corner from the Spaniard’s dangerous cross.

Leandro Trossard then faced up Tierney before dragging a shot across goal and just too far in front of the Brighton bodies sliding in at the back post.

The swirling wind and rain was helping the speed of the game but was not ideal for goalkeepers.

Ramsdale would have testified to that when he dropped Neal Maupay’s cross before Lewis Dunk scooped the loose ball over on the stretch.

As he tried to salvage the situation Ramsdale took a hefty clattering from Shane Duffy which left him requiring brief treatment.

Arsenal burst back into life midway through the first half when Saka got away from Burn and lifted in a cross which Pierre-Emerick Aubameyang headed against the post.

But that was only brief respite from Mikel Arteta’s men. Gabriel helped a Lallana cross over his own bar as Trossard flew in hoping to convert.

Burn then found himself in a big gap between Gabriel and the Ben White – jeered on his Amex return following his £50m summer move to Arsenal - but got his free header wrong before Maupay hooked a volley wide.

The Brighton attacks and attempts kept on coming as their confidence. Arsenal were hanging on.

Duffy was next to go close with a backpost header from Pascal Gross’s corner which half the ground thought was in though it brushed Ramsdale’s side-netting instead.

Brighton deserved at least one goal for a confident first-half display full of possession – 61 per cent – and positive moments.

The pattern continued after the break with Jakub Moder curling a few yards wide minutes in and then slicing a half volley over.

Arsenal reappeared with greater menace in their play, Saka again to the fore, but clear chances continued to elude them. 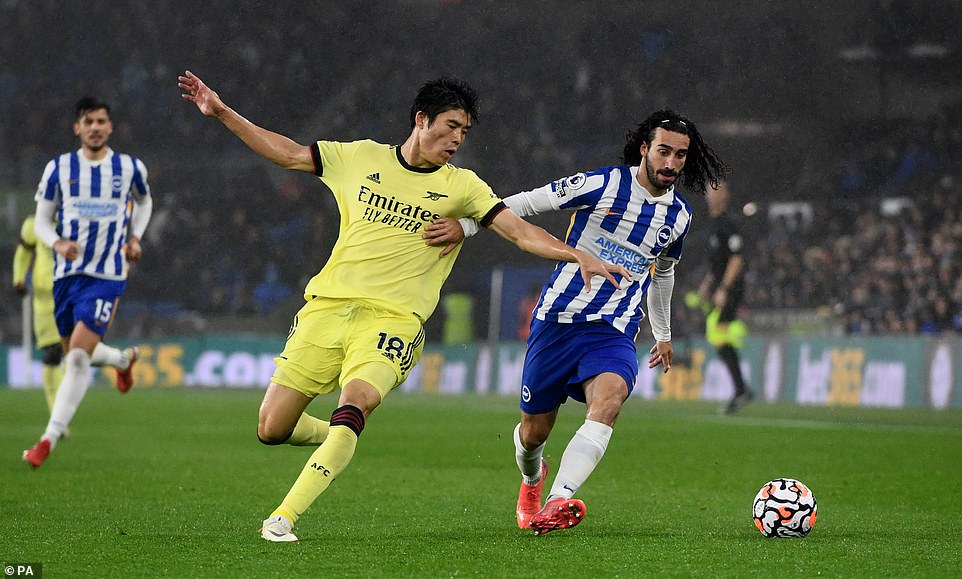 Arsenal defender Takehiro Tomiyasu was caused numerous problems by Marc Cucurella, who was excellent for Brighton 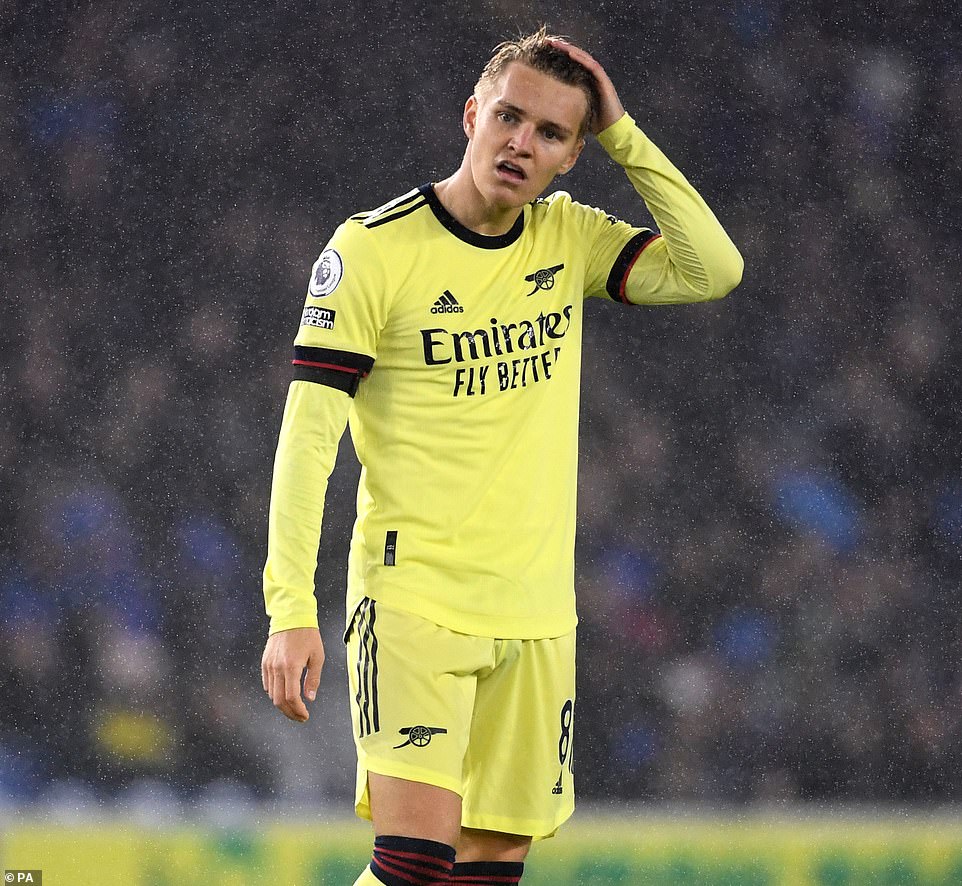 Midfielder Martin Odegaard was substituted, with the Norwegian having not been his usual self against Brighton 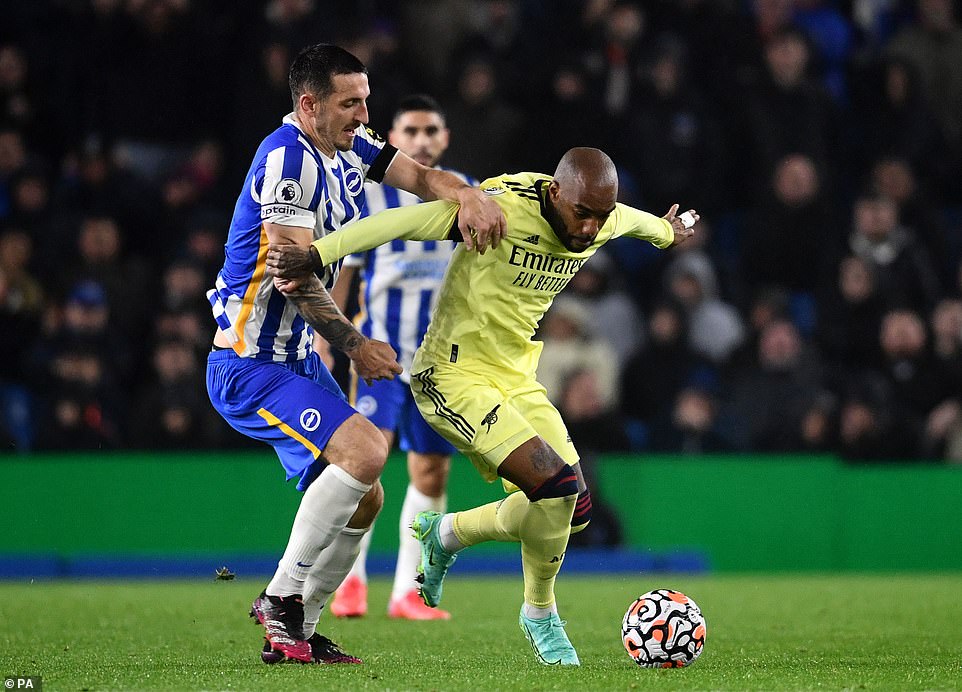 Alexandre Lacazette, who entered the frays as a substitute for Arsenal, is challenged by Brighton defender Lewis Dunk 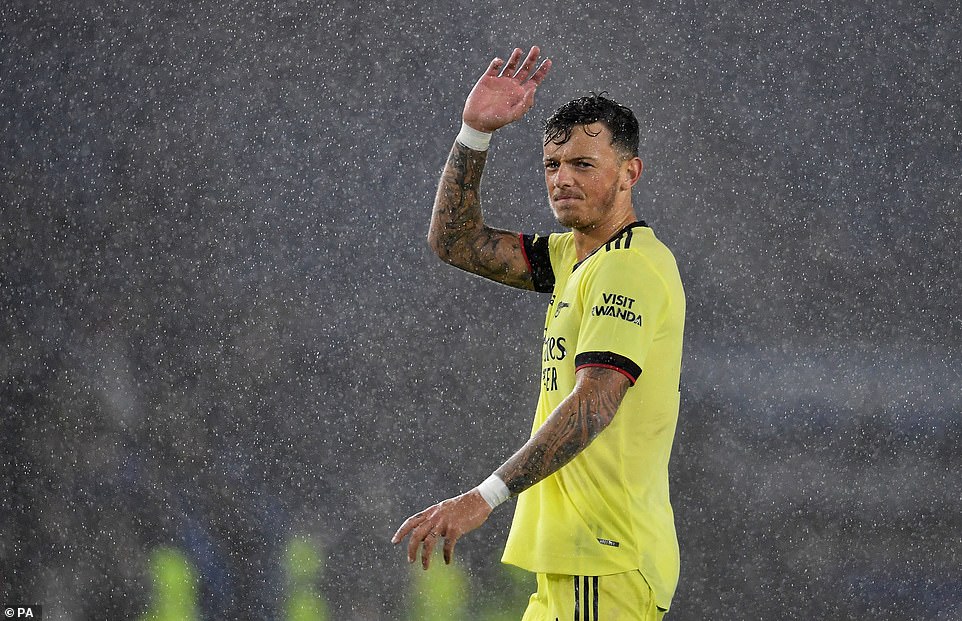 They thought they had one when Aubameyang raced and rounded Sanchez. But he was denied by a last-ditch Duffy challenge and then saw that the flag was up anyway.

Meanwhile Thomas Partey kept trying his luck from distance … and missing. His count rose to three before the hour.

Midway through the half Arteta feared the worst on the sideline, throwing his arms in the air in frustration when Trossard burst between Partey and Albert Sambi Lokonga and fed the ball wide to Cucurella.

From his cross, kept alive by Trossard, Maupay sent an overhead kick over the bar, much to Arteta’s relief.

The way the game had gone, and after all the promising situations that had come to nothing for Brighton an Arsenal goal would have been little surprise and Emile Smith Rowe threatened one when he tested Sanchez after being put through on goal.

But a few more near-misses for Brighton followed, from Cucurella, Gross, his subbed on replacement Solly March and Shane Duffy. A flying intervention from Ramsdale was also vital for Arsenal.

When he produced one against Spurs it prevented their late fightback gaining any further momentum.