'I'm done with f***ing losing': Anthony Joshua promises WAR in his Oleksandr Usyk rematch, with the former champ 'boiling up' just thinking about it

Paedophile Barry Bennell 'quite clearly' had a Manchester City role and 'everyone knew him', a High Court hears from one of the eight men taking legal action against the Premier League club

Barça's Ansu Fati won't play against Rayo Vallecano due to a knee injury Rafa Marquez: I was very close to joining Real Madrid Carlo Ancelotti has 'poked' Eden Hazard by benching him for El Clasico then insisting he prefers other Real Madrid players... but fallen star is set to get his chance against Osasuna, claim Spanish papers Ansu Fati's injuries continue: He will miss out on Rayo Vallecano fixture

Just days after admitting in an interview that when Barcelona dumped him at the start of last season Ronald Koeman treated him ‘like a 15-year-old’ making him train alone and that then-Barcelona president Josep Bartomeu tried to stain his reputation by leaking that he was a problem in the dressing room, he destroyed his former team with an assist and a goal.

He put his hands together to apologise to Barcelona supporters after his goal but by then the damage had been done to his former employers. He also mimicked holding a phone to his ear – surely a reference to Koeman calling Barcelona’s third-highest all-time goalscorer to ditch him in the briefest of conversations in the summer of 2020. 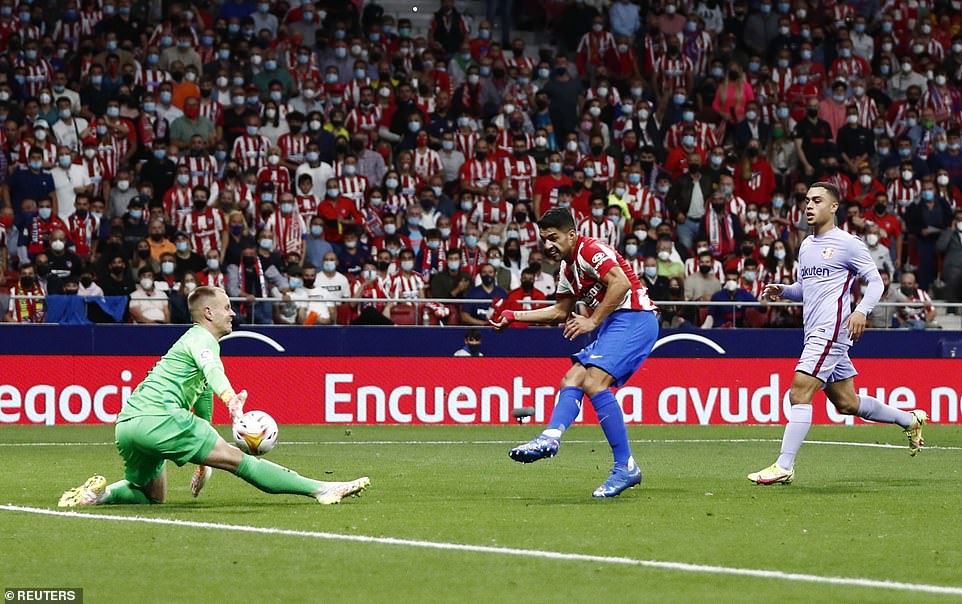 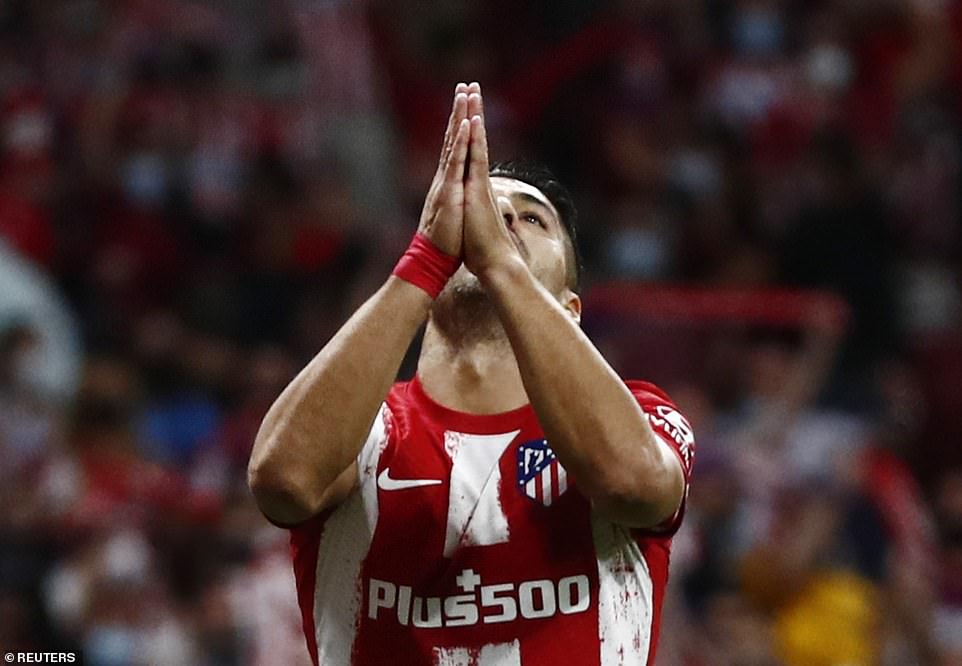 Koeman looked down on the demolition job from his place high in the Wanda Metropolitano. He was sat next to Barcelona’s head of global scouting Jordi Cruyff in what looked like confirmation of comments made by president Joan Laporta before the game that whatever happened he would stay in charge.

His team played with a back four and a high defensive line as so many had demanded but with Suarez, the brilliant Joao Felix and the excellent Thomas Lemar to take advantage, they were still well beaten.

Felix was in the team ahead of the benched Antoine Griezmann and he had Atletico’s first chance when he drilled Thomas Lemar’s assist just wide. 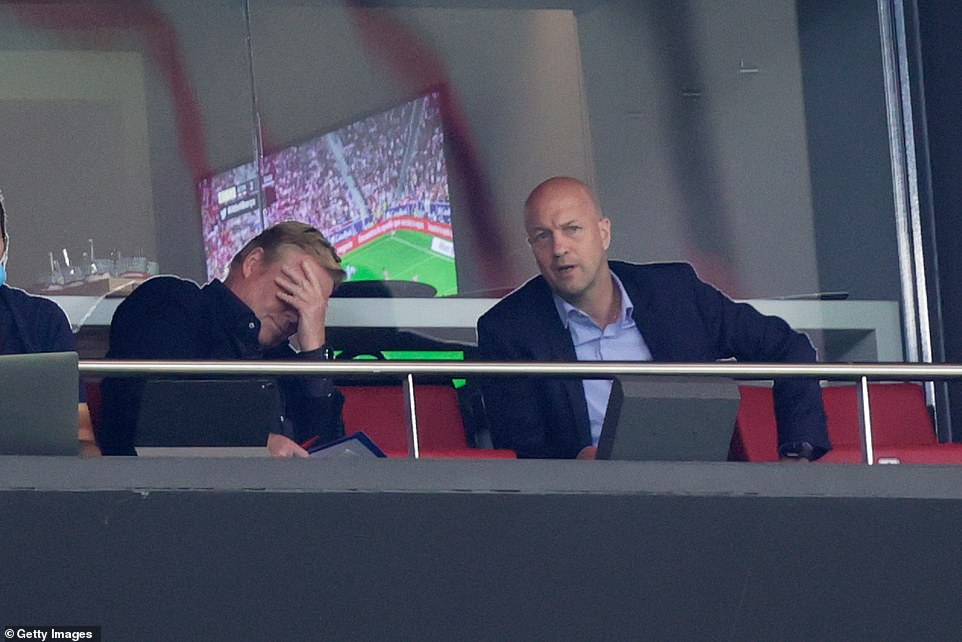 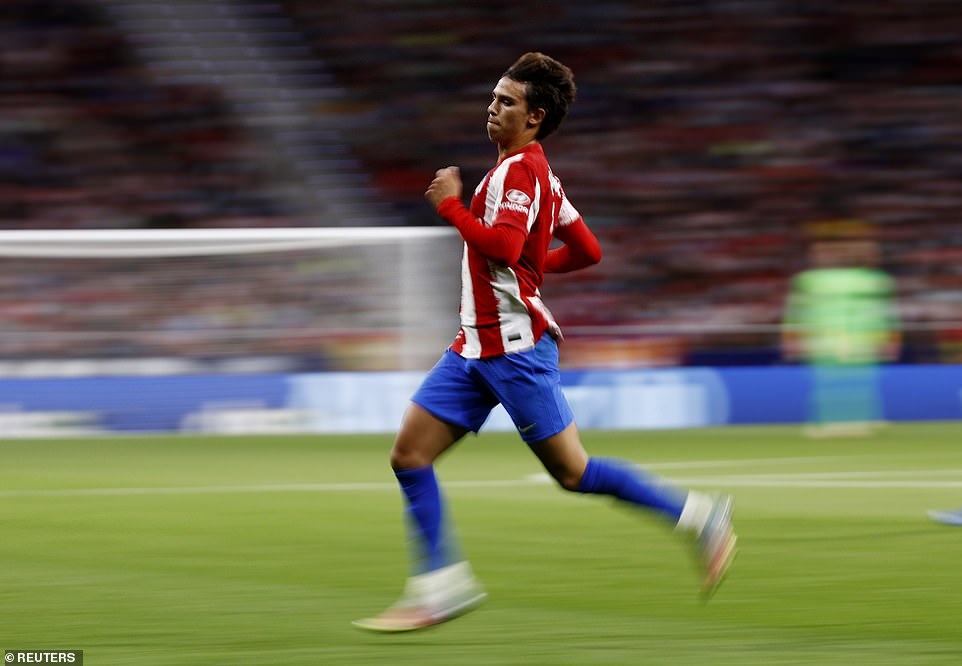 Barcelona had 17-year-old midfielder Gavi, fresh from a shock Spain call up in midweek, starting in midfield. He held nothing back when he barged into Lemar and was booked.

Barcelona had started well but Atletico were ahead on 23 minutes when Joao Felix spun away from Oscar Mingueza and played the ball to Suarez whose first time cushioned pass teed-up Lemar who scored high into the roof of Marc Andre ter-Stegen’s net.

It was Atletico’s all-time second most expensive signing scoring from a pass from the all-time highest – over 200m euros worth giving the home side the lead.

Gerard Pique and Sergio Busquets argued their way back towards the halfway line for the restart and it would not be the first time Barcelona looked helpless in the face of quick Atletico attack.

Coutinho flashed a shot just wide as Barcelona went for a rapid response but from another triangle – this time Yannick Carrasco to Felix to Suarez – the Uruguayan shooting just wide. 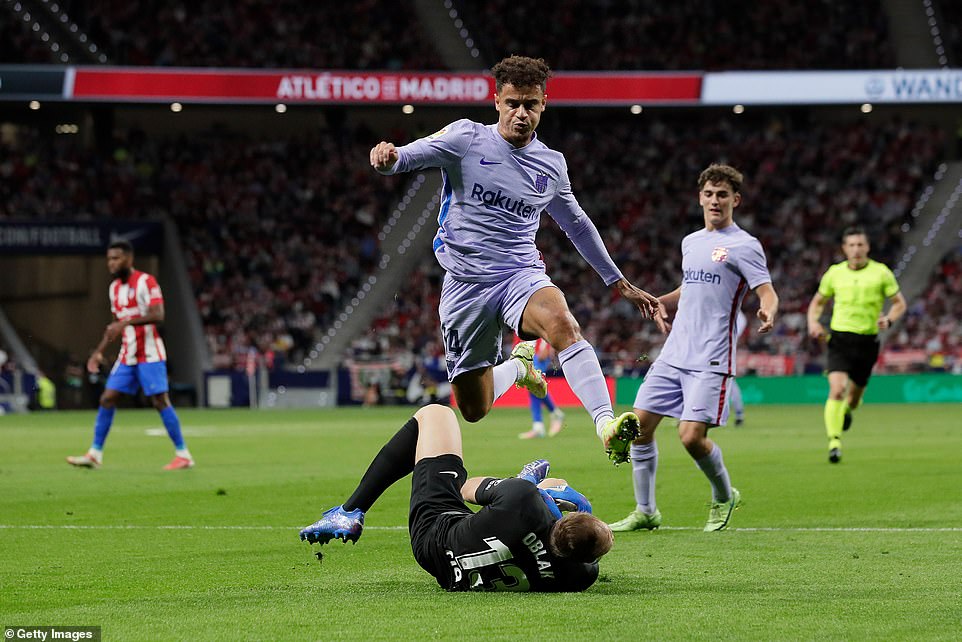 Coutinho was causing problems and his flighted cross was headed across the edge of the six-yard box by Memphis only for a stretching Frenkie de Jong to fail to reach it.

Barcelona had reacted well but Suarez would double the lead before the break. Mingueza got stranded high up the pitch as Memphis lost the ball and Atletico broke.

Ronald Araujo had also been drawn forward to close down Felix but the Portuguese played the ball to Lemar. When he crossed for Suarez the former Barcelona man had his moment.

He took his time with two touches before shooting past Ter Stegen, who had advanced to the edge of his six-yard box, and Gerard Pique unable to block on the goal-line.

It was Barcelona’s youngest player Gavi who created their first second half chance on the hour. He won a 50-50 with Mario Hermoso and charged down the right. From his cross Coutinho shot but Jan Oblak saved. It was his last contribution before Ansu Fati replaced him on 63 minutes. 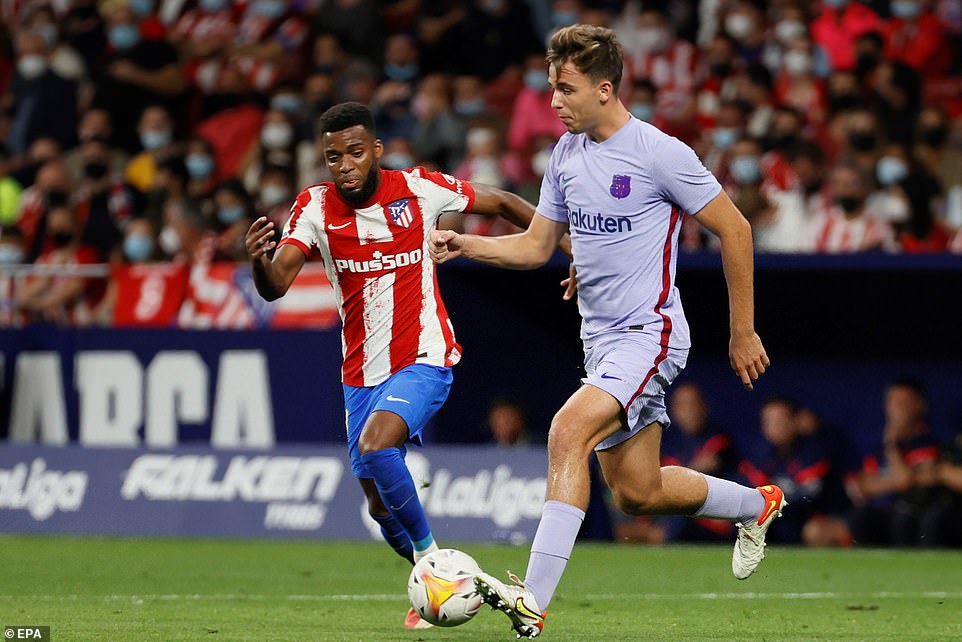 The substitute was immediately a threat winning a free-kick which he sent over and then forcing a save from Oblak after turning away from Jose Gimenez.

With 20 minutes left the other former Barcelona forward Griezmann replaced Suarez and Angel Correa came on for a disgruntled Felix. He didn’t want to go off, Barcelona were glad to see the back of him.

Griezmann immediately raced away from Barcelona’s high defensive line but then over-hit his pass out for a throw-in. Diego Simeone was desperately trying to whip-up the home crowd to roar the team over the line. But on the pitch his team was now siting deeper and giving away too many free-kicks on the edge of the area.

You-know-who would have buried one of them, but without Leo Messi they all sailed over – and with them went Barcelona’s best chances and three more points in the Spanish title race. 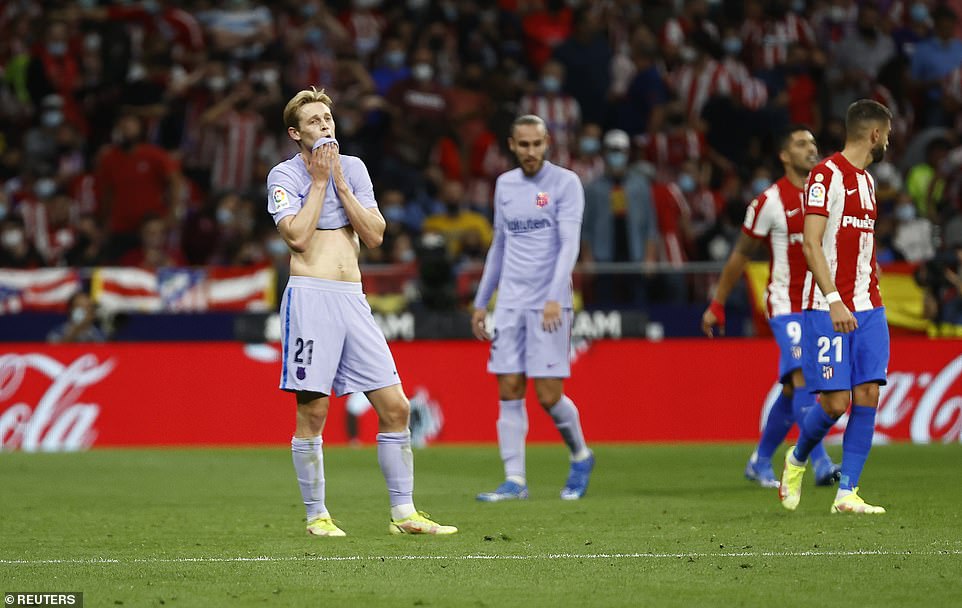 Catch up on all the action from Atletico Madrid's 2-0 victory over Barcelona with Sportsmail's ISABEL BALDWIN.

Suarez: My phone gesture was for those who know I still have the same number

Luis Suarez: Goal, apology... and a celebration for Ronald Koeman?