AC Milan 1-1 Porto: Stefano Pioli's side keep their slim hopes of Champions League progress alive by picking up first point of group stage thanks to Chancel Mbemba's own goal

AC Milan earned their first Champions League point of the season with a 1-1 draw against Porto at San Siro on Wednesday, but the result left the seven-time European champions on the brink of elimination.

If Atletico Madrid beat Liverpool at Anfield in the other Group D clash later on Wednesday, Milan´s exit will be confirmed.

Luis Diaz struck after six minutes to put the Portuguese side in front and they dominated the first half against an under-par Rossoneri side. 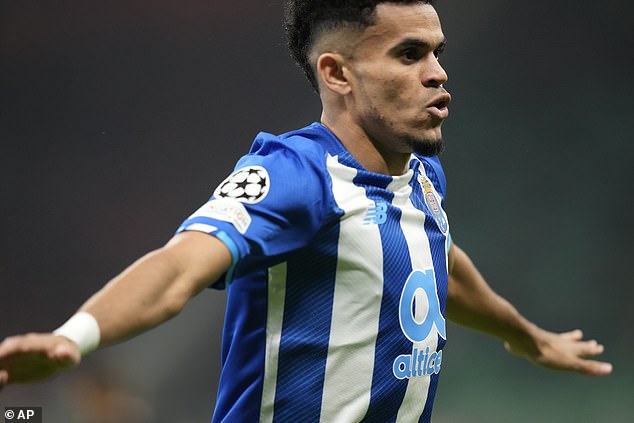 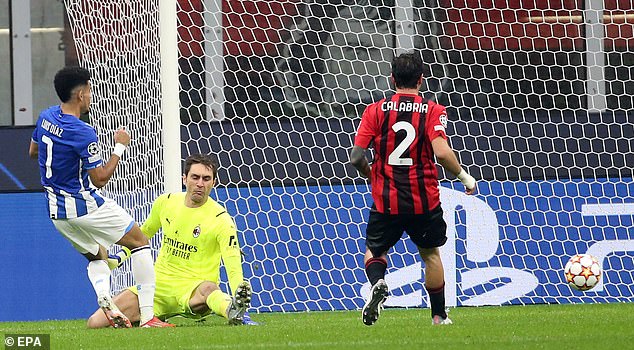 Diaz, linked with a £68m move to Newcastle, slotted the ball past Ciprian Tatarusanu

An own goal from Chancel Mbemba drew Milan level after the break and Zlatan Ibrahimovic had a goal ruled out for offside, but the Italians' wait for a victory goes on.

'It´s tough against teams who are used to Champions League football like Porto or Atletico. Experience is important,' Milan striker Olivier Giroud told Canal Plus.

'We are a young team but I don´t want to make excuses. We also needed a little more luck. We have played some good matches.' It is the first time in Milan´s history that they have failed to win any of their opening four Champions League games.

Porto rose to second place with five points, four ahead of bottom side Milan, one above Atletico in third and four behind leaders Liverpool.

Rossoneri coach Stefano Pioli sprang some surprises by leaving regular starters like Ibrahimovic, Franck Kessie and Simon Kjaer on the bench, possibly with an eye towards Sunday´s crucial Serie A derby against rivals Inter Milan.

The hosts were on the back foot from the start, as Evanilson threatened by shooting into the side netting inside the opening minute before Marko Grujic won the ball high up the pitch and picked out the unmarked Diaz, who finished calmly.

Grujic was twice denied by Ciprian Tatarusanu saves, while a Giroud shot that required a smart stop from Diogo Costa was the Rossoneri´s only chance of note before the break. 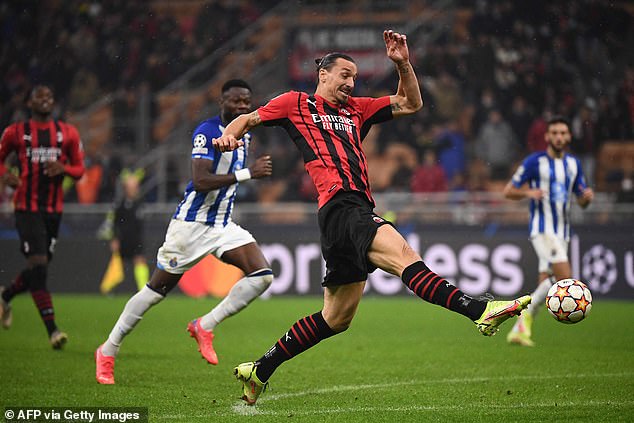 Porto were inches away from doubling their advantage early in the second half when Evanilson´s header hit the top of the bar, but Milan fought their way back into the game against the run of play in the 61st minute.

Giroud´s shot was saved by Costa but parried into the path of substitute Pierre Kalulu, who fired the ball back across the face of goal and Mbemba stuck out a leg to divert it into his own net.

Ibrahimovic´s introduction for the final 15 minutes injected some spark as the Swede netted on a rebound after his initial shot was charged down by Costa, but the goal was disallowed.