Sheffield United striker Billy Sharp is brutally ATTACKED by a pitch invader after Nottingham Forest's Championship play-off semi-final victory, with Blades boss Paul Heckingbottom calling for a 'prison sentence' and condemning 'cowardly' assault Jamie Carragher urges Mo Salah to sign a new Liverpool deal as he warns of past stars who have flopped after leaving the Reds... but Jamie Redknapp insists Virgil van Dijk is the ONLY unreplaceable star at Anfield Klopp: Football will support Jake Daniels Ten Hag needs time & board backing at Man Utd - Blind Is Fernandinho the best Brazilian in Premier League history?

Liverpool have a mammoth month ahead of them with the Quadruple in their sights - going into May with the Premier League, Champions League and FA Cup in touching distance - but there are hurdles on their path to history.

Jurgen Klopp can go down in Liverpool folklore - and indeed English football history - if he achieves a dream that has never been realised by any side since winning four trophies became possible in the 1960s.

With one trophy already in the bag, the Carabao Cup, Klopp will be desperate to end the campaign as strongly as possible and push his glittering Liverpool side to their limits to stake a claim as the best Reds team ever.

It will be far from simple, however, to win even one more trophy - let alone another three - and Klopp faces a number of challenges and obstacles to overcome.

Sportsmail takes a look at the potential problems Liverpool could face on their quest for glory in a crucial month to come. 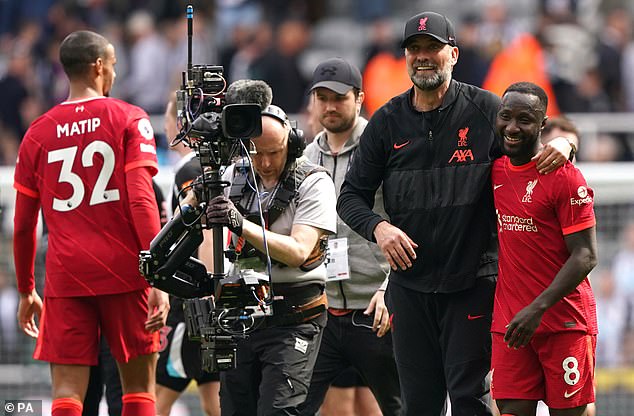 Weighing against Liverpool in their run-in is the fact they have just two games to play at Anfield - versus four away from home - and that could be five games if they reach the Champions League final.

Starting tonight away at Villarreal and possibly ending on May 28 with a Champions League final, the rest of the season could be a lonely experience for the Reds on their travels.

Liverpool will play Spurs at Anfield on Saturday, a tough test against Antonio Conte's men - who are chasing Champions League football - and a real challenge for their title aspirations. 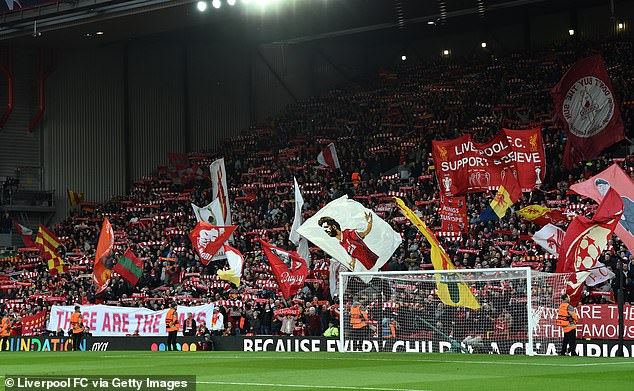 Liverpool have just two home games out of a possible seven remaining this season, a blow considering they are unbeaten at Anfield in the league 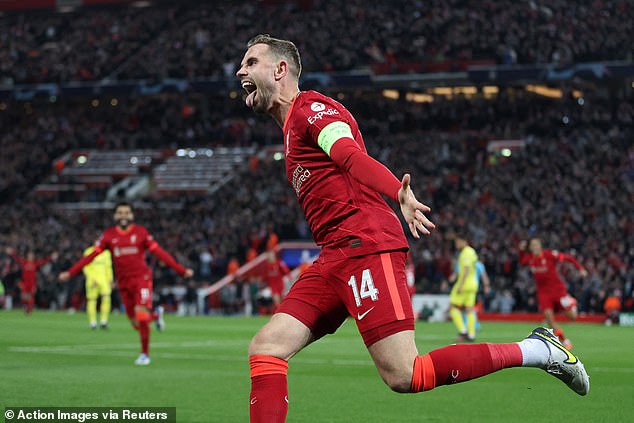 Their only other home game this season is another tricky contest against Wolves, who had been high-flying this season before falling away in the last three games.

Anfield has been a huge weapon for Liverpool in their title charge with the fear their intimidating atmosphere brings. Villarreal's Etienne Capoue has admitted it is like 'hell' for players because fans want to 'kill' them.

The fact Liverpool haven't lost a single home game in the Premier League this season -  winning 17 and drawing three - just goes to show how much they will miss that advantage with their fans on their side.

Guiding the team through an entire season in all four major competitions is a tough ask - and tough on the legs.

Liverpool will be absolutely spent come the summer after a gruelling Premier League season in which they have fought tooth and nail to just to keep pace with Manchester City, while they have already gone the distance in the Carabao Cup and reached the FA Cup final.

As they bid to see off Villarreal in the Champions League semi-final second leg, Klopp will be wary of weary players and he'll have to rotate and chop and change things. Luckily he has the strength in depth to do that. 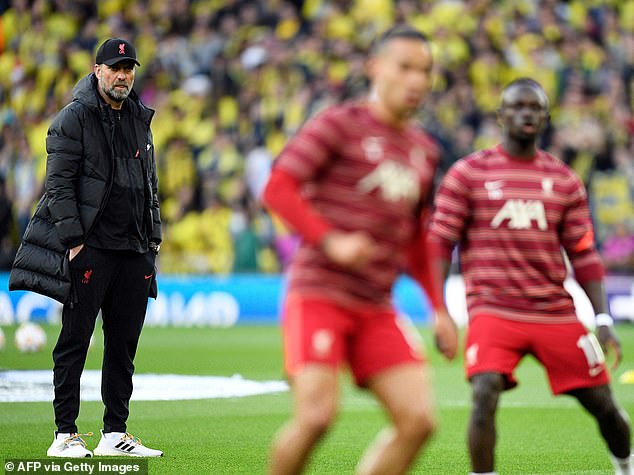 Last month, following a double header against Manchester City in the Premier League and FA Cup semi-final, Klopp underlined the importance of rotation to keep his stars fresh and said he was confident the strategy would help, not hinder the team for the rest of the season.

'Compare the two games at City and you can see how important it is to give different players a rest in specific moments.

'It always makes a difference (making changes). Most of the time it works for the good. We needed it.

'We have 10 games left for sure which is already an insane number and can qualify for an 11th game, which will be difficult as well. It's incredibly tough but it's nice. It's our situation.'

But Klopp being forced to rotate opens the door to mistakes and inconsistency if he cannot play his strongest team available, and he may be forced to make some difficult choices with dilemmas in certain games. 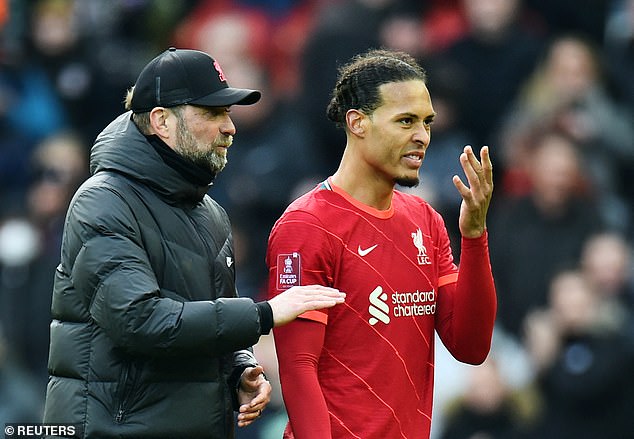 The German has a handful of interchangeable players alongside his key personnel. Ibrahima Konate is the man he sticks by in the Champions League in defence, while in the Premier League he opts for Joel Matip.

In midfield, Alex Oxlade-Chamberlain and Naby Keita are among the players who can be drafted in, while Klopp went for Jordan Henderson, Thiago Alcantara and Fabinho for the Champions League semi-final clash.

Up front, Divock Origi has been utilised and played a part in their 2-0 win over Everton in the last two weeks, while Diogo Jota and Luis Diaz can also be rotated alongside Mane and Salah where needed.

Picking the right players for the right games will be key to steering Liverpool to as much silverware as possible.

Every game is important for Liverpool from now until the end of the season, but there are a handful of huge clashes coming up that will surely define their season.

The first big test in the Premier League is against Tottenham on May 7, a match that Klopp will be worried about after Conte's men gave them a tough game at the Tottenham Hotspur Stadium in the reverse fixture last year - and were unlucky not to win.

Spurs come into that game hungry for the three points themselves knowing if they were to lose and top-four rivals Arsenal beat Leeds, they could head into their North London Derby five points adrift of them. 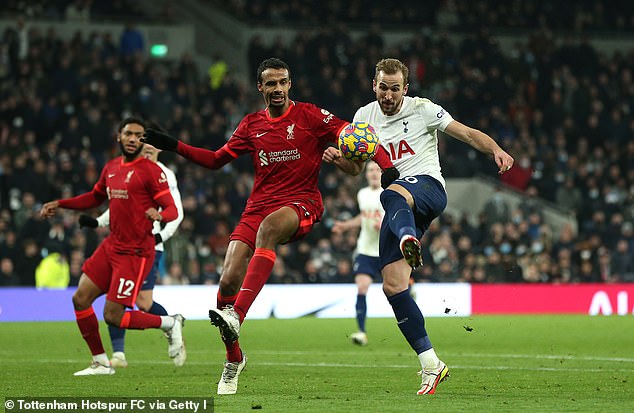 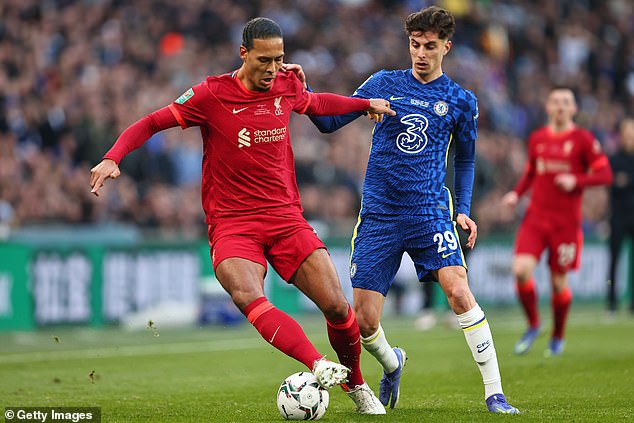 Liverpool have history on their side, with Tottenham failing to beat the Reds at Anfield since 2011 but its nevertheless their toughest league game left this season as they attempt to keep the likes of Dejan Kulusevski, Harry Kane and Son Heung-min quiet.

A trip to Steven Gerrard's Aston Villa is always bound to be an emotional one on May 10 as the former Reds skipper looks to get one over his old side.

Then an FA Cup final at Wembley Stadium against Chelsea follows just four days later on May 14.

Their final league game of the season is against a dangerous Wolves side who are out of form but could provide a stern test with nothing to lose at the end of the campaign - with Liverpool's title race against City likely to go to the wire.

Liverpool's last game against Newcastle was an example of winning games ugly as Keita's first half strike was enough for all three points at an in-form Newcastle side.

With Klopp making five changes - including no Mohamed Salah, Trent Alexander-Arnold or Thiago Alcantara - Liverpool looked a little rusty in the first 15 minutes before grabbing the opener.

Liverpool were still a huge attacking threat despite their changes, but Sadio Mane was guilty of missing a handful of chances - shooting straight at Martin Dubravka despite Liverpool racing forwards in a 3 v 2 counter attack.

Later on Mane fluffed another great opportunity when he somehow fired wide inside the area after playing a one-two with Joe Gomez. 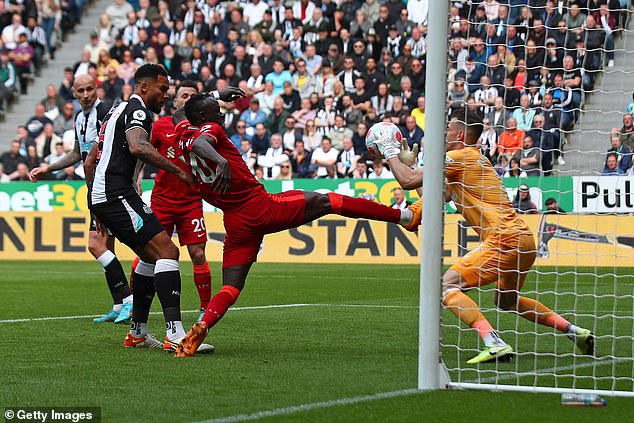 Sadio Mane missed a hatful of chances against Newcastle, with Liverpool somewhat disjointed as a result of Klopp's rotation

Jota also missed a few chances - heading straight at Dubravka before the Slovakian keeper made a leaping save to deflect his effort towards the end of the game - and he also frustrated substitute Salah, who missed after being put clean through.

Earlier in midweek, Liverpool had no trouble sweeping Villarreal aside in the Champions League semi-final, but could have added even more to their first leg score of 2-0.

Klopp will be aware that his rotation policy might blunt his attack somewhat and while the Reds are still picking up results regardless, it is vital that their attacking output does not drop against the top teams and in big games.

The most brutal truth in Liverpool's bid for the Quadruple is that their dream might still end up crumbling even if they win all their remaining games.

Liverpool's destiny is in their own hands when it comes to winning the FA Cup and Champions League, but not in the Premier League, where they trail Man City by a point and require their rivals to drop points in the last four matches. 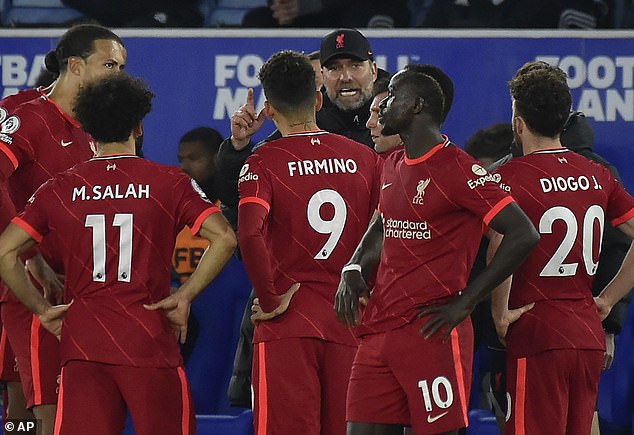 That means Liverpool could beat Tottenham, Aston Villa, Southampton and Wolves in the Premier League, beat Chelsea in the FA Cup final and see off Villarreal to reach the Champions League final - overcoming either City or Real Madrid in the Paris showpiece - and still not win the Quadruple if Pep Guardiola's men will all their games.

Liverpool have memories of a near-flawless season that resulted in disappointment as they earned 97 points in the 2018-19 Premier League season but still finished second to a City team who picked up 98 in an agonising finish.

All Klopp's men can do is focus on themselves, but they'll be hoping their best form and their best performances are enough.

REVEALED: Nottingham Forest could be forced to play their first Premier League game this century behind closed doors after a 'scumbag' fan headbutted Sheffield United's Billy Sharp on the pitch