Jules Kounde's situation 'is causing tension at Sevilla, with the defender desperate to leave but no offers yet - as Chelsea explore different options like Matthijs de Ligt, Nathan Ake and Kalidou Koulibaly'

The REPEAT offenders who superglued themselves to Van Gogh painting: Eco-zealots behind latest Just Stop Oil stunt include 'John Lennon lookalike' who once tied his neck to goalpost and psychology student who blocked M25 and took part in Kingsbury demo

The REPEAT offenders who superglued themselves to Van Gogh painting: Eco-zealots behind latest Just Stop Oil stunt include 'John Lennon lookalike' who once tied his neck to goalpost and psychology student who blocked M25 and took part in Kingsbury demo

Jules Kounde's situation 'is causing tension at Sevilla, with the defender desperate to leave but no offers yet - as Chelsea explore different options like Matthijs de Ligt, Nathan Ake and Kalidou Koulibaly'

So near and yet so far.

Arsenal fans will look back on the 2021-22 campaign with a massive sense of ‘what if?’

For so long it looked like Mkel Arteta’s young side were going to smash all the early-season expectations by claiming a top-four finish and securing a return to the Champions League.

After such a miserable start, which saw them lose their first three games without even scoring a goal, a new look Arsenal started to emerge with summer signings Aaron Ramsdale, Ben White, Takehiro Tomiyasu and Martin Odegaard all making a major impact.

Home-grown stars Bukayo Saka and Emile Smith were starring on a regular basis and it looked like they were going to propel the Gunners back into the big time.

But a small squad and a lack of experience caught up with them just at the wrong time and a poor finish, which saw Arteta’s side lose six of their final 12 league games, led to them being pipped at the post by rivals Tottenham for the final Champions League spot.

It was a hugely disappointing end to a very encouraging season. One that is now impossible to not to view as a big missed opportunity.

Player of the Season

There are certainly a few contenders for this.

Aaron Ramsdale was exceptional after arriving from Sheffield United, producing several stellar performances to make a mockery of the criticism that came Arsenal’s way following their surprise summer move for the goalkeeper.

Centre-backs Ben White and Gabriel Maghales formed an excellent partnership at the heart of defence, while Granit Xhaka was consistently impressive throughout the season in midfield.

But the stand out players were Martin Odegaard and Bukayo Saka.

Odegaard was exceptional at times, especially during the second half of the season and has already proved to be a £30 million ($38m) bargain from Real Madrid.

But Saka has been the star of the show for Arsenal once again. The 2020-21 player of the season scored 12 goals and provided seven assists in all competitions and deserves the award for the second year in a row, even if he did run out of steam a bit in the final weeks of the campaign.

Goal of the Season

Alexandre Lacazette’s goal against Southampton in December was a thing of beauty.

Aaron Ramsdale started the move, receiving the ball under pressure before finding Ben White. Some slick one-touch passing followed involving White, Partey, Tomiyasu and Odegaard before Saka was released down the right.

The winger raced away before putting in a low ball which Lacazette side-footed into the top corner with a perfect first-time finish.

From front to back in about 13 seconds. It was a superb goal that epitomises the way Arteta wants his side to play.

Performance of the Season

This has to be the North London Derby win against Tottenham in September.

After such a poor start to the season, Arsenal had just started to rebuild their campaign with wins against Norwich and Burnley.

But the 3-1 success which followed against Spurs was the moment things really started to ignite.

Arteta’s side destroyed their neighbours with three goals in 22 scintillating first half minutes and served notice to the Premier League that they needed to be taken seriously. 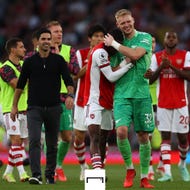 There were other notable displays, including the 4-2 win at Chelsea, which came off the back of three straight defeats, and the New Year’s Day meeting with Manchester City when Arsenal produced what was undoubtedly their best 45 minutes of the season, before they harshly fell to defeat in the second half.

But the win against Tottenham has to top them all.

Disappointment of the season

There are a few here.

The defeat at Tottenham at the end of the season. Knowing a win would have guaranteed them a top four spot, Arteta’s side lost their heads as Rob Holding was sent off and they were beaten 3-0.

The decision not to strengthen in the January transfer window and replace Pierre-Emerick Aubameyang was also a major disappointment as that clearly left the squad short during the second half of the season. 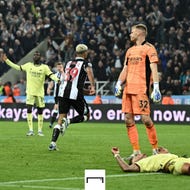 But having said all that, Arsenal still went to Newcastle for the penultimate game of the campaign with their destiny in their own hands. A win at St James’ Park would have left them only needing to beat Everton on the final day to secure fourth spot.

So, to go and produce the totally inept performance that they did, losing 2-0, was pitiful.

That night in the north east has to go down as the disappointment of the season.

There is no doubt that there were plenty of positives from Arsenal’s season.

At the start, hardly anyone would have given them a chance of making the top four, so to go so close with such a young group does deserve credit.

For the first time in a long time, it was enjoyable to watch Arsenal again and that was evident by the excellent atmosphere at games – both home and away.

But despite all that, you just can’t shake off the sense of disappointment that they failed to get the job done.

Fourth spot was there for them and they fluffed their lines at the crucial time, ending a promising season with a big feeling of disappointment.