It may have ended in disappointment, but it’s hard to describe Liverpool’s season as anything other than a success.

What a journey Reds fans have been on. “Make us dream,” reads the banner on the Kop, and Jurgen Klopp’s team did exactly that. Never before has an English club come so close to winning absolutely everything.

As it is they must make do with ‘only’ a domestic cup double, with Premier League disappointment followed by Champions League heartache during the final week of the campaign. Close, but not quite close enough.

But the fact that half a million supporters took to the streets for a celebratory parade last Sunday tells its own story.

There is pride, genuine pride, in what Liverpool have achieved this season, and of the memories and the moments they have provided.

The quadruple may have proven beyond them, but with Klopp having committed his future to the club until at least 2026, optimism should be high at Anfield.

This team will come again, for sure.

Player of the Season

In a way, it was easy. When you score 31 goals, set up 15 more and produce half a dozen or more moments of breathtaking genius, there should only be one contender.

And yet even Mohamed Salah would admit he had serious competition this season.

From Virgil van Dijk, who has performed miracles after coming back from the most serious of knee injuries. The Dutchman made more than 50 appearances in all competitions and his form, particularly in the second half of the season, was of the highest quality.

The same could be said for Sadio Mane, who from February onwards took over from Salah as the team’s go-to attacker.

Trent Alexander-Arnold’s brilliance at right-back was constant, as was the reliable presence of Alisson Becker in goal. All of them, surely, will be the in the PFA Team of the Season.

Goal of the Season

It could only be one of Salah’s specials, and in the end his strike against Manchester City at Anfield in October wins the argument.

There wasn’t even half a chance when the Egyptian received a pass from Curtis Jones on the right corner of the penalty area. He had his back to goal and three defenders for company.

But with strength and skill, he put Bernardo Silva on his backside and left Phil Foden and Joao Cancelo behind. Into the box he went, chopping the ball past Aymeric Laporte before, with his right foot, firing across Ederson and into the far corner of the net. 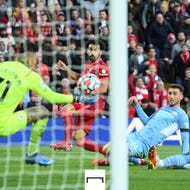 It was magnificent, a big goal in the biggest of games. Salah was in the form of his life at that point and this, as well as the photocopied strike against Watford in his next Premier League game, merely underlined the fact.

Performance of the Season

Take your pick! Maybe you liked the demolition of Arsenal in November, or the sheer dominance of the 5-0 win at Watford a month earlier.

Maybe the battering of Everton in December stands out, the Champions League wins away to Porto and Atletico Madrid, or the 6-0 hammering of Leeds in February? How about the FA Cup semi-final victory over Manchester City at Wembley?

But really, truly, there can only be one answer. 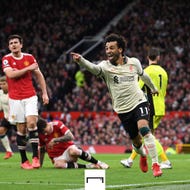 October 24, 2021. Old Trafford. Manchester United 0-5 Liverpool. Four up at half-time, five up inside 50 minutes. Had they really wanted to, Klopp’s side could have scored 10.

The away end sang that day, alright. All day and all night. It will be talked about for years.

Disappointment of the Season

Unfortunately, this came in the very last game of an incredible campaign.

The treatment of Liverpool (and Real Madrid) supporters before, during and after the Champions League final was little short of a disgrace, and the response of both UEFA and certain French politicians has made a bad situation worse.

Having witnessed, first-hand, some of the scenes outside the Stade de France, and having heard countless other stories from fans, it is important that this story is not allowed to be brushed under the carpet. People must be held accountable.

Nobody should go to a football match and end up fearing for their safety, or worse.

All in all, 2021-22 must be viewed in a positive light for Liverpool. After the struggles of the previous season, Klopp and his side showed remarkable character and quality to regroup and come back stronger.

There will naturally be disappointment that they came up short in the two biggest competitions.

Their performance in Paris against Real Madrid was underwhelming, while needless drop points during the first half of the Premier League campaign ultimately cost them dear, even if they were brilliant in hauling back a superb City side in the New Year.

The signs are there that the good times will continue. Signings like Ibrahima Konate, Diogo Jota and Luis Diaz, who dazzled after his arrival at the end of January, should get better and better, and the likes of Harvey Elliott, Curtis Jones, Kaide Gordon and Fabio Carvalho, who will join on July 1, should prove to be serious players for the club in both the short and long term.

A few big calls need to be made this summer – the futures of Mane and Salah chief among them – but with Klopp at the helm, Liverpool should be trusted to get the big decisions right.

And if they do, we can expect to see them fighting for the big prizes once more next season.