Manchester United are preparing for a drawn-out pursuit of Frenkie de Jong this summer and haven't given up on taking him to Old Trafford.

The Barcelona midfielder is a leading target for new manager Erik ten Hag, who is aiming to make five signings in his first transfer window at the club.

De Jong is strongly-admired within the club – and has been watched extensively during his time at Ajax and Barca.

Why do Man Utd want to sign De Jong & will they get him?

But De Jong, who worked with his fellow Dutchman at Ajax, will need to be convinced before he commits to a move to Old Trafford, with sources claiming "stars will have to align" to get the deal done.

As reported by GOAL, Barca are prepared to listen to offers around the €60 million (£51m/$63m) mark. But the main stumbling block appears to be the player’s willingness to leave after three years at Camp Nou.

Ten Hag knows he needs at least one new central midfielder this summer, with Nemanja Matic also set to depart.

Who else could Man Utd try to sign this summer?

Along with De Jong, Leeds’ Kalvin Phillips is another player admired, while Declan Rice is of long-term interest.

United are, however, unwilling to meet West Ham’s £150m ($188m) valuation - and sources close to the England international do not anticipate an approach from Old Trafford at that price.

Meanwhile, United are conscious of being used as leverage in N’Golo Kante’s contract negotiations at Chelsea.

They are long-term admirers of the France international and have been linked with a move in recent weeks.

Kante fits the profile of the style of player Ten Hag wants – but the 31-year-old’s age and injury record would be concerns.

He is entering the final year of his contract at Chelsea and is due for negotiations over a new deal. Claimed interest from United could therefore be used as a bargaining tool.

In what is a vital summer, Ten Hag does not want to be distracted in his planned overhaul and believes all areas of the squad are in need of addressing.

A striker also seen as vital, with Darwin Nunez admired. 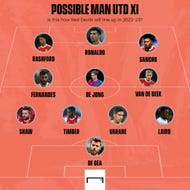