At her home in Blackpool, Natalie Aspinall has a 25-year-old local newspaper cutting kept from the days when she was taking her first steps on the road to becoming a referee.

Just 15 years old, Aspinall had started a refereeing course based at a local working men's club after her father Billy persuaded her it would pay better than a paper round.

Aspinall tells Sportsmail: 'It was in my scrapbook and the headline was: "Teenage girl sets sights on the Premier League". 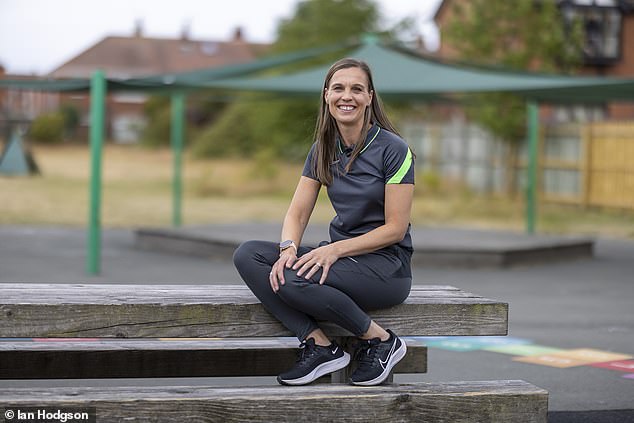 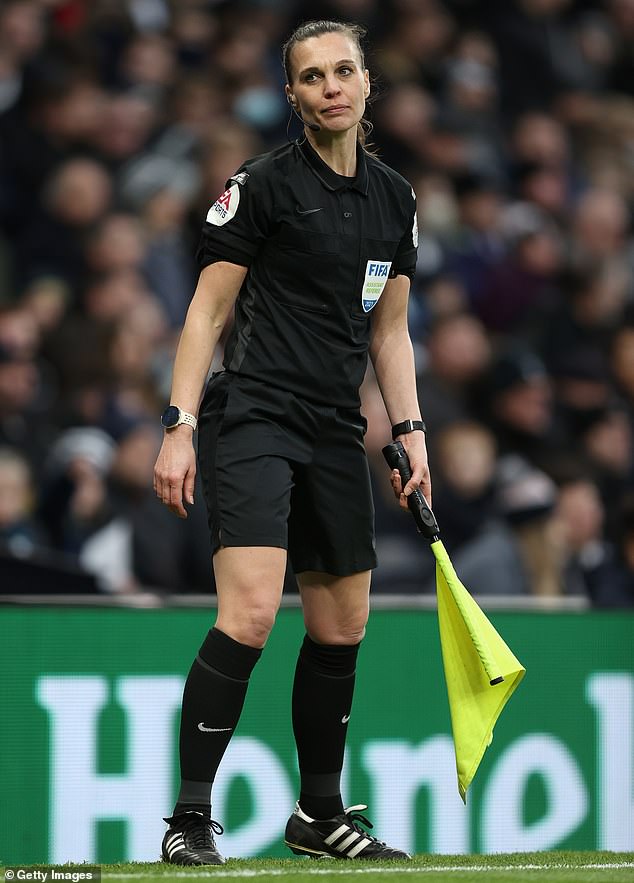 'I remember the boys at school laughing at me when they saw it. They thought I couldn't do it because I was a girl. But that was all those years ago when things were different.'

Aspinall is 40 now and a mother of two girls. She will become only the third woman to officiate in the Premier League after being promoted as an assistant referee following six years in the EFL.

'I am very excited and of course a bit nervous,' she admits. 'But I know I'm here because I deserve to be.

'Whatever success I have, some will always just see the fact I am female. But a lot of the boys (referees) have known me so long now as I've been around a while. 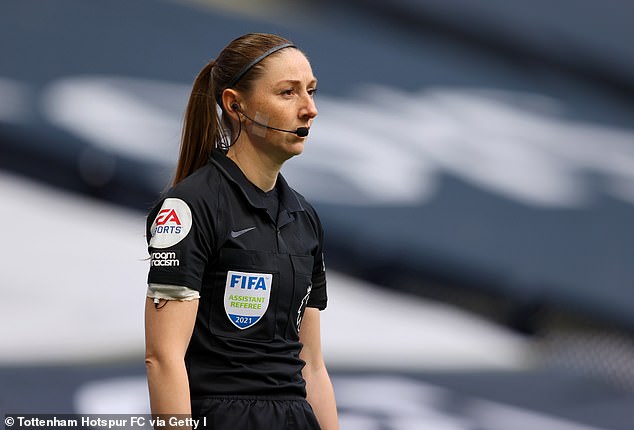 'At the first Premier League referees' training camp this summer, one of them said to me that when someone gets promoted it always feels as though there is someone different in the room. But with me he said it was more like, "Oh yeah, Natalie is here".

'He didn't realise the impact that comment had on me but it was really powerful. I really valued that.'

Aspinall had no particular interest in football as a young girl. But her dad was a local referee and when she broached the idea of a paper round, he had a better one.

'My friend got £12 for a paper round and I wanted one so I could spend the money in town at the weekend,' she recalls. 'My dad said "no way", that I wouldn't get up each morning.

'I had no interest in refereeing, running around in the wind and rain telling boys what to do. But he said I'd get £12 for just an hour and I said, "Bingo! Sign me up". 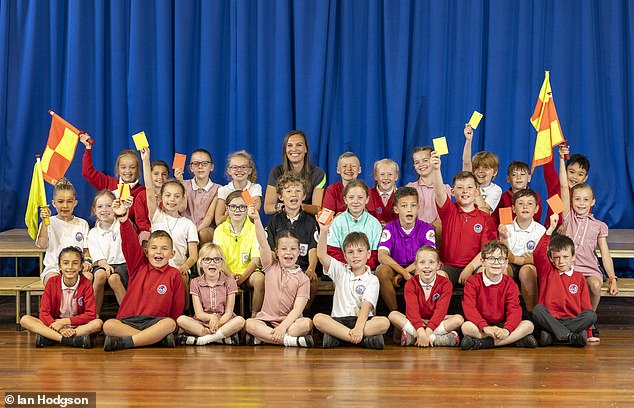 'I got a bug for it and it became something that I just did. Twenty-five years ago there were no girls teams around. So my route was boys and then men's football. But it became part of my life.'

During her years forging a career in the game, Aspinall has encountered the dreary sexism familiar to so many who have tried to make their way in what, to some, should always be a man's world. Some of it has been casual, some more premeditated. At times it felt as though the glass in the ceiling would prove too tough. Ultimately it did not.

'Reaching this level was something I wanted to do, but was it achievable?' she adds.

'Some seasons it felt like it wasn't. But there has been some really good progress in the last few years and it felt like something I could do if I worked hard.

'There could have been times when I thought it was too tough, simply because of some of my grassroots experiences.

'My first course was at a local working men's club. I walked in with my dad. All men drinking beer. I learned to be a referee in that environment.

'But your parents have your back, don't they? My dad came to every game with me. He would walk with me off the pitch at full time if I needed it. He would pick my bag back up after I had thrown it down because I had cried after someone had not been very nice to me. 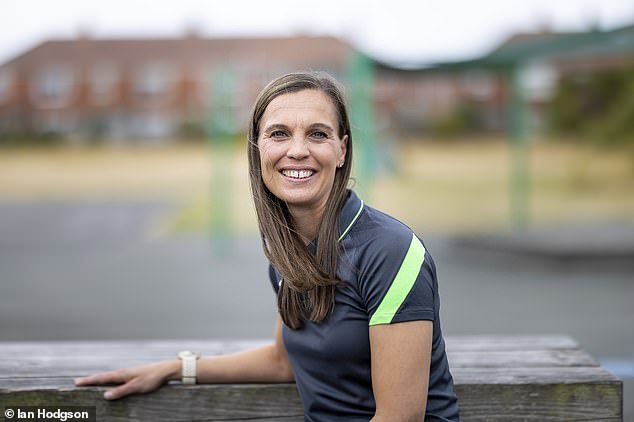 'But all referees go through that in their early career. I did my course and my exam and then went out and refereed on the playing fields just down the road. At that age I was probably motivated by the money but as I have risen up I have felt there was something to prove.'

Aspinall is talking to Sportsmail at the Our Lady of the Assumption Primary School in Blackpool. There to hold a fun refereeing session for the pupils, it is particularly poignant as she has just halted her own career as a teacher to become a full-time PGMOL match official.

With Wendy Toms and Sian Massey-Ellis preceding her in the top division, she feels indebted to both and is particularly close to the latter, who is about to start her 12th year in the top flight.

'It's important not only that we support each other but are there for anyone else coming through,' she reasons. 'I have known Sian for many years and she is a friend. All we want is to go out and do the job and be seen as a match official and not anybody different. 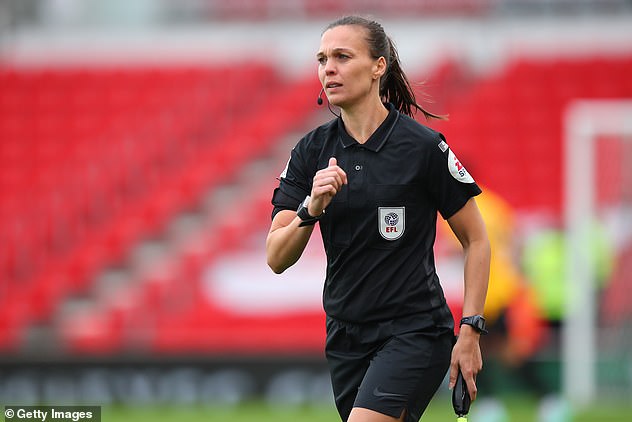 During her years forging a career, Aspinall has encountered the dreary sexism familiar to so many who have tried to make their way in what, to some, should always be a man's world

'Society has moved on and we all have more responsibility as adults to challenge people. Is your opinion correct? Is that the right thing to say?

'Sometimes a referee will say he had forgotten what it was like to walk out on to the field with me as the reaction is always a bit different. Usually I am too busy focusing on what I am there to do. I just want to be seen as a good match official and do what is expected.'

These days there is a much closer relationship between the PGMOL and the female officials of the Women's Super League. 'It really helps to have that support and communication,' Aspinall says.

She hopes that the first female Premier League referee will soon be with us and believes a pathway is now established for that to happen.

More pressingly, she is waiting for news of her first Premier League appointment and laughs that two tickets have already been reserved in her mind.

'Yeah my mum and dad are very proud and will both be there,' she smiles. 'Mum always took care of the kids while I was at football and didn't come to many of my matches.

'But she is quite excited about this one. So am I.' 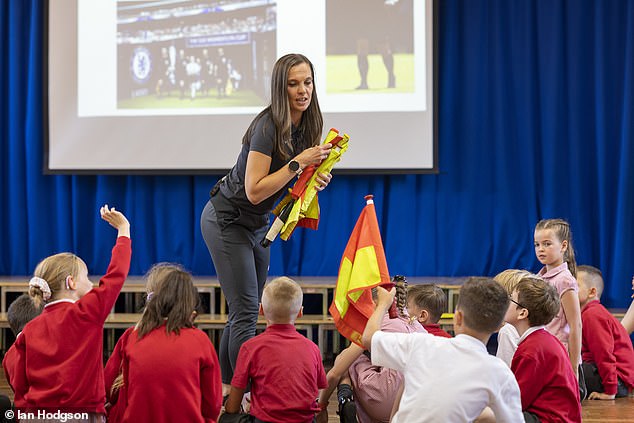