TREVOR BIRCH: The BBC's decision to scrap the classified football results is a shame but hardly a surprise... they've been reducing coverage of the EFL for years now It's all new to us, it's pure EXCITEMENT: As Nottingham Forest prepare for their first home game back in the Premier League, local lad and vice-captain RYAN YATES explains the giddiness sweeping the city  Frank Lampard insists there is 'an extra eye' on him and former England team-mate Steven Gerrard to 'prove themselves as managers' ahead of his Everton side's trip to Aston Villa GRAEME SOUNESS: For a young man who hasn't achieved ANYTHING in the game, Tyrone Mings has a hell of a lot to say… PLUS, why Jurgen Klopp needs a new craftsman in Liverpool's midfield Don't panic! Manchester United boss Erik ten Hag claims everyone is remaining calm at the club despite dismal start to the season with home defeat by Brighton amid a wretched transfer window

Aaron Ramsdale arrived at Arsenal from Sheffield United just over a year ago amid a storm of social media abuse from fans telling him they didn’t want him at their club. Things got so bad for the goalkeeper, who signed from Sheffield United in a £25 million ($30m) deal, that he had change his own accounts so that he could only view comments from those who were closest to him.

The revelation is something Ramsdale shares during the opening episode of Amazon’s highly anticipated All or Nothing Arsenal documentary, which launches on August 4 when episodes 1-3 are released.

Ahead of the launch, Ramsdale – who silenced the internet trolls with a superb debut season with the Gunners – has opened up further about what he faced ahead of his move to north London and revealed why he was never tempted to turn comments back on when his performances started to earn him rave reviews.

“At the very start, it was difficult,” he said. “I had a lot of negativity around the signing, with idiots online saying 'Don’t sign!'

“Not necessarily death threats but threats saying ‘We know where you live’ and things like that, trying to scare me.

“Quite quickly I turned all that stuff off. Social media for me is a place to communicate with my friends and with the fans as well, but with limits on who can actually reach me.

Ramsdale is far from the first player to speak up about the abuse he has had to face online.

It’s something players have to deal with day in, day out, with Arsenal midfielder Granit Xhaka having been the victim of some of the most vile comments imaginable over the years. The abuse aimed at Ramsdale as his move to Arsenal progressed was mainly centred around the fact the club were spending such a large amount of money on a keeper who had just suffered consecutive relegations from the Premier League, with Bournemouth and Sheffield United.

Many felt Arsenal were wasting their money and they made their feelings clear on social media, with the goalkeeper’s name often seen trending on Twitter, such was the heated nature of the debate around his arrival.

For Ramsdale, the decision to restrict what he could see online was a simple one. Not just for him, but for his parents and those closest to him.

“It was safer for me, but also my family as well,” he said. “My mum and dad are obviously on social media. They don’t really know what they are doing, but it’s quite easy for them to type in Ramsdale on Twitter to get to my page and end up on a page where there is a lot of negativity and abuse.

“And then they read it and get upset. So, it did make me feel a lot safer.

“But I knew coming in that the only people that I needed to impress were my team-mates and then obviously the manager who brought me in and had faith in me. I needed to listen to them and the close ones around me.

“So, as much as I had to turn it off because it got too much, it wasn’t too much for me in terms of introverting myself.”

After completing his move to Arsenal, it didn’t take long for Ramsdale to start silencing his doubters.

He replaced Bernd Leno as Mikel Arteta’s No.1 after just three league games and made a series of stunning saves as Arsenal’s disappointing early season form was turned on its head. 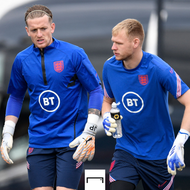 Now, a year on, Ramsdale is battling it out with Jordan Pickford to be first choice for England at the upcoming World Cup in Qatar and is going into the new Premier League campaign having been voted third by Arsenal fans in the club’s 2021-22 player of the year award.

But even though the 24-year-old is currently riding on the crest of a wave, he will not be turning his social media comments back on any time soon.

“No. Never,” he said. “You are just setting yourself up for a downfall. As much as I love the fans, they don’t really have an opinion on what we do on the pitch.

"The people I need to impress, like I said, are the manager, the coaching staff and ultimately my team-mates. If I have their trust, then I’ll have the fans' trust as well.”

Ramsdale features heavily in the first three episodes of the upcoming All or Nothing documentary.

There is insight into his first day at the club, while the cameras also follow his family as he makes his Premier League debut against Norwich at Emirates Stadium.

What becomes abundantly clear is how close the family is and how his parents live and breathe every moment of his career with him.

You see the pride on his mum’s face as he runs out to start at the Emirates for the first time and you see the pain on his dad’s as he watches his son constantly having to play the ball out from the back.

“He hates it,” Ramsdale laughs. “Especially now. He tells me week in, week out to stop passing it into midfield because it gives him a heart attack.

“I think in previous years it was the other way round, my mum was probably the one struggling, with losing and relegation and things. I think that affected her more than him – he knew the type of person I was.

“Now it's the other way, where I have a lot of responsibility on the ball and it gives him more of a heart attack than my mum. He walks in and out of the box 24/7 throughout the game. It's just one of those things.” 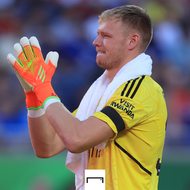 Family life is very important to Ramsdale. He puts everything he has achieved in his career down to his parents. Without them, he is adamant he wouldn’t have even got close to making it in the game.

And he hopes that if fans take anything from the Amazon documentary, it will be how difficult being an elite footballer can be on players and those closest to them.

“It’s one of the best jobs in the world, but one of the worst at the same time,” he said.

“Don't get me wrong, this isn't me preaching like 'Oh everyone feel sorry for us', but the time away from families, kids, living out of a suitcase, travelling.

“The stress you put on yourself, the stress you have in terms of the fanbase. One weekend you're living on cloud nine and winning games, and the next week you lose against a team you shouldn't lose to and it's doom and gloom.

“I just hope that with what comes out they (the fans) get to see that we are just human, and you get to see us enjoying ourselves but, at times, we are suffering together.

“I think that's the hardest thing to get out. Everyone thinks football is easy, you're on the pitch for two or three hours and you go home, but it's just not like that.

“You're travelling 24/7, you're in the gym. But like I said it's not me moaning saying we want some sympathy, it's just the facts of the job.”

Manchester United Supporters' Trust open consultation on fan share proposals... as the club moves a step closer towards delivering the scheme that would offer a SIGNIFICANT stake in the ownership of the club