The European Diversity Awards has released its shortlist ahead of the annual ceremony in November, with business leaders, firms, charities and highly commendable individuals all up for top honours.

The awards, in association with headline sponsor UnitedHealth Group, celebrate leading diversity and inclusion champions while recognising achievements across race, age, sexual orientation, disability, gender identity and religious belief over the past year.

Global corporations like Lego Group, WarnerMedia and Premier League are in the running for accolades alongside notable individuals including Labour councillor Philip Normal and NHS hero Noni Nyathi plus incredible charities like the Liverpool-based Oliver King Foundation.

The foundation has worked tirelessly for the last decade to install defibrillators in schools across the country while lobbying the government to pass legislation making it mandatory for every institution to have the life-saving equipment installed as standard. Progress towards legislation took a major step forward this year when the foundation met with the Secretary of State for Education and parliament took action to pass this bill. 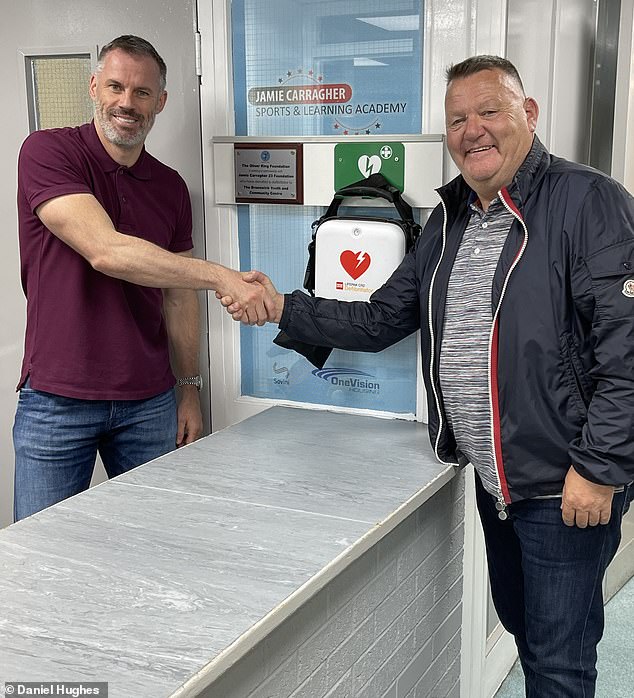 Jamie Carragher meets Mark King from the Oliver King Foundation, who are shortlisted for a European Diversity Award for their work to install defibrillators in schools across the country

Kellogg Company, who are based in Manchester, have been shortlisted for a Diversity Team of the Year award while BBC, ITV and Channel 4 will all battle it out under the Marketing Campaign Category.

The awards ceremony will take place on November 11 at The Landmark Hotel, London, hosted by actress and author Sophie Ward.

Linda Riley, who is the European Diversity Awards founder, said: 'These awards shine a light on those who have worked tirelessly to champion diversity and inclusion during what has been an extremely difficult 12 months.

'Every nominee has made real achievements in race, age, sexual orientation, disability, gender identity or religious belief over the past year.

'Our awards ceremony will take place on November 11 and will be a huge celebration that's needed now more than ever.'

Among those nominated are activists Margot Szutowicz, Assa Traore, and Rokhaya Diallo, alongside Yasmin Diamond of IHG and Lottie Moor of TikTok.

TikTok marketing manager Moor said: 'It's incredibly important to me that, in every aspect of what I do at TikTok and beyond, I accurately share with passion and care the stories of those around me, provide safe spaces for communities to be themselves, and elevate people's experiences with the platform I have. 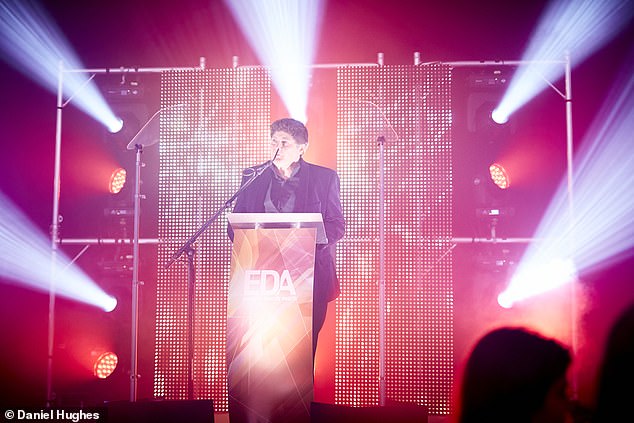 Linda Riley, who is the European Diversity Awards founder, is pictured hosting a previous event

'To be recognised for this is an absolute dream come true. For me, diversity doesn't end with the experiences that I personally have as an out, queer woman in the workplace. Diversity, equity and inclusion is a never-ending commitment journey, of which I'm exceptionally proud to be a part of with TikTok.'

Launched in 2010, the European Diversity Awards have been promoting diversity and inclusion for eleven years. The pandemic has exposed the importance of inclusion, particularly with regards to disability and LGBTQIA+ services, and with the 2020 Awards cancelled due to COVID-19 restrictions, the 2021 Awards hold poignant meaning.

Vice president of diversity, equity and inclusion at UnitedHealth Group, Ouraphone Willis, added: 'We are delighted to be the new headline sponsor of the European Diversity Awards, which shares our commitment to foster an inclusive, equitable and diverse culture for our team members and those we are privileged to serve.

'On behalf of UnitedHealth Group, I would like to congratulate all who have been nominated for this year's awards.'

With nominations across sixteen categories, the European Diversity Awards 2021 is united by a dedication to diversity and inclusion, with this year's awards recognising the impact of marketing, campaigning, media diversity, social mobility, and more on positive representation across Europe.

Planning to stop Ronaldo, advice from Ferdinand and learning from Benitez, Everton defender Godfrey reveals all