Jurgen Klopp insists Liverpool have not been mentally broken by the challenge of pursuing Manchester City and believes his team are ready to strike back.

Liverpool could be 12 points behind league leaders City by the time kick-off against Chelsea comes around on Sunday and many believe events on Tuesday — when Klopp’s side were beaten 1-0 by Leicester —will prove decisive in the title race.

It shows how high City’s standards are that even with 41 points from 19 games — and just two defeats so far — the perception is that Liverpool will not be able to maintain the unrelenting pace that the defending champions are setting. 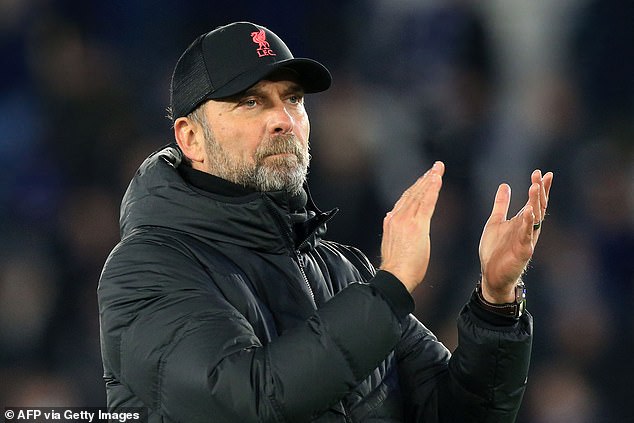 Klopp was shocked by his side’s display at the King Power but he does not believe it was the product of his players feeling worn down by trying to go stride for stride with City. If anything, he is adamant their appetite for that fight has never been bigger.

‘It’s not mentally draining,’ said Klopp, who doesn’t know what team he will start with at Stamford Bridge due to three new Covid cases in his squad. ‘We are used to it. You asked us two years ago when we were ahead, you said, “Oh no! City are able to do ridiculous things!”

‘When City were champions (in 2019) we both won the last 15 games pretty much. So it’s not mentally draining — it’s the situation. We want to have that competition, it’s all fine. City are there to beat, but to do that you have to be perfect. 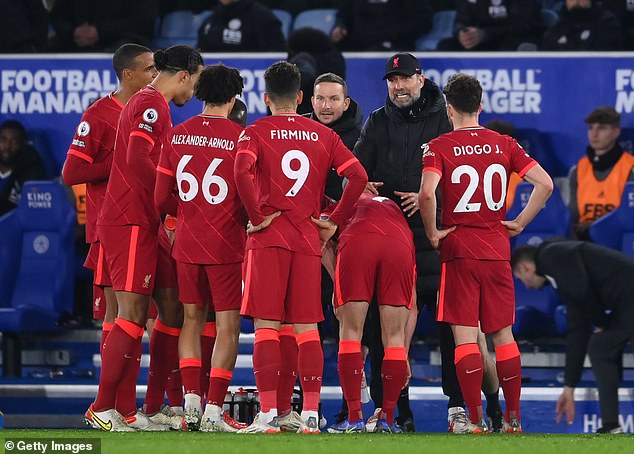 ‘You can see already it is getting much more exciting for you. The last few press conferences we always talked about the same things.

‘Now, because we lost one game, you see how the focus changes — not for us but for the outside world. Thank God we are not open to the outside world, it means we are here together and allow ourselves to stay positive and deal with all the difficulties we face.’

And there are difficulties for Klopp. He is about to lose Mohamed Salah, Sadio Mane and Naby Keita to the Africa Cup of Nations, while Thiago Alcantara and Takumi Minamino are unlikely to be involved at Stamford Bridge due to injury and Andy Robertson remains suspended.

The German looked jaded on Friday as he faced the cameras; the challenge he faces is one each Premier League boss will recognise — not knowing which players will be healthy from one day to the next — and there is no doubt the pandemic is taking a toll. 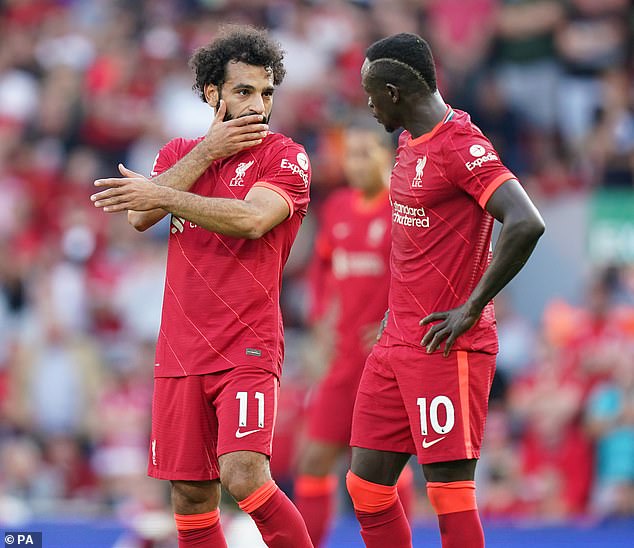 But he also made it clear that the thought of conceding defeat is far from his mind and given his teams historically get stronger in the second half of the season, he does not understand why one blip should be greeted with such dismay.

‘I’m pretty sure we will show a positive reaction,’ said Klopp. ‘Everybody was really suffering. It’s not as if anybody on the plane home (from Leicester) wanted loud music playing or anything. We were really hit by it, we didn’t expect it.

‘We have to go through it but the good thing about the English football schedule is that you have to play all the time so you have the chance pretty quickly to show a reaction. I don’t see any mental reason why we should not strike back from that performance.’

Liverpool have failed to win over half of their January games since Jurgen Klopp arrived in 2015... with Mo Salah and Sadio Mane off to AFCON and Man City now nine points clear, could the Reds be about to bow out of the title race?

MARTIN KEOWN: Pep Guardiola's tactics to evolve his team have turned Man City into a Covid-proof winning machine while Liverpool and Chelsea are too reliant on their stars