Football Manager tends to have a classic problem which replicates an issue real life football managers have, well at least the successful ones.

When you have an excellent set-up, do you overhaul and revamp or do you try to extract more from what you have?

There are risks to both. Tottenham are still trying to recover from not spending a penny in the summer of 2018, with Mauricio Pochettino having rinsed everything out of his team. But then Ole Gunnar Solskjaer is now realising throwing millions at Cristiano Ronaldo, Jadon Sancho and Raphael Varane may have created more problems than it has solved at Manchester United. 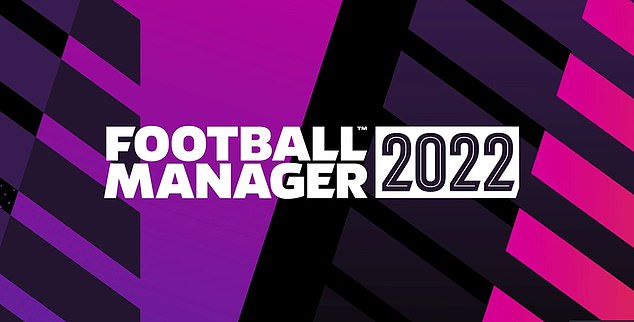 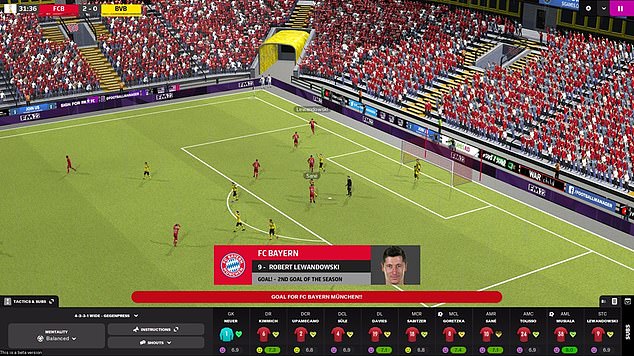 As ever, leagues across the world feature including a full licenced use of the Bundesliga teams

This year, those folks at Sports Interactive have opted for the former, or perhaps the vintage Claudio 'tinker man' Ranieri ploy, to try and tidy up the minor annual additions to the game which have multiplied over the years and led to a stats overload.

Through accumulation their overlap had become as messy as a Paul Scholes challenge to engage with - and to the eyes at least - just as painful too.

The results are huge though - big enough to almost class it as a revamp. FM22 isn't just a small update with an updated player database to trade off. It may change the way you now play this ever popular management simulator.

For instance let's start with tactics. With the game having a full Bundesliga licence I ventured over to Germany and had an experimental playthrough with Bayern Munich.

In FM21, a 4-2-3-1 formation with gegen press worked wonders whether I was in the Premier League with Leicester City or in the National League with Notts County (If anyone at Meadow Lane is reading, I've cracked the code to get you back into the Football League... just saying).

This appeared to be the same case again in FM22, until late in games when my players seemed to fatigue more than usual, which then carries over from one game to the next in a negative feedback loop. 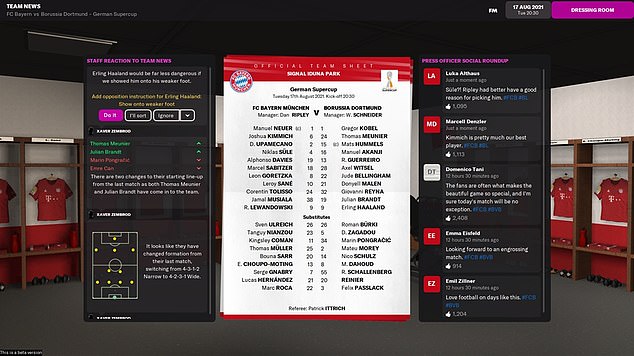 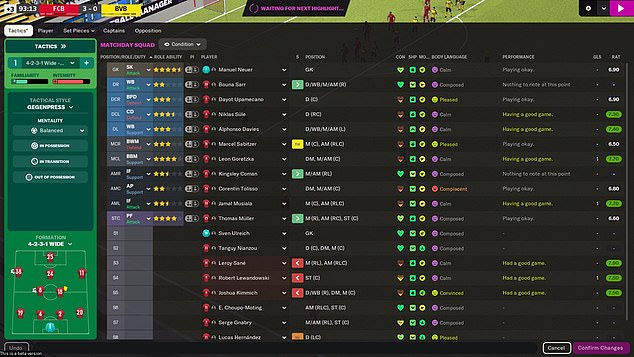 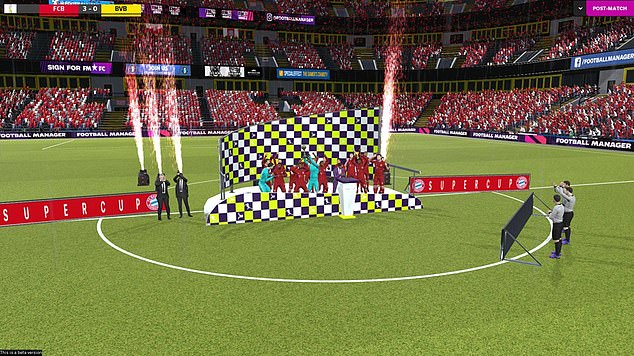 So plug-in-and-play gegen press for 90 minutes is no longer an option - at least if I didn't want to ruin Robert Lewandowski before the end of September. The high pressing tactic in my experience has to now be managed during a game and that's more reflective of a real football match where you see teams ease off at points during an encounter. It also means I need a Plan B... does a flat 4-4-2 still work, anyone?

Or maybe I could start playing a wide centre-back? It's a brand new addition for FM 22 so if you want to experiment a new way of playing three at the back or drag teams through the football pyramid right up into the Premier League like Chris Wilder's Sheffield United - it's a new option for you.

Here is where the aforementioned clear up comes in though. Sometimes you can have too many stats to try and make sense off. The FM equivalent of 'If anything, he's hit that too well, Clive.'

There is now a datahub which condenses many statistical elements from the game into one handy package for you to analyse throughout the season, whether you are not creating enough chances or conceding too many and much, much more.

You can customise this to filter out the stuff you are not interested, meaning you will only see the stuff that is important to you without being overwhelmed with streams of graphs and stats. 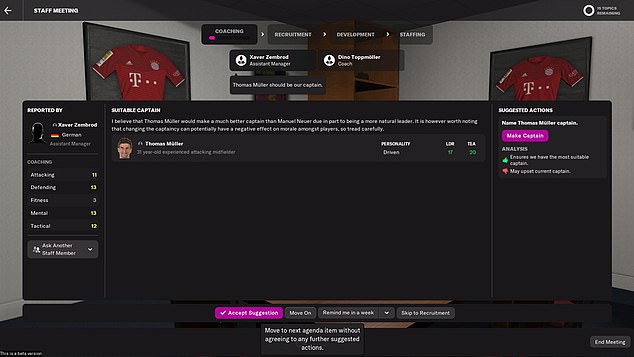 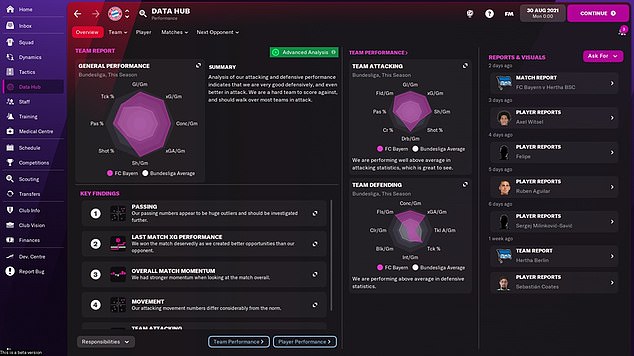 There is also a clear up of player developments around the club. Player's social standing in a squad, youth team players' growing ability and more are now packaged into a weekly meeting with backroom staff who will keep you up to date with the important matters that in previous versions you either missed or just could not be bothered to check.

Even deadline day is fun now. Previous FM games saw little incentive to wait around until the end of the month to complete transfer business, and the deadline day aspect just seemed to drag out a standard FM day longer than usual.

Now though there are bargains to be had, deals to be haggled, agents to duel with. Play your cards right and you could land an unsettled player for a vastly reduced fee. Again it changes the way you play the game and perhaps your approach to the transfer market. It's also just a whole load of fun trying to resist an impulse buy as you see the hours tick down. It's a really big improvement on previous additions.

No longer are you going to be the certain smart cookie for getting all your business done in July like in a perfect world. Try playing as Manchester City and see how much you could have bought Harry Kane for last summer.

As ever with the FM series, if the full fat option is just too overwhelming, there are stripped down ways to play the game for those with no interest spending a whole evening trying to devise the perfect training session, or even delegating to in-game staff. 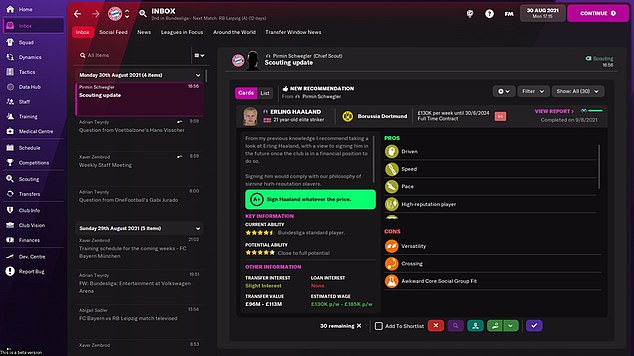 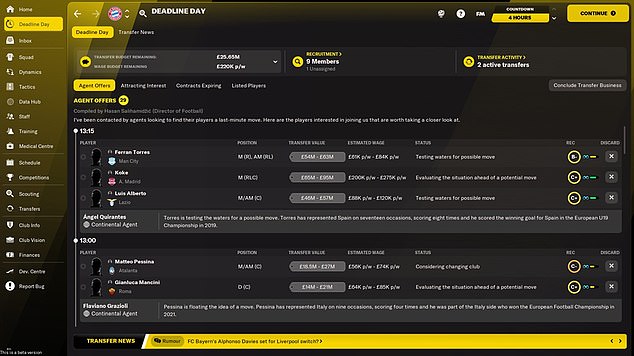 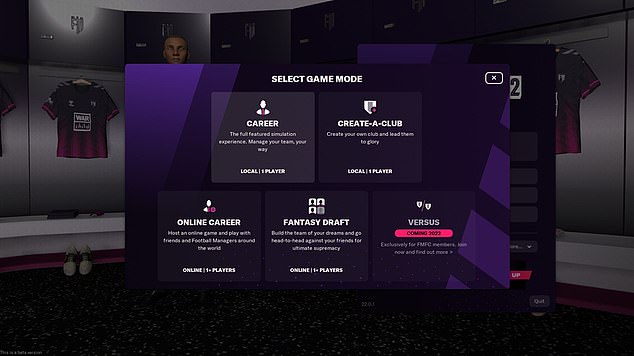 FM Touch on the Nintendo Switch offers a more simplistic and perhaps enjoyable way to play the game without staying up to 3am in the morning trying to figure out why your attacking xG stats are decreasing. And if even that is too much or you just want to kill a bit of time on a small commute there is an FM Mobile version which is even more condensed.

Like every good team there are still weaknesses in FM22. While this addition does deploy new ways of making you think, there is little visually to bring new excitement. Sports Interactive claim to have improved the match engine in the way players interact.

Yet I have not noticed much of significance as an upgrade compared to previous additions - certainly in a way that would greatly impact the enjoyment factor of the game. It may be a case I have not spotted them.

Let's be honest though, I'm nit-picking here and I'm just trying to find something significantly wrong with the game and it's proving more difficult than to make Erling Haaland agree to my lowball salary offer for a £96million move on deadline day as I look to stay in my wage budget.

It's only taken a few small tactical tweaks to make this feel like a departure from FM21 and crucially it feels like a brand new and better game.

So he CAN press after all! Cristiano Ronaldo made more pressures against Arsenal than in any of his previous Manchester United appearances this season in the latest sign he suit new interim boss Ralf Rangnick's tactics