West Ham are granted planning permission to increase their capacity at the London Stadium to 62,500... a move set to make the venue the largest club ground in the capital, ahead of Arsenal and Tottenham

Solskjaer stays... FOR NOW: Manchester United boss given more time to turn things around after 5-0 Liverpool mauling - but he fears for his long-term future with board set to review his position in December Borussia Dortmund 'eyeing a swoop for Jude Bellingham's 16-year-old younger brother Jobe' two years on from splashing out £30m to land Three Lions star from Birmingham City Mauricio Pochettino 'still Manchester United's number one choice' if they sack Ole Gunnar Solskjaer with the Paris Saint-Germain boss 'highly rated' by club legend Sir Alex Ferguson

Here was Manchester United’s season encapsulated in a series of moments. There was a degree of brilliance, alacrity in attack and synchronicity among strikers as they crafted a goal at the end of the first half.

A touch from Scott McTominay to Mason Greenwood saw the ball swept on to Bruno Fernandes. Ever alert, the Portuguese played in the onrushing Anthony Martial. It was too much for Everton.

Ben Godfrey had been drawn out of position, Martial had the run on him and even as he and Yerry Mina dashed across to block his pass they only deflect the strike past Jordan Pickford. And in a sense this was all fine. Pick brilliant players and they will produce brilliant moments. Quality eventually gets its way. 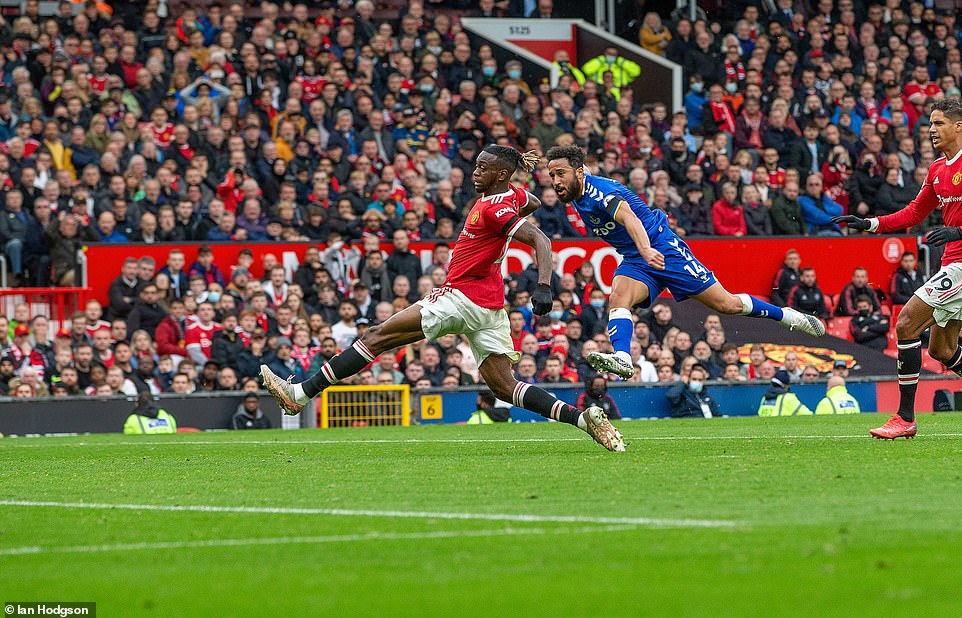 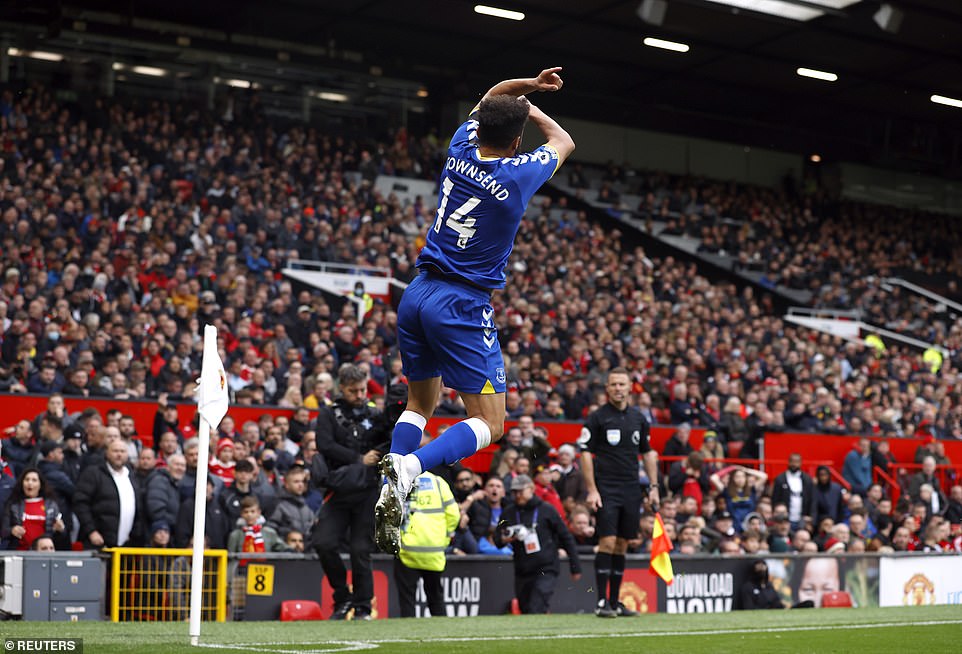 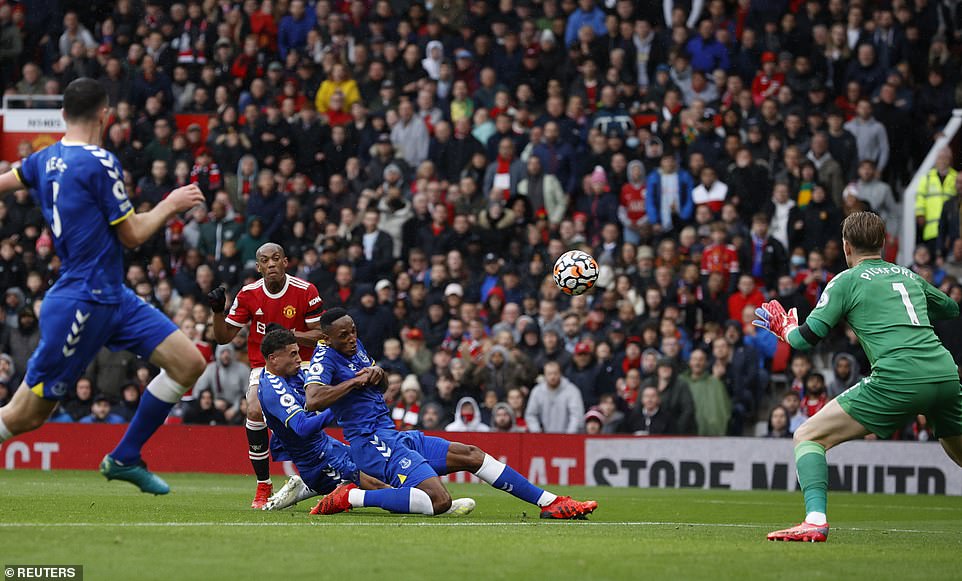 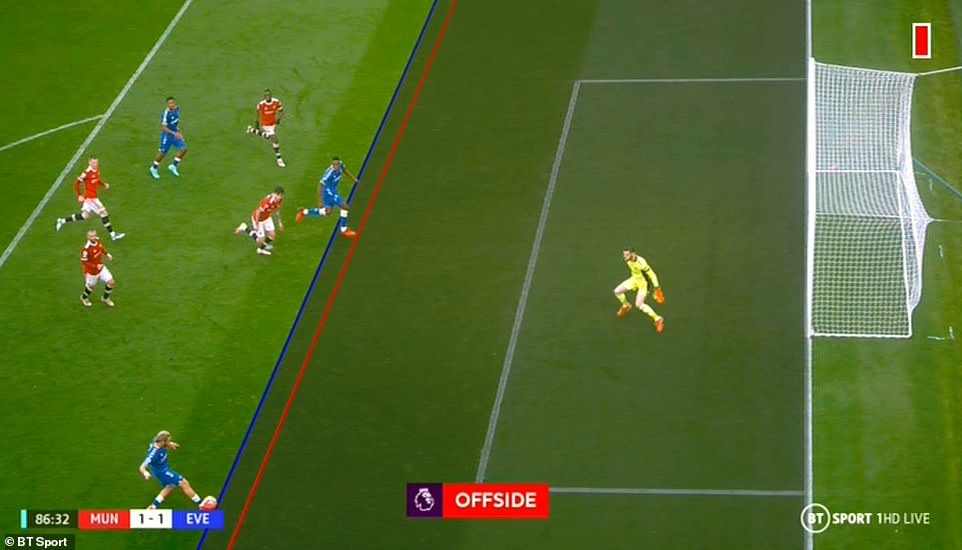 And yet prior to that, United were a team not just in search of a leader, with Cristiano Ronaldo on the bench, but in search of that brilliant moment. Everton were the team with a plan, with Abdoulaye Doucore breaking up midfield play, Demarai Gray linking in attack, Andros Townsend skipping past Luke Shaw in an afternoon-long duel.

United had the better chances it’s just they were few and far between. And inbetween, Everton were quietly accumulating a succession of chances on the basis that eventually it would come good.

If this were a boxing contest, one competitor was a skilful exponent of the craft busy accumulating points to impress the judges while the other was an instinctive talent relying a huge knock-out blow at some point. You can’t underestimate United. They are fearsome, especially if they can bring Ronaldo, Jadon Sancho and Paul Pogba off the bench as they did on Saturday, throwing on £100m players until they force the arc of their game their way.

Yet teams will always feel they have a chance against them, certainly a Rafa Benitez coach team. The warning signs were there when, though ruled offside, Salomon Rondon could get across United’s defence on 12 minutes and in the Michael Keane header just over on 17 minutes. 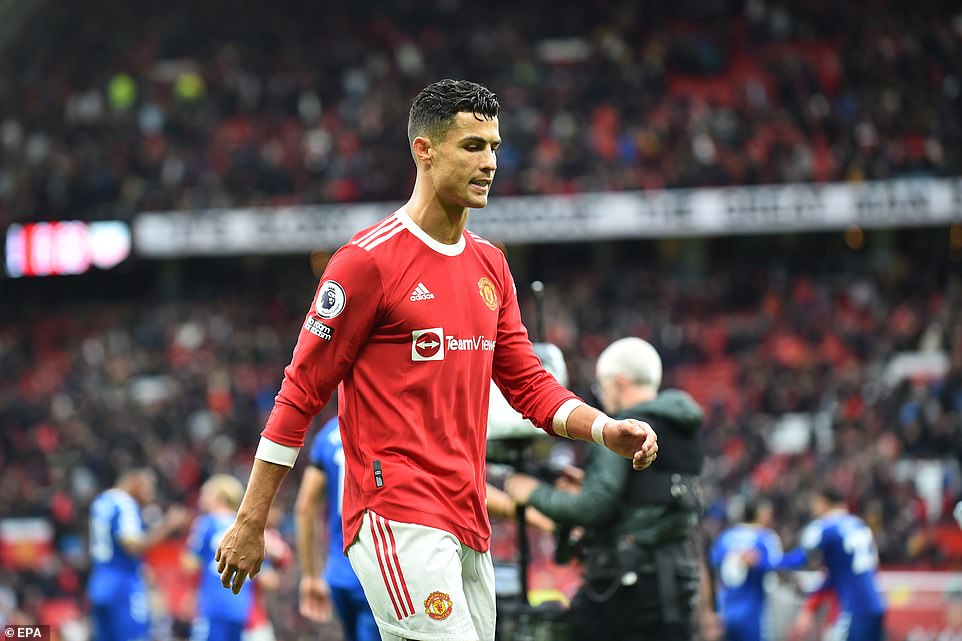 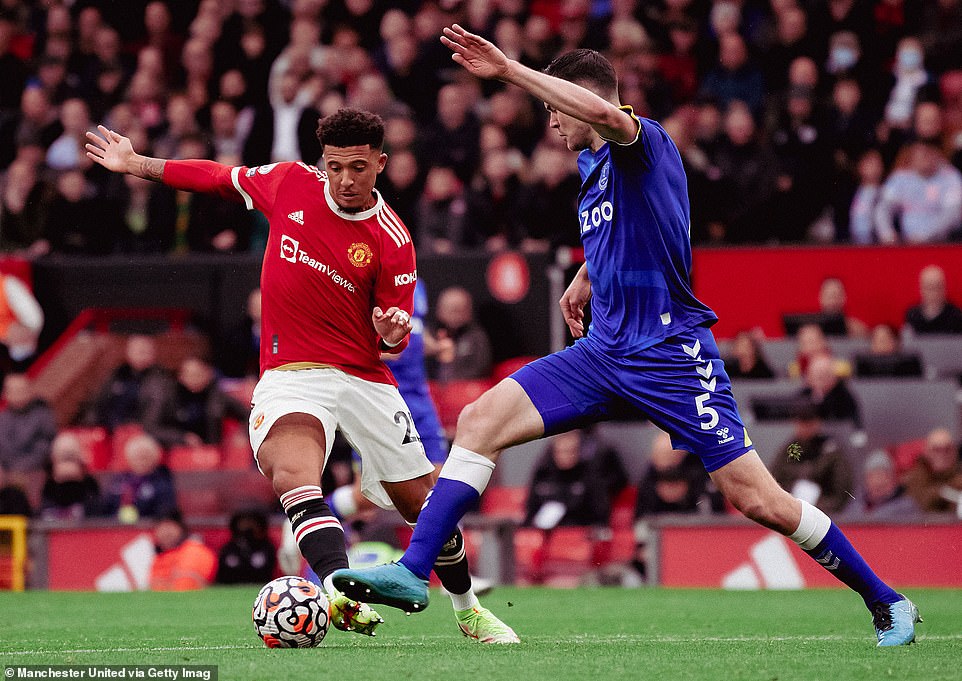 Or in Anthony’s Gordon’s incisive run down the right and cross, for which Townsend couldn’t quite get his feet coordinated in time to finish on 31 minutes and on Gray’s lovely run inside and shot, saved by David De Gea on 33 minutes. Despite the presence of two solid midfielders in Scott McTominay and Fred, United just look too open in those areas, conceding team too much space, to be happy with their performances.

How can it be that a team comprised of such brilliance can concede a goal when they are awarded a corner, as United did on 65 minutes. Fernandes’ corner didn’t even beat the first man. As it rebounded away, Gray, excellent throughout, chased it down and muscled Fred off the ball. In an instant, United are exposed, battled off the ball and insufficiently organised to prevent a counter.

Gray dashed away and Doucoure provided excellent support, though United weren’t helped by Luke Shaw going AWOL at left back and inexplicably getting drawn to the ball to leave Townsend unmarked. The final flourish was provided by the resurgent Townsend, finishing confidently past De Gea and then running to the corner flag to mimic a Ronaldo celebration, jumping and spinning in one movement to end with his back to the crowd.

It’s a goal no title challenging side should concede yet it’s a persistent flaw in United’s game. Everton exploited it all afternoon. Newcastle, despite losing 4-1 here, did so as well. It leaves United exposed to the necessity of heroics. 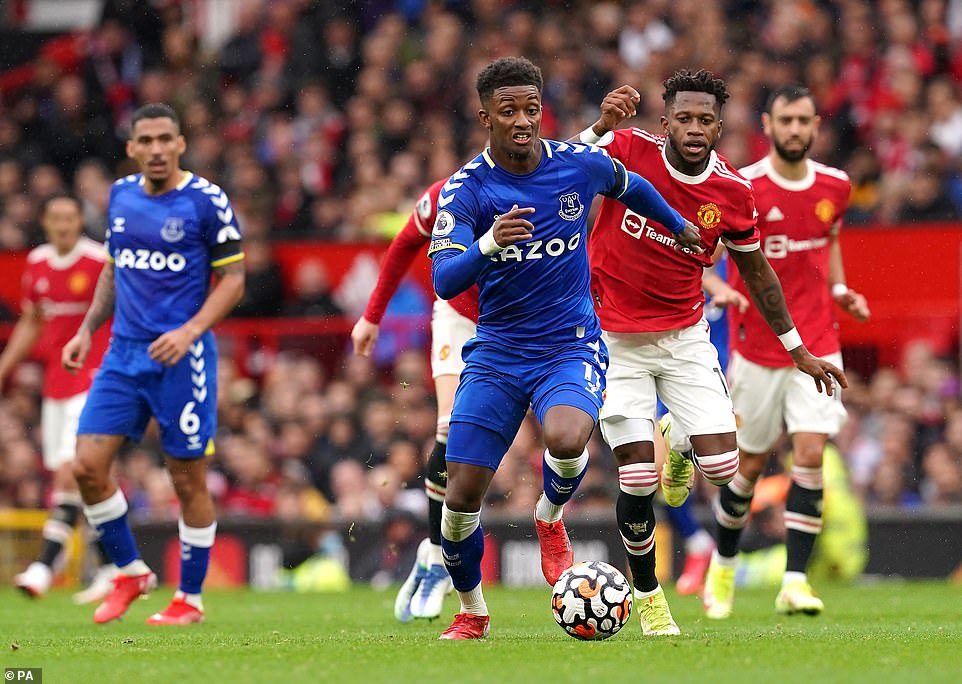 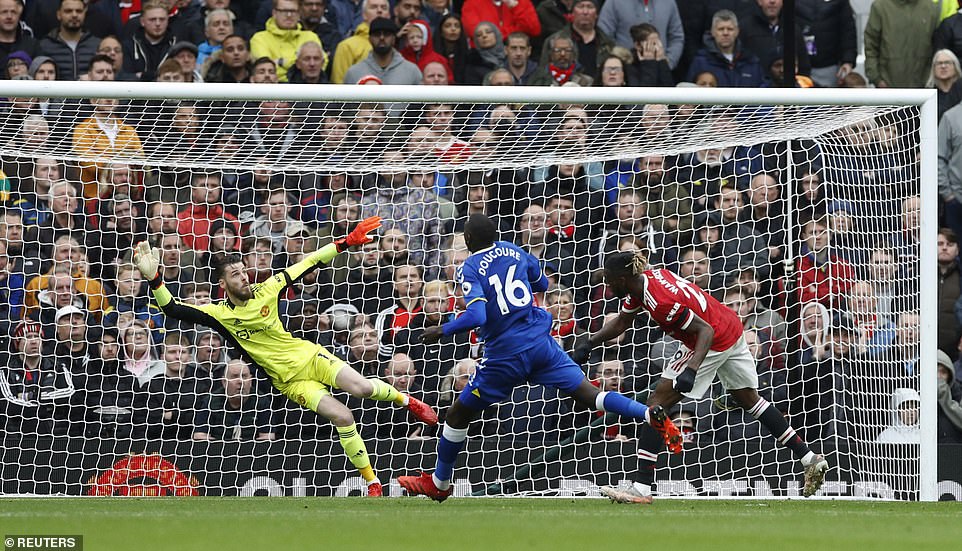 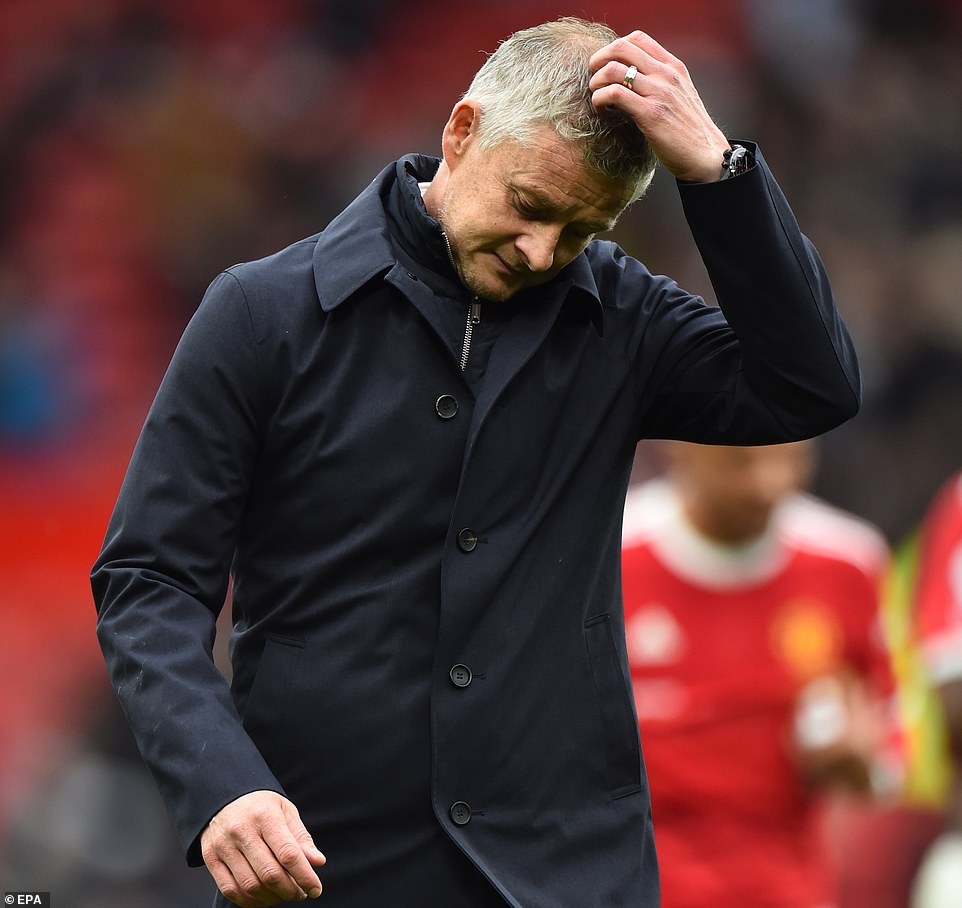 They might have snatched a late victory here, as they did against Real Villareal or at West Ham. But Pogba curled a shot just over the bar on 81 minutes and when Ronaldo offered the role of last-minute saviour to Sancho, back heeling the ball into his path, he failed his audition, drilling the ball into Jordan Pickford.

Equally though, they could have been recovering from a third defeat in four home games. Failing to clear a corner, Tom Davies found himself clean through on goal. He was primed to shoot but inexplicably chose to cross for Yerry Mina, who, though in a better position, was clearly offside.

The goal was initially given and Mina’s celebrations were exuberant. Yet they always seemed premature, so far had he drifted in front of Davies. Sure enough, VAR stepped in to save United. Without a grandstand finish from Ronaldo, a helping hand from Stockley Park was the best United could manage for dramatic finales.

RELIVE ALL THE ACTION WITH SPORTSMAIL BELOW