Real Madrid are fond of buying the Premier League’s best player. They signed the competition’s poster boy Gareth Bale in 2013 and captured Eden Hazard in 2019.

No one is playing better than Arsenal’s Norway midfielder and he is someone Madrid gift-wrapped for the Gunners in 2021, having reluctantly given up on the player they signed as a 16-year-old from Stromsgodset in 2015. 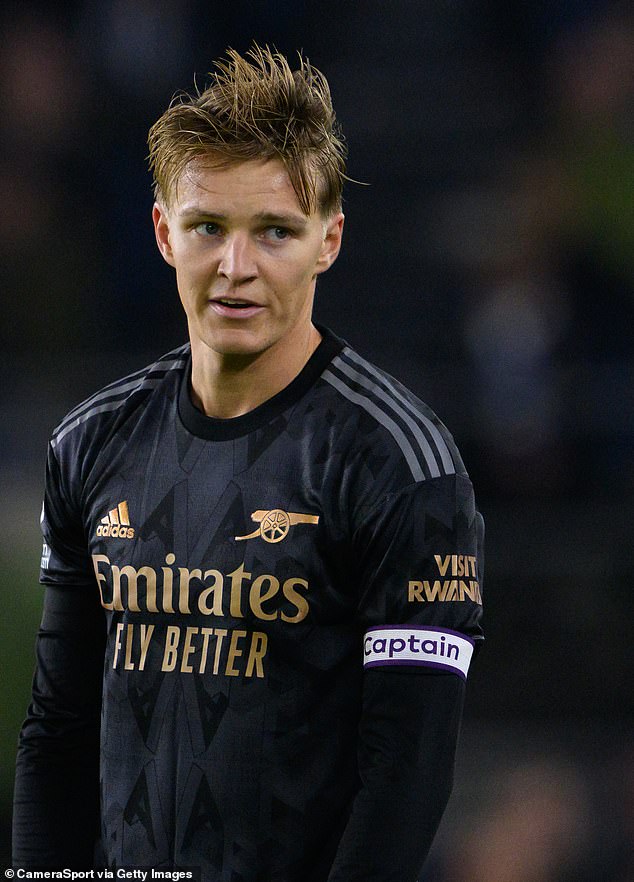 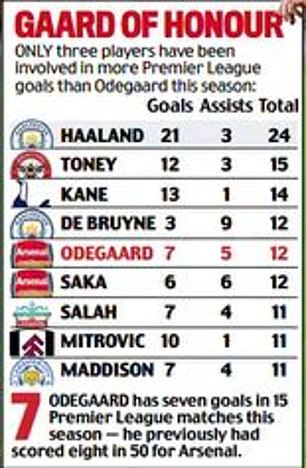 Arsenal manager Mikel Arteta said of his captain and joint top-scorer: ‘He has come from a very specific development process and now he is at a place where he is a very important player.’

He knows Odegaard, now 24, has had to mature as a player in circumstances that most youngsters are never exposed to.

Odegaard, who leads Arsenal into tonight’s meeting with third-placed Newcastle looking more than ever like the player Madrid believed he would become, was sent out in front of the flashbulbs at Real’s Valdebebas training ground for an ostentatious presentation eight years ago.

His father, Hans Erik, was given a role in the club’s youth academy and there were assurances about how quickly Martin would be fast-tracked to the first team. He would regularly join senior training sessions despite playing for the B team and was guaranteed a place on the pre-season tour. 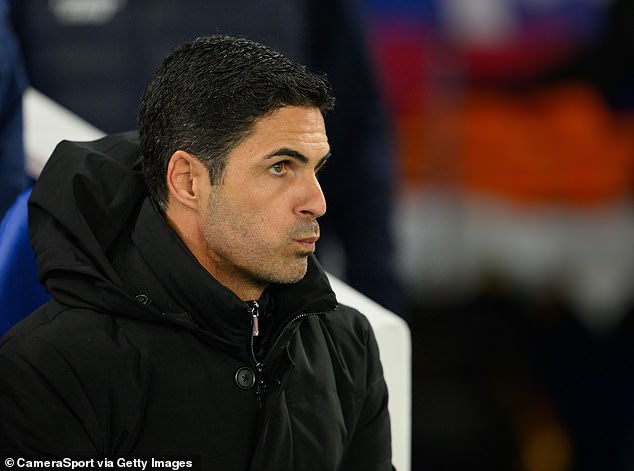 Such apparent benefits provoked scepticism and even resentment. Zinedine Zidane, who was B team coach, did not think much of the special treatment, especially as his son Enzo was in the same side playing in the same position.

And Carlo Ancelotti, who was persuaded to give Odegaard (below) his first-team debut so that he could become the club’s youngest player at 16 years and 157 days, would later call that a ‘public relations stunt’.

By 2020, Zidane was first-team coach and it was his reluctance to play Odegaard that pushed him toward a loan move to Arsenal in January 2021, which became permanent six months later. The sale was hailed as good business by Madrid — sold for £31million, a profit of £28.5m. 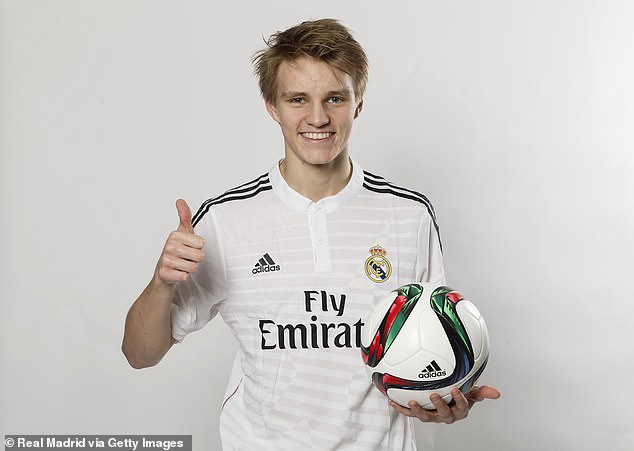 Real Madrid signed the Norwegian Odegaard as a 16-year-old, but lost him due to cash issues

But Madrid knew there was a risk involved. Odegaard had gone out on loan to Real Sociedad in the summer of 2019 and he had lit up La Liga with some stunning performances before a tendinitis problem in his right knee slowed him down. A native of San Sebastian, Arteta will have known how good Odegaard was for the city’s major club.

Odegaard’s displays suggested that there was so much more to come and, had Madrid not needed the funds at the time, then there might have been more patience.

But the Covid pandemic devastated Real Madrid’s finances to the point where sales were needed.

Selling veterans such as Bale and Marcelo was not possible because of their contracts, and so releasing youngsters who could command a fee was the only alternative. 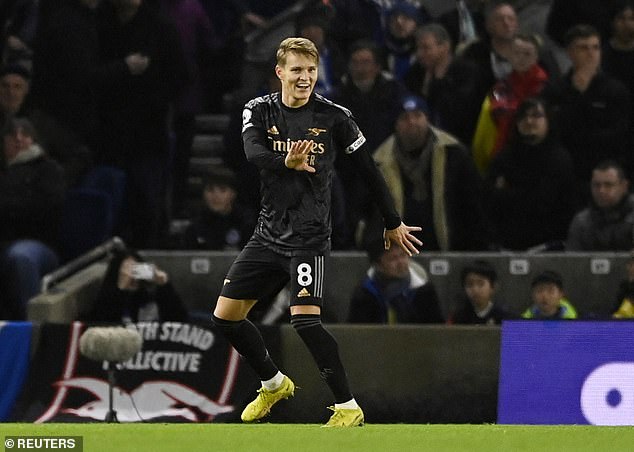 It is Arsenal who are benefitting from his magical plays, goals and assists during their season

Madrid also sold right back Achraf Hakimi to Inter Milan for £36m in the same period and he has since become Kylian Mbappe’s best pal at Paris Saint-Germain and a star for Morocco in the World Cup in Qatar.

Selling Odegaard still stings in Madrid. They have Aurelien Tchouameni and Fede Valverde to succeed Toni Kroos and Luka Modric in midfield and want Jude Bellingham this summer. But Odegaard represented a move away from the huge transfer fees.

He was the prototype of a policy to buy teenagers bound for greatness. Endrick, the 16-year-old Brazilian signed last month from Palmeiras for an initial fee of around £31m, is the latest, and Odegaard was the first.

Now it is Arsenal who are reaping the rewards and Arteta believes this is only the beginning. 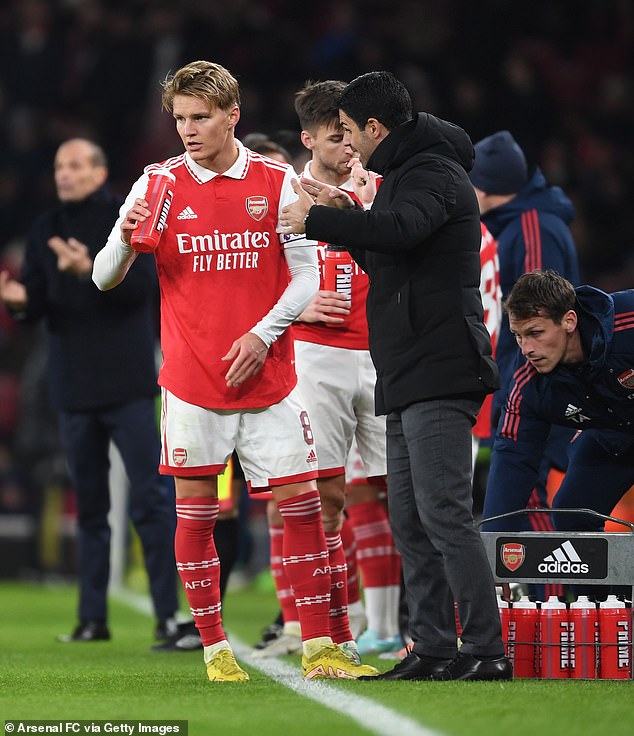 Arteta believes this is 'only the beginning' for his captain, suggesting he can improve his game

‘Physically he can still improve in many areas. The way he can drive with the ball and eliminate people, his crossing, his passing range, can still get better,’ he said.

‘His attitude, his willingness to learn and his application is always incredible. And when you have those ingredients normally good things happen.’

These good things have not gone unnoticed in Madrid. Arsenal’s 4-2 win at Brighton on Saturday was live on pay-per-view in Spain and the commentators hailed Odegaard’s penalty-box drag-back nutmeg as ‘play of the year’.

The praise kept coming as he scored Arsenal’s second and set up the fourth with a long pass for Gabriel Martinelli to score. The headline in Diario AS the next day summed things up: ‘Odegaard has the Premier League at his feet.’

'They should be relishing the place we're in and enjoying every second': Eddie Howe says third-place Newcastle shouldn't feel burdened by expectations as they travel to face high-flying Arsenal