Samuel Eto'o is filmed ATTACKING a man outside World Cup stadium after watching Brazil's win against South Korea... with Barcelona legend and current Cameroon FA president appearing to lose his temper before KNEEING cameraman in the face  Algerian YouTuber claims he was kneed in the chest by former Chelsea striker and Cameroon FA president Samuel Eto'o 'after asking if he had bribed a World Cup play-off referee' Brazil star Neymar appears to copy an outrageous Lionel Messi piece of skill by using the REFEREE to beat defenders in their World Cup thrashing of South Korea - in an echo of his PSG team-mate's brilliant improvisation while at Barcelona  Barça making renewed attempt to re-negotiate De Jong's contract Barcelona tracking Arsenal forward Gabriel Martinelli at World Cup

Most of Spain will switch the television off midday Central European Time on Monday.

Real Madrid apart, the draw for the Champions League last-16 does not involve Barcelona and Sevilla; and Atletico Madrid don't even need to switch back on for the Europa League draw.

Spanish radio Cope statistician Pedro Martin did the maths on the morning after the final night of the dismal group stage – in the 24 games played involving Spanish teams there had been eight wins, six draws and 10 defeats. 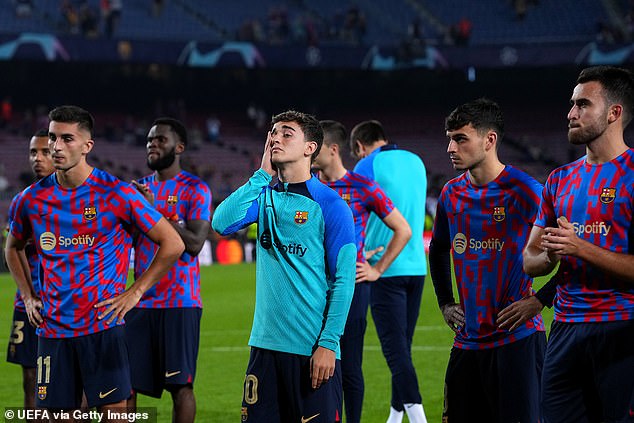 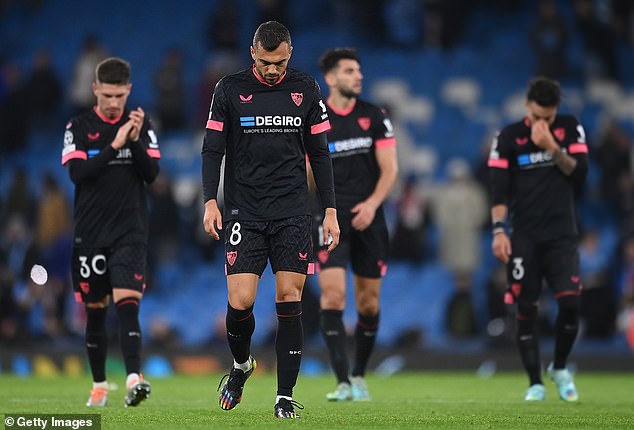 It was a similar story for Sevilla, who will have to make do with Europe's secondary competition

Not since the 2004 tournament have Spanish sides registered more losses than wins.

Three English teams topped their group while only one Spanish team managed it and the focus has been on the huge differences between the Premier League and Spanish football.

This isn't just about the financial catch-up that LaLiga is trying to play on English football – this is also about it being the end of an era at Sevilla and Atletico; and it still not quite being the start of a new one at Barcelona. 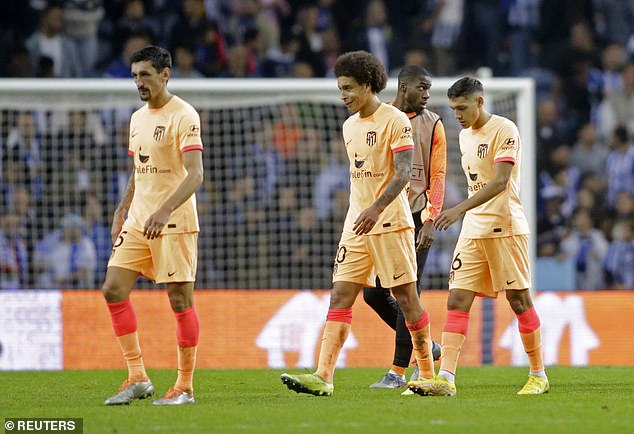 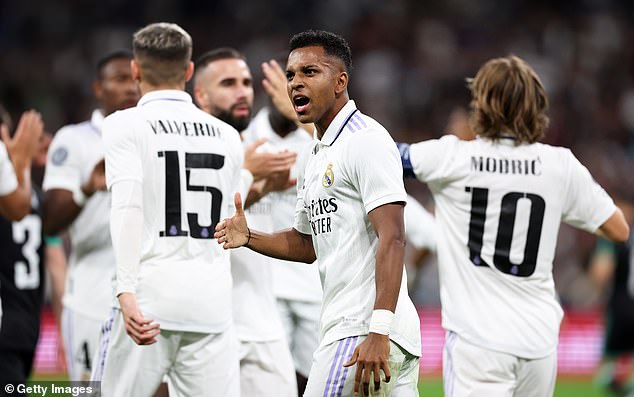 The team finishing bottom of the Premier League usually earns close to €100million (£87m) in television money. That's more than every club in LaLiga bar the big two and Atletico Madrid.

There are 48 million people in Spain and close to 68 million in the United Kingdom. It's a 20 million advantage that plays out in better pay-per-view numbers. 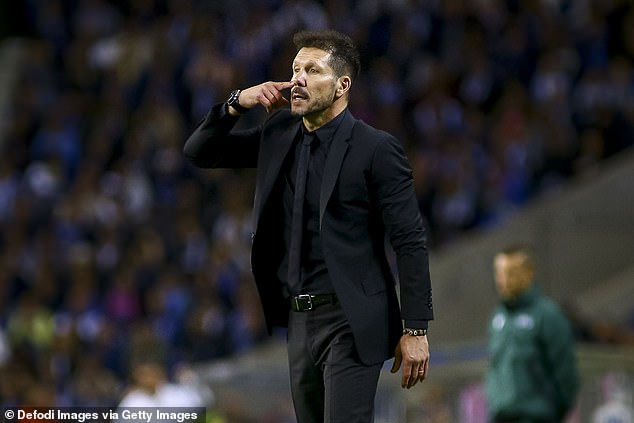 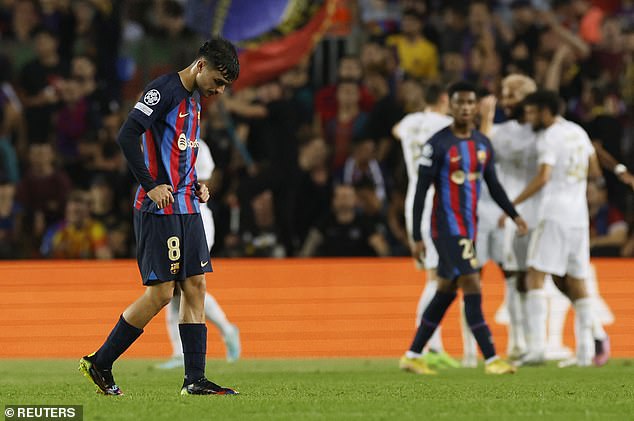 The hole in the theory that it's all about money is that Spanish clubs have won more European trophies over the last two decades than any other nation, in spite of that economic shortfall. So what has gone wrong now?

It's the end of an era at both Sevilla and Atletico Madrid, most dramatically at the latter.

Diego Simeone has a contract until 2024 and at €20m (£17.4m) net a season he will no more want to walk away from it than the club can afford to write it off. But the relationship between the board and the manager has never been more strained.

After the debacle of losing to Porto, Simeone wanted to turn all his attention on the league campaign and ensure that his fitness coach Oscar Ortega stayed at the club through November and December to work with the players.

But, as Spanish radio Cadena Ser reported on Wednesday, knowing that was their coach's desire, Atletico this week gave Ortega the OK to go to Qatar to work with Uruguay. 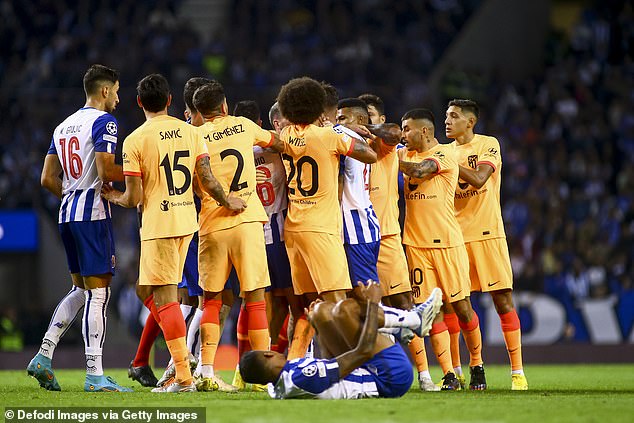 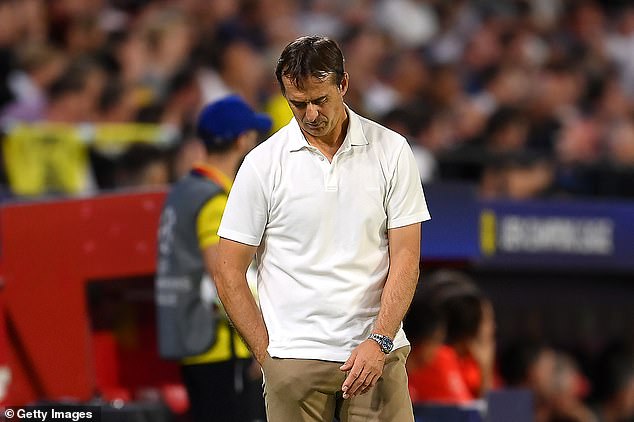 The more vocal supporters behind the goal have stopped singing his name; his relationship with the club's record signing Joao Felix has got worse over the years instead of better; and he feels short-changed by the club's failure to bring in a top-class central defender.

The Argentinian wants to stay and fight – hunt down Real Madrid, who are currently nine points clear, and win the Copa del Rey.

But in terms of turning them back into a European force either the club backs Simeone, and that might mean finding a new home for Felix, or they take a new direction with a new coach.

Sevilla have a new coach already but Jorge Sampaoli is stumbling over the same rocks in the road that tripped up Julen Lopetegui.

Monchi's magic has, for the moment, stopped working. His summer signings have failed to deliver and without money to go out and buy the best he is going to need time. 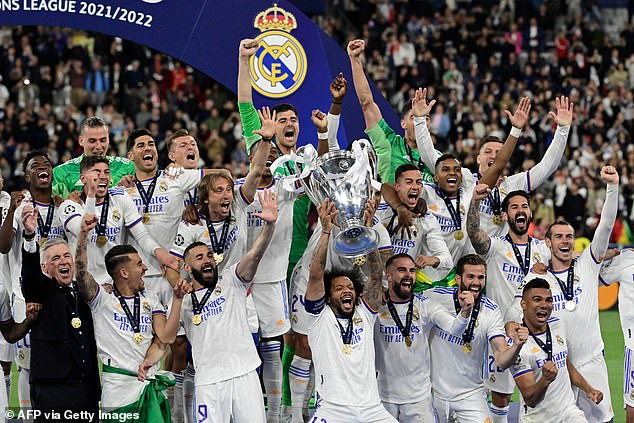 They are currently in the bottom three in LaLiga and they will almost certainly not be in the Champions League next season.

Barcelona are on a different point of the comeback curve. They rebuilt in the summer but have found out the hard way that throwing €150m (£131m) at a broken squad is not enough – especially when the draw throws you in with Bayern Munich and Inter Milan.

Next season they ought to be stronger with the likes of Ansu Fati, Gavi, Pedri, Jules Kounde and Alejandro Balde all a year older.

But as was proved this season it's a huge jump to go from not getting out of the group to reaching the latter stages of the tournament.

Optimists in Spain still think talk of the demise of its clubs can be silenced at the end of the season if Real Madrid win the Champions League and Barcelona or Real Sociedad or Betis win the Europa League, with one of those last two then helping push LaLiga's Champions League push next season.

It's not an unthinkable scenario - but for now only those supporting Carlo Ancelotti's Real Madrid will be tuning in on Monday for the last-16 shake-up.