Pep Guardiola always places great weight on the first two group games of the Champions League, whoever the opposition. Win them and the rest is relatively serene.

That attitude has served them well over his time, never failing to reach the last 16. The problems are saved for a little later in the competition.

So while this looked a breeze from fairly early on, Manchester City left nothing to chance, and maybe offered a glimpse at what Guardiola views as his best attacking cohort for the bigger matches moving forward. The trio worked. 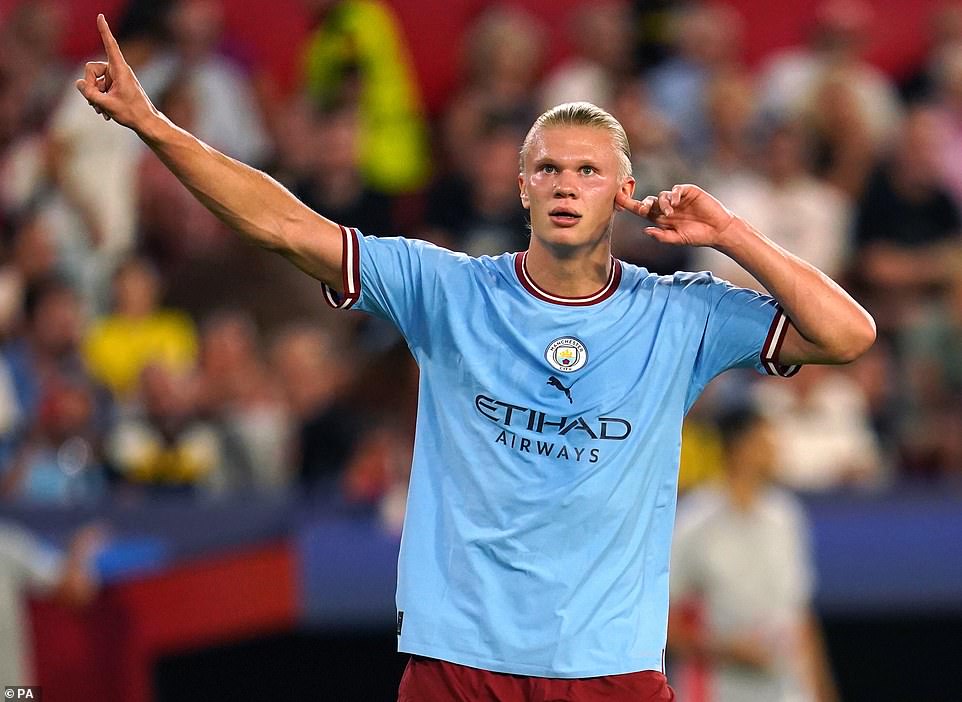 We will get to Erling Haaland. He scored another couple, obviously. The evening again belonged to him. But the two Englishman either side of him, Phil Foden and Jack Grealish, came away with significant credit too.

Both were exceptional as inverted wingers, ably backed by the traditional full backs in tow. City - who took all the heat out of an area affectionately known as the frying pan of Spain – were more symmetrical. Smoother, if that is possible.

Guardiola admitted after the draw at Aston Villa over the weekend that they had missed Grealish and evidence came of that when beating Sevilla. More control in possession, for starters – crucial when encounters such as this stay tight for far longer than they should.

Enter Haaland. The sky might fall in when he eventually leaves a pitch without at least one to his name. Two more for the collection – now 12 in seven games for City – that takes him to 25 in the Champions League. 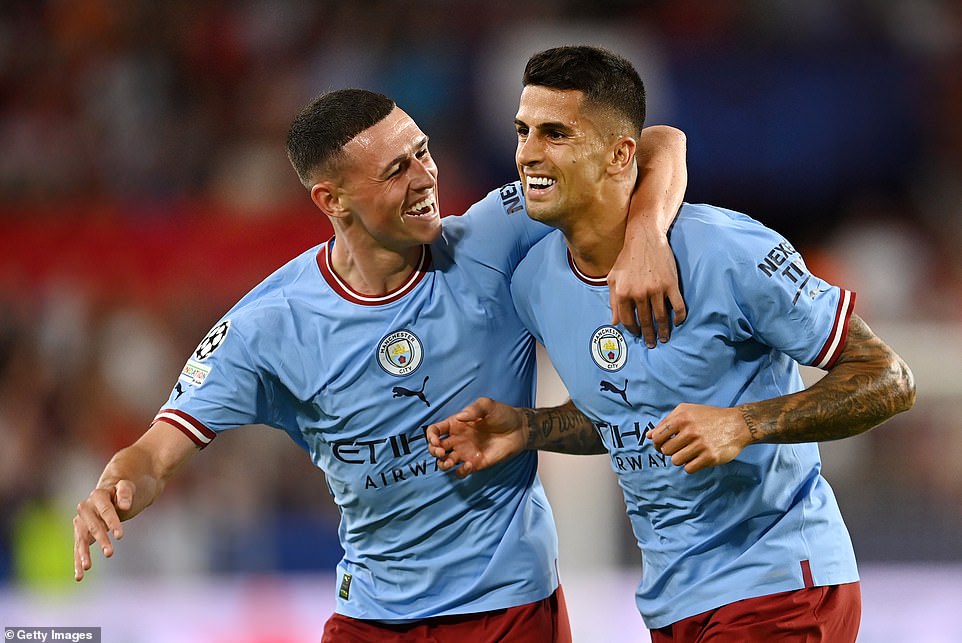 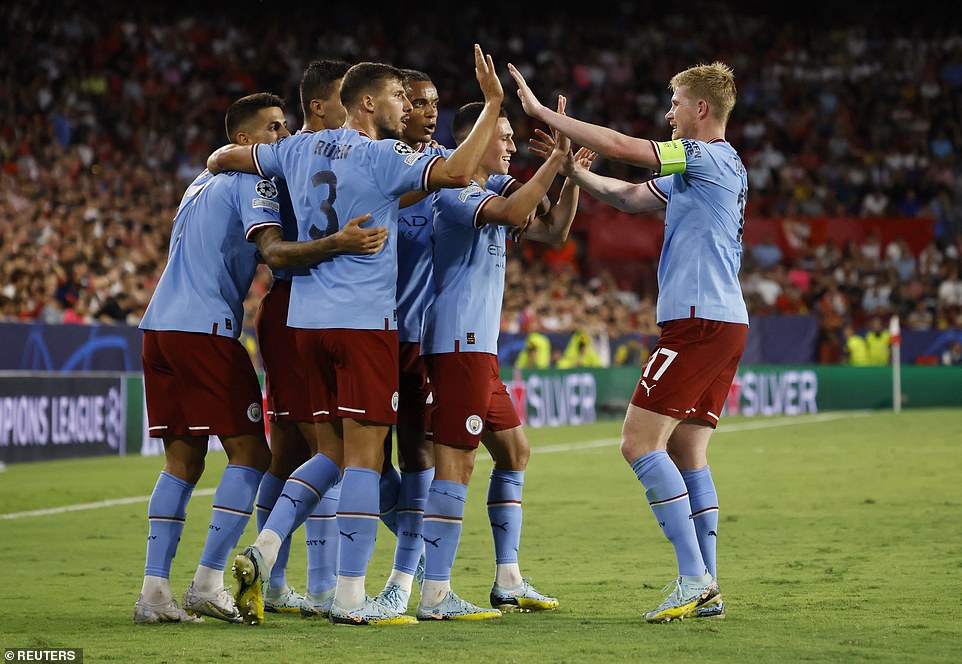 Those have come in 20 appearances. Nobody – not record holder Cristiano Ronaldo, not Lionel Messi – has ever posted those numbers. No wonder the local newspapers carried headlines “El Coco” – loosely translated to The Bogeyman – and “a monster is coming to see you”.

Guardiola spoke glowingly of Sevilla on the eve of this, saying that he would ‘love’ to have their history in European competition given the four Europa League trophies in the locker since 2014. City’s only piece of silverware on the continent came 52 years ago, the Cup Winners’ Cup, although their progression in the premier club competition over the Catalan’s tenure has been encouraging.

Despite their pedigree, Sevilla’s start to this season has been less than impressive – three defeats and a draw leaving them in La Liga’s relegation zone and Julen Lopetegui fearing for his long-term prospects. 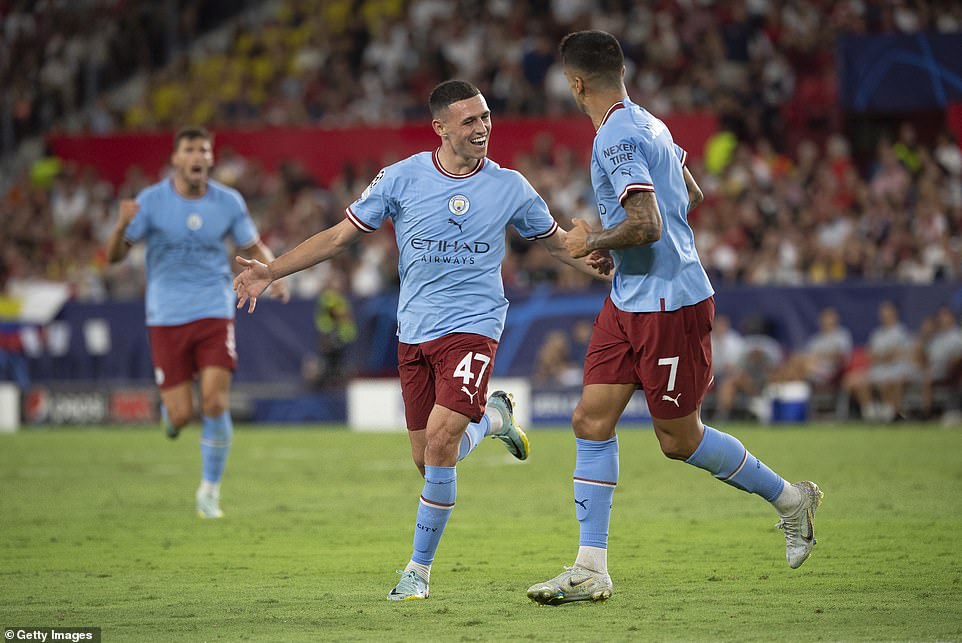 Devoid of confidence, they were never really going to aggressively press City in quite the way that their team bus did earlier in the night – arriving right outside the atmospheric Ramon Sanchez-Pizjuan Stadium seconds after their visitors. Some of Guardiola’s squad had not even clambered off the coach by the time Sevilla disembarked, the gathering crowds unsure whether to cheer or jeer. In the end, they did neither with great gusto.

Inside it was a bit different. This old place rocks like few others, hostile with bite after the passionate rendition of the club’s anthemic hymn. Sevilla were lifted for it, briefly forcing City full debutants Manuel Akanji and Sergio Gomez into difficult areas, but left praying for some form of mercy on the 20th minute. By the time of the opener, this already resembled attack versus defence. Following a real schooling, Lopetegui’s team endured a piercing din and handkerchiefs at full time.

Haaland happened again and the scary thing about his first this was the telepathy struck up so quickly with Kevin De Bruyne. The Belgian ran on to Foden’s delicate, perfectly weighted pass beyond the defence, took one glance across the six-yard box and there arrived a diving limb, Haaland’s left leg. The goal was so simplistic yet almost impossible to stop, so easy yet so clever. 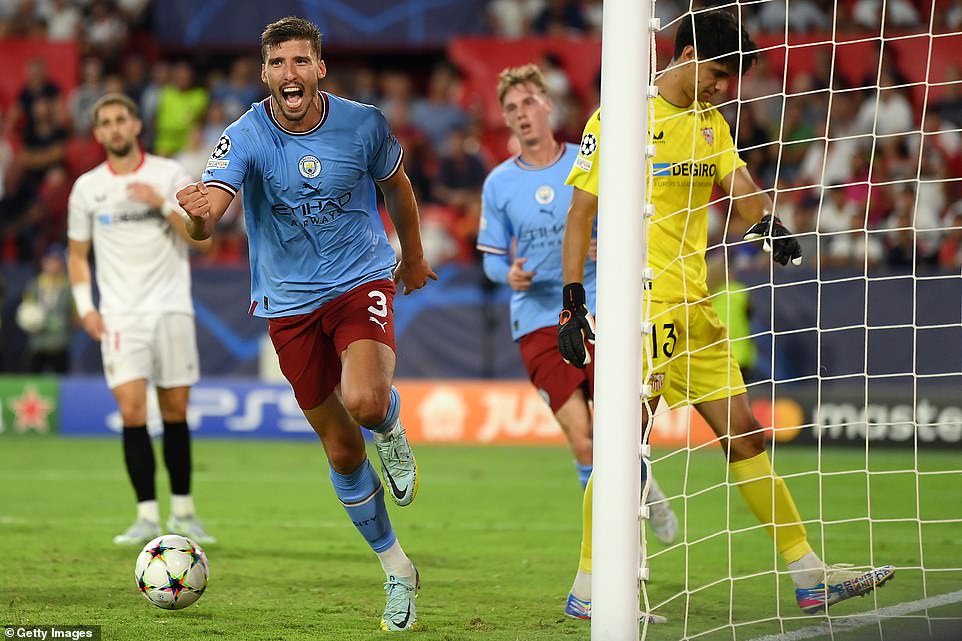 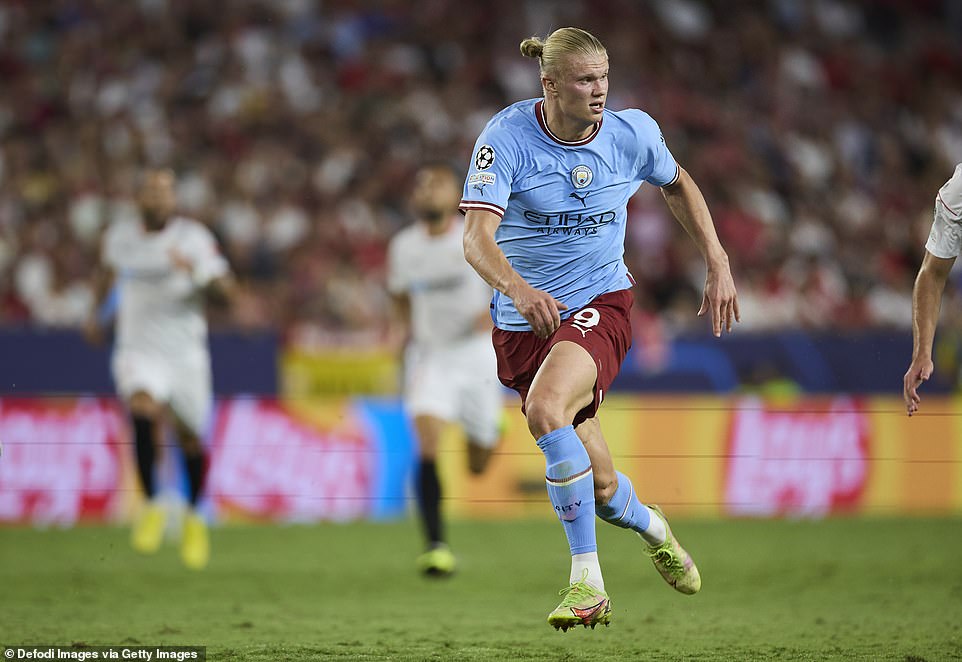 Foden had earlier appealed for a penalty when barged away by Marcos Acuna, while Haaland flicked another De Bruyne cross wide. If Guardiola had any complaints, it was that they were not leading by more, because Sevilla had retreated to such an extent that retaining the ball in any sort of dangerous area was proving too much to ask. Their best opportunity came when Alejandro Gomez sliced Isco’s knockdown wide.

It mattered little but De Bruyne was guilty of missing a huge chance when set free by Haaland as the pair picked Sevilla’s pocket and broke at pace. De Bruyne bore down on Yassine Bounou, ready to slide into the corner, only for the goalkeeper to fling himself at the finish.

The tie was done a couple of minutes before the hour, though. Just as patient as with the first, Foden collected Joao Cancelo’s centre and twisted until the right moment about 15 yards out. Giving Bounou the eyes, Foden skewed into the far corner.

A third for good measure, another for Haaland – mopping up when Bounou saved Foden’s drive. A tap-in merchant, this guy. And then Ruben Dias had one of his own in stoppage time, adding gloss when meeting Cancelo’s cross.

Ajax 4-0 Rangers: Scottish side crumble to a humbling defeat on their Champions League return... as the Dutch side prove they are just fine without their summer departures with a resounding win