Trent Alexander-Arnold is one of Liverpool's biggest attacking threats but also their weakness, says Michael Owen, as ex-Red Ryan Kent looks to capitalise for Rangers in 'Battle of Britain' Champions League clash    Richard Keys vows to take legal action against Gabby Logan over claims in her book that he and Andy Gray are 'cruel dinosaurs' who joked about refusing to have sex with pregnant women, while she was expecting twins

DOMINIC KING: Darwin Nunez looks like Jurgen Klopp's odd man out... he was yet again reduced to a bit-part role in the win over Ajax but Liverpool's £85m signing is not disheartened as he continues to settle into life on Merseyside

The man who had arrived with hopes and dreams of becoming a hero cut an interesting figure on Liverpool’s most significant night of the season.

Champions League matches at Anfield offer a platform for signings to propel themselves into this stadium’s affections. These occasions matter and have the ability to enhance reputations significantly, as Darwin Nunez would know.

It was here in April, when Benfica were pursuing a hopeless cause in the quarter-finals, that the Uruguayan looked like he would find a way through Liverpool’s defence whenever he so desired, scoring once in a 3-3 draw and having a couple of others ruled out for offside. 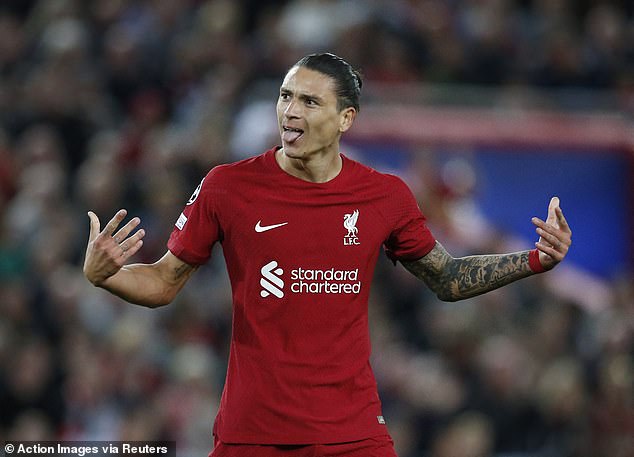 Liverpool boss Jurgen Klopp was so impressed with what he saw that evening — not to mention during the first leg in Lisbon — that his side invested £85million in the summer for him to be the new focal point of their team. When you read that back, you would assume his starting place was guaranteed.

Not so. As in Naples last week, Klopp chose to leave Nunez among his substitutes, despite making four changes following a performance he colourfully — and rightfully — described as being ‘a horror show’. Such decisions speak volumes about situations.

So as Mohamed Salah, Diogo Jota and Luis Diaz combined, Nunez took his place on a seat behind Klopp, often staring blankly out at the pitch as the action unfolded in front of him. At half-time, meanwhile, he took part in rondos with James Milner, Joe Gomez and Fabio Carvalho. 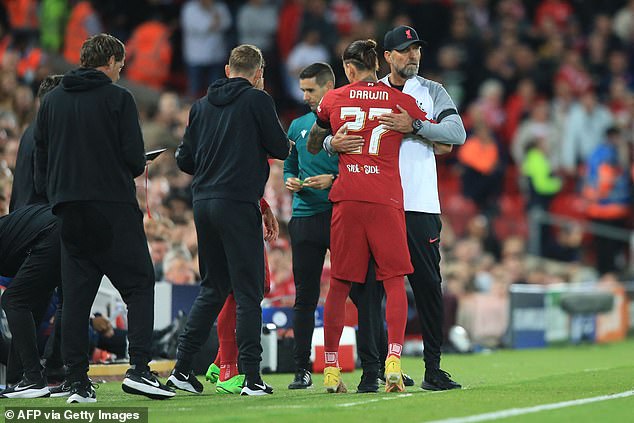 Klopp eventually ushered Nunez into the action on the hour mark, and he looked enthusiastic

This is not making a snap judgment or suggesting that Liverpool have bought a dud in Nunez. The quality of clubs who wanted to take him from Benfica this summer and who tried in January tells you he is a young man with talent and, in flashes, he has shown it in red.

But the very fact Klopp has used Nunez in bit-part roles, as Liverpool set off on a road they hope will lead them back to Istanbul next June, tells you that his acclimatisation is taking longer than some would have anticipated.

Perhaps the early cameos against Manchester City in the Community Shield, when he won a penalty and then scored the decisive third goal in a 3-1 victory, and against Fulham, when he scored again and set up another for Salah have not been particularly helpful.

After the City triumph, the narrative became who would score more — Nunez or Erling Haaland — but the Norwegian’s staggeringly smooth transition has made this a non-contest. How can it be when he is only fleetingly on the pitch?

Klopp eventually ushered Nunez into the action on the hour here, sending him on his way with a hug and a slap on the back. He was enthusiastic and the way in which he charged towards the action made you wonder if he was too hyped up. 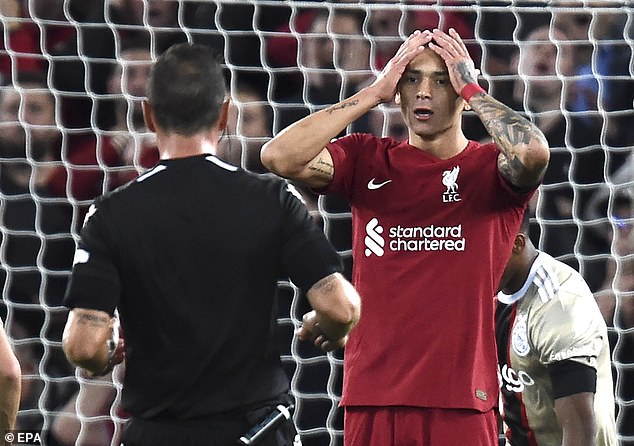 Quickly, he got involved in the game and there was a moment when he could have made himself a hero, in the 82nd minute, when the ball sat up for him in front of The Kop but his finish was hurried and he dragged his shot wide of Remko Pasveer, Ajax’s goalkeeper.

Another opening came in the next attack, when he bulldozed his way to the byline and fizzed a cross into the six-yard box that evaded everyone. Still, he would not be disheartened and Nunez enjoyed geeing the supporters up.

He will only be truly happy, though, when the goals start flying in.