You would hope those Liverpool fans who followed Jurgen Klopp's advice in May, to 'book your hotels' in Istanbul for the 2023 Champions League final, secured refundable rates.

In the moments after the defeat to Real Madrid in Paris, an emotional Klopp pledged to oversee Liverpool's return to the biggest club game in the world within 12 months and urged despondent supporters to follow his dream.

On this evidence, Liverpool will be lucky to reach the knockout stages in 2023. The tournament that has often been such a wonderful diversion from domestic matters could not have started in a worse possible fashion for Klopp and his players here in Naples. 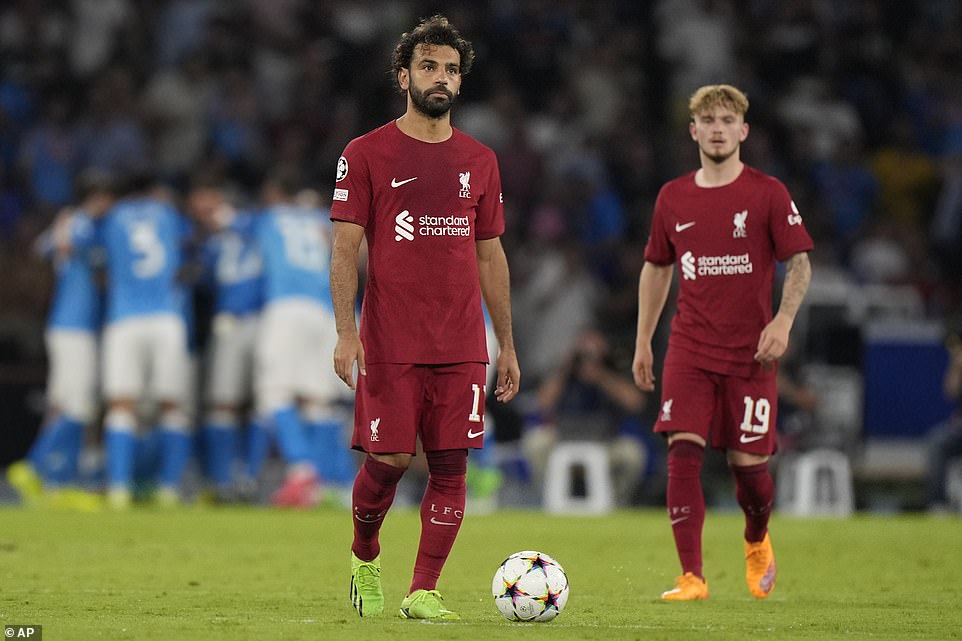 Liverpool endured an embarrassing start to their Champions League campaign, suffering a 4-1 away defeat to Napoli in Italy 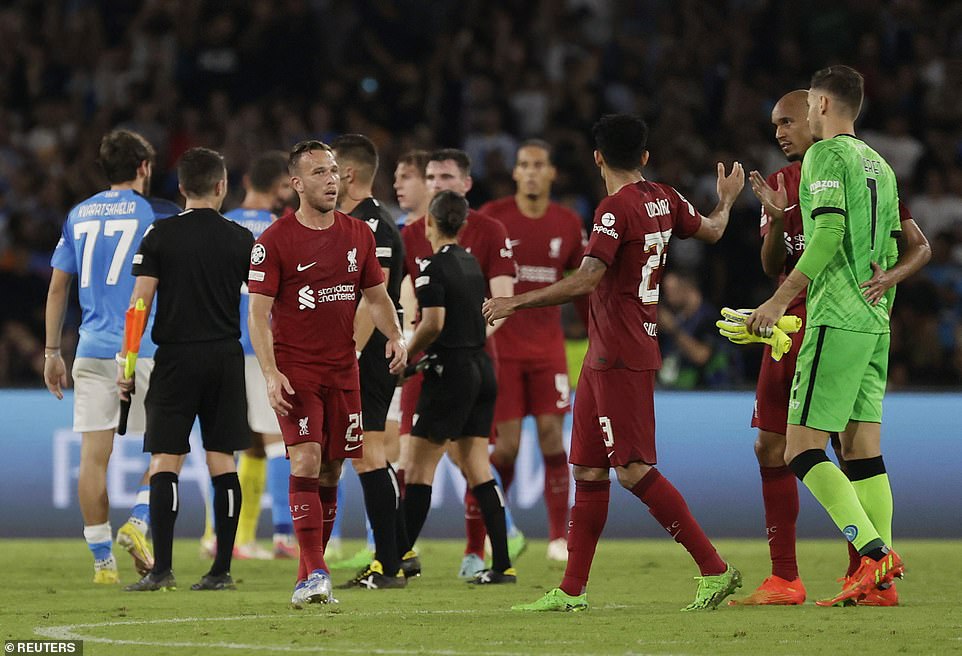 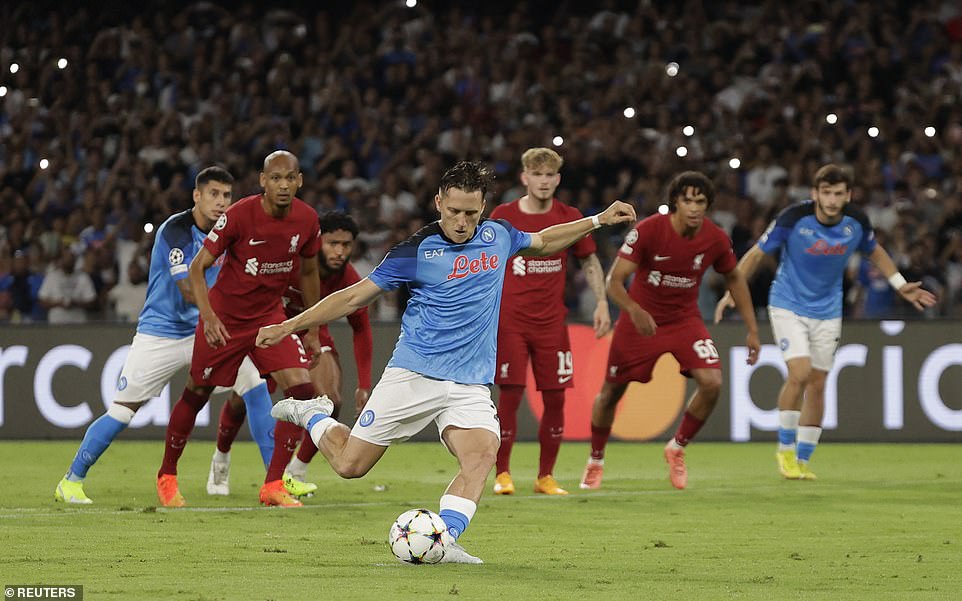 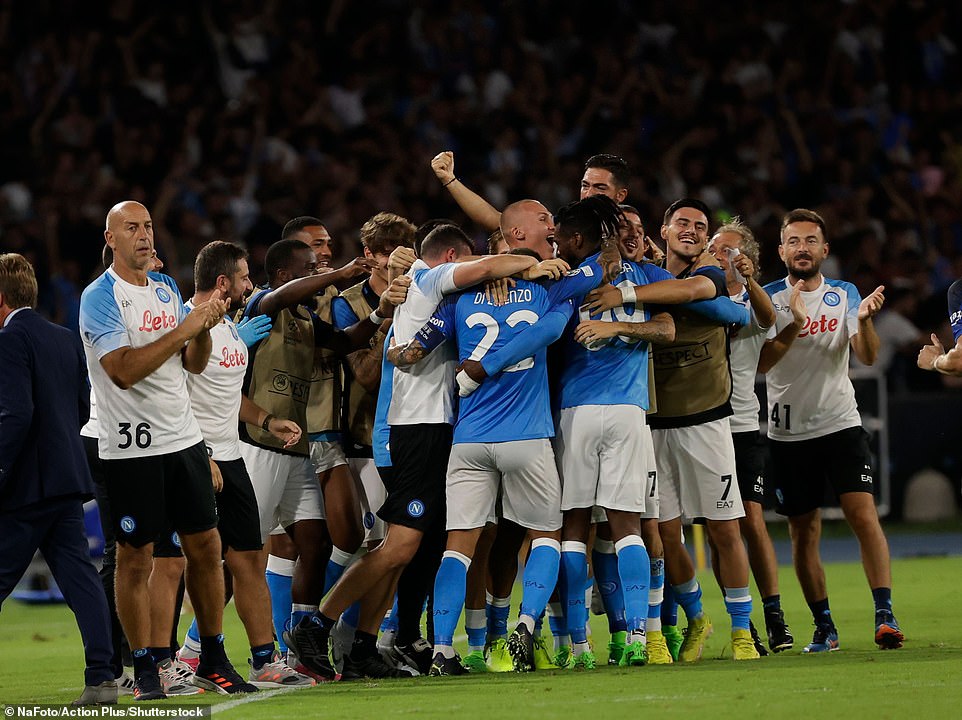 This, frankly, was an embarrassment, a display so wretched that it made it easy to label it as the worst European performance of the Klopp era. All credit to Napoli, who were young, aggressive and dynamic, for wreaking such havoc but Liverpool, recklessly, assisted them.

Three goals down at half-time – an Alisson Becker penalty save stopped the scoreline being even more emphatic – it was scarcely believable only 103 days have passed since Liverpool were going head-to-head with Madrid, looking to conquer Europe for a seventh time.

How the issues are mounting for Klopp, who bore the dumbfounded look of a man who had just seen his house collapse in front of him. The shock, undoubtedly, was exacerbated by the fact he saw Napoli doing everything he expected Liverpool to do.

What he wanted and what he got were two different things entirely. Liverpool were a shambles and the manner in which they were carved open, time and time again, was an affront to the values this team prides itself upon.

It was apparent within 42 seconds that Liverpool were there to be taken apart. Napoli had seven players on the halfway line at kick-off, waiting to burst forward, but it was a decoy. They went backwards to launch their attack and pulled those in Red out of position. 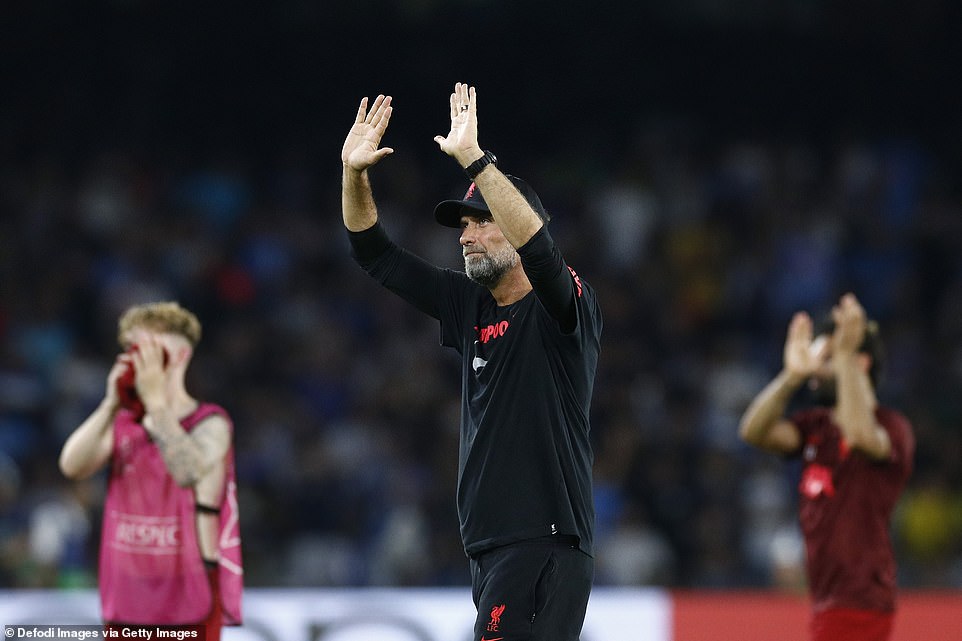 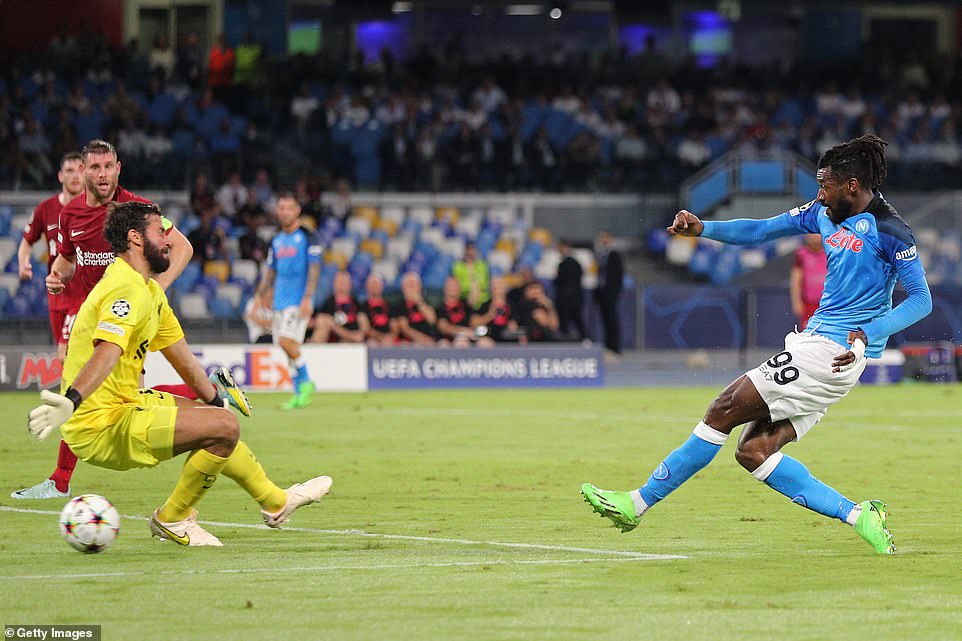 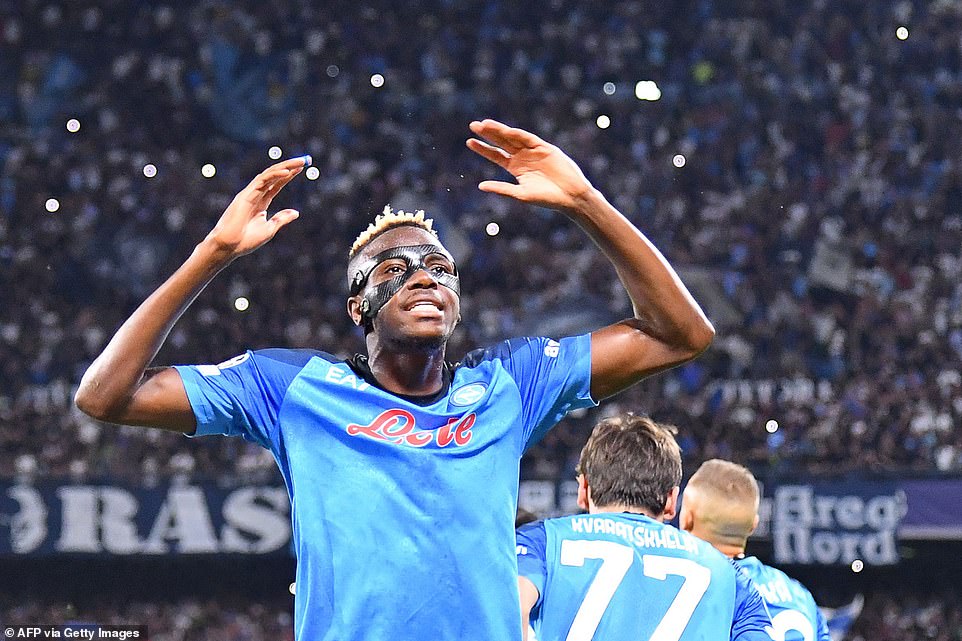 The move ended with Victor Osimhen, the Nigeria international, skipping around Alisson, who had dashed out of his area, but, agonisingly, his shot cracked against the side of the post. This jolt should have woken Liverpool up but, instead, they froze.

Within four minutes, they were behind. Piotr Zielinski, a player whom Klopp tried to buy for Liverpool in 2016, broke into the area and shot but his effort was stopped by James Milner's hand; referee Carlos del Cerro Grande had no hesitation in pointing to the spot and Zielinski duly converted.

Games in this stadium have always given Liverpool headaches but this was the first time they had conceded here so early. Sensing the opportunity that something special might happen, the locals created a noise like thunder and watched Napoli play with the electricity of lightening.

Joe Gomez was the man whom Klopp would hold accountable at half-time, taking the central defender off, but this was not about the efforts of one man. Trent Alexander-Arnold was lamentable, Virgil van Dijk was so horribly out of sorts, Fabinho was wooden, Milner so off the pace. 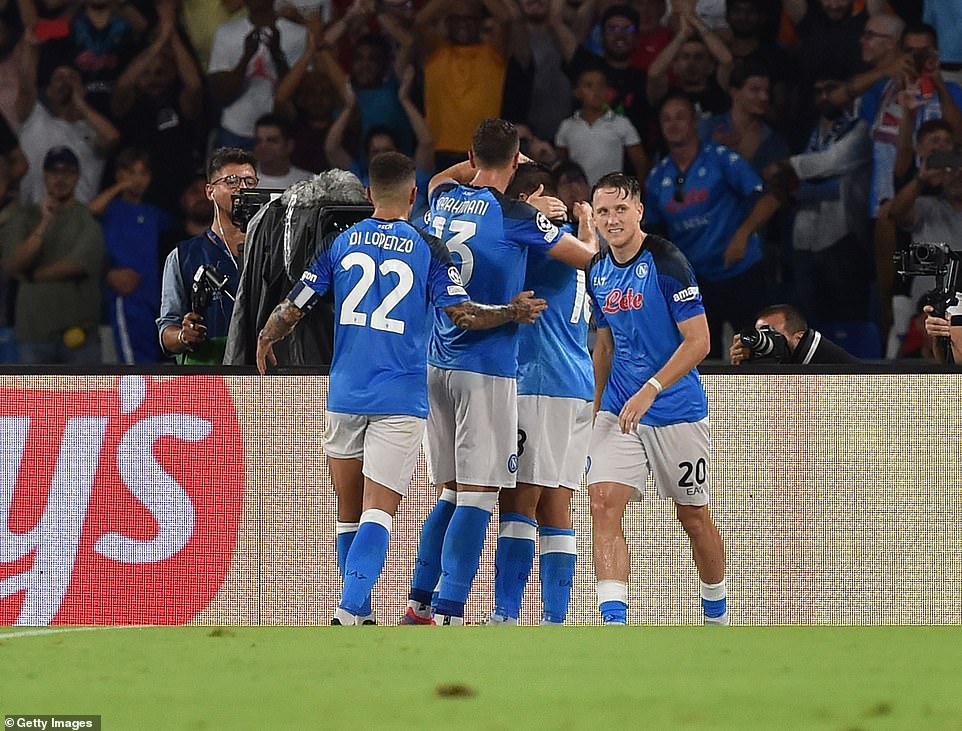 Each time Napoli scuttled into dangerous areas, it felt as though they would score. Osimhen, with his changes of gear and enthusiasm, tormented Van Dijk and company he should have had a goal of his own in the 18th minute after he had been tripped by the Dutchman.

VAR advised Del Cerro Grande to look at the pitchside monitor and he was sufficiently convinced to award another spot-kick but Osimhen could not convert, as Alisson plunged to his right to beat away a spot kick that lacked genuine conviction.

Any fears Napoli would be left to rue that miss were swiftly dispelled. Van Dijk had already cleared a shot off the line from Kvicha Kvaratskhelia, the Georgian prodigy who is winning such rave reviews, before the 21-year-old created the second.

They have started calling him 'Karadona' – in these parts, compliments do not come any higher – and his surge in the 31st minute presented Andre-Frank Zambo Anguissa, once of Fulham, to beat Alisson at his near post.

Quickly two would become three as Kvaratskhelia, waltzed through non-existent challenges to provide a ball that gave Giovanni Simeone, son of Atletico Madrid manager Diego, the easiest opportunity to score for Napoli for the first time. Cue Bedlam. 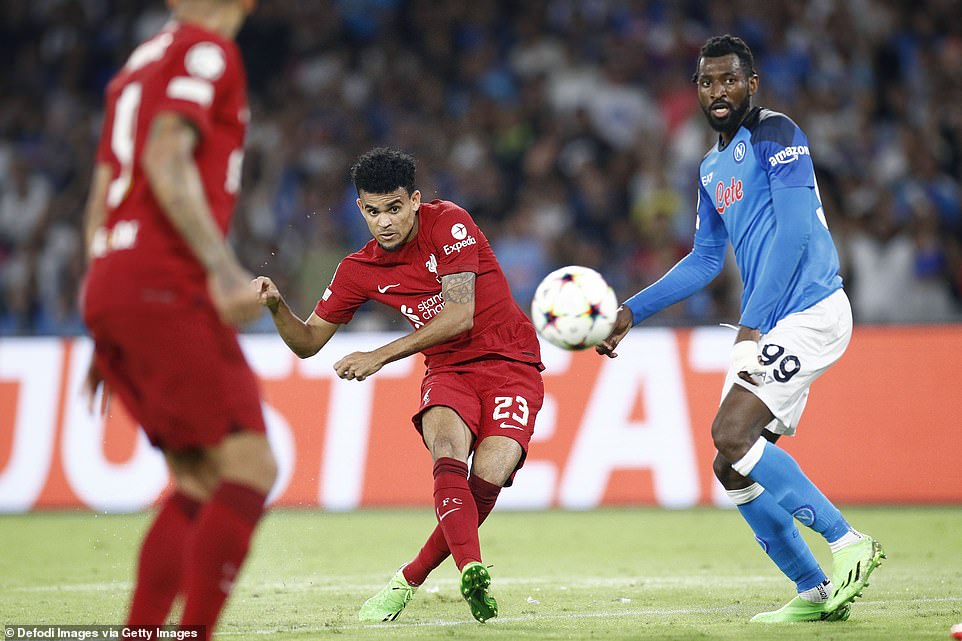 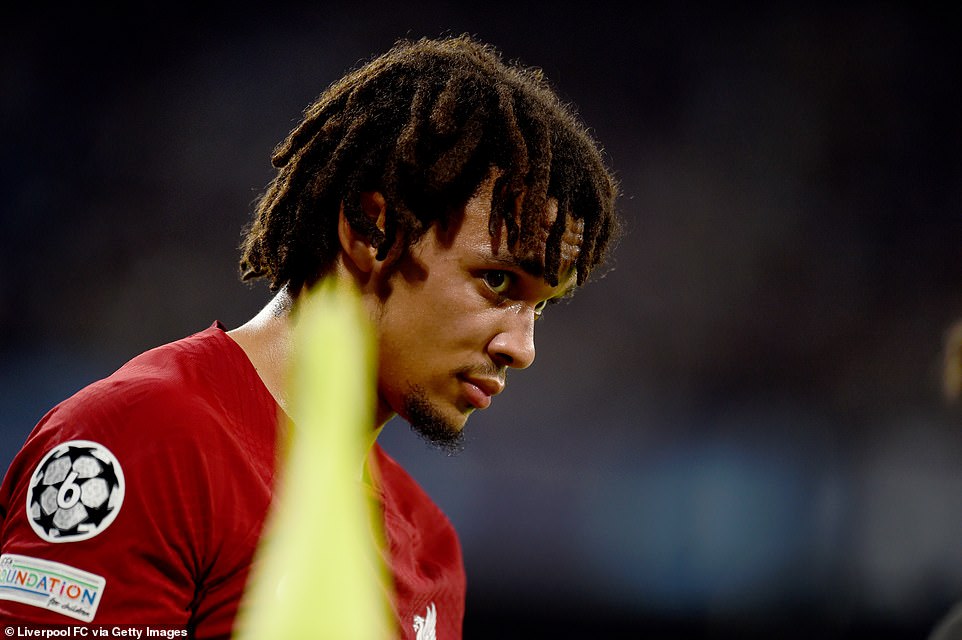 Here was where you could see how deep Liverpool's issues are: there was finger-jabbing, shouting and arms raised in exasperation, the tell-tale signs of team that is malfunctioning. Klopp ran to the dressing room to see if he could summon a response but none was coming.

Did anything he say during that 15 minutes make a difference? Clearly not. Joel Matip replaced Gomez but, in the 48th minute, another counter enabled Zielinski to plunder his second and Napoli's fourth and have historians searching for comparable misery.

This, numerically, was Liverpool's worst European night since Ajax thrashed Bill Shankly' side in the late 1960s 5-1 but the impoverished nature of it all had you thinking back to the 1990s when they were as effective on the continent as a domestic plug.

Luis Diaz, at least, scored a consolation but it brought no joy. At the end, Klopp walked over to the visiting fans and made a gesture, hands clasped together, that is universally recognised as an apology. It was appropriate way to end a sorry evening. Istanbul has never felt so far away.

Relive all the match action throughout the clash on Sportsmail's live blog below, written by Ben Willcocks.