This is a night that Napoli fans will remember forever; a magical night in which Liverpool were trampled all over, casting serious doubts on the ambitions of Jurgen Klopp's team this season.

In Naples today there is talk of nothing else. News stands display the club's badge and newspaper front pages are dominated in celebration of a heroic display.

Enthusiasm is high. Everyone in the city is talking about Luciano Spalletti and his players and the pride they felt as they reminisce while sipping a morning coffee.

There is talk of this historic victory everywhere: at the coffee bar, at the bank, at the supermarket and among cars stopped at traffic lights.

There were fireworks set off and horns blaring on the roads at full-time - it was as if Napoli had won much more than a group-opening Champions League match.

Napoli threatened to be - and turned out to be - Liverpool's worst nightmare. 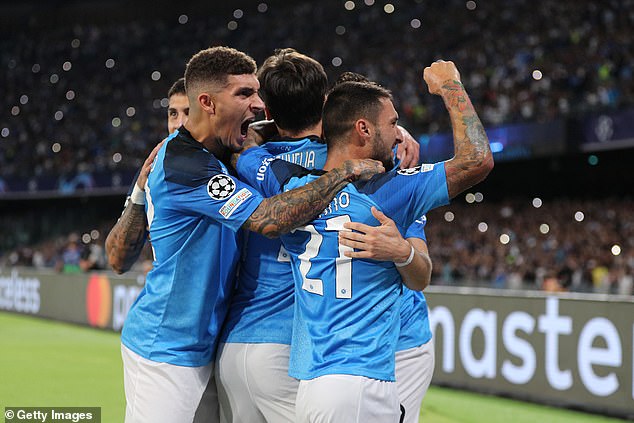 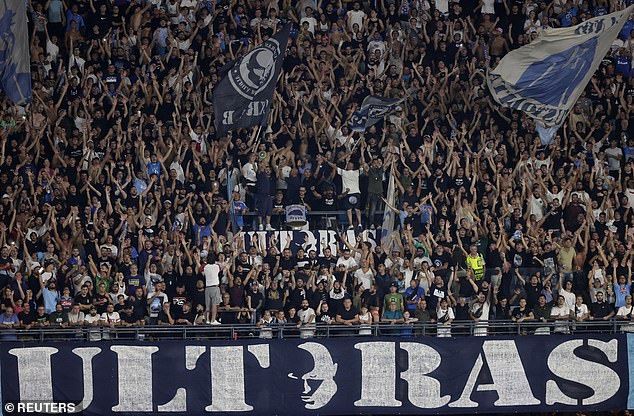 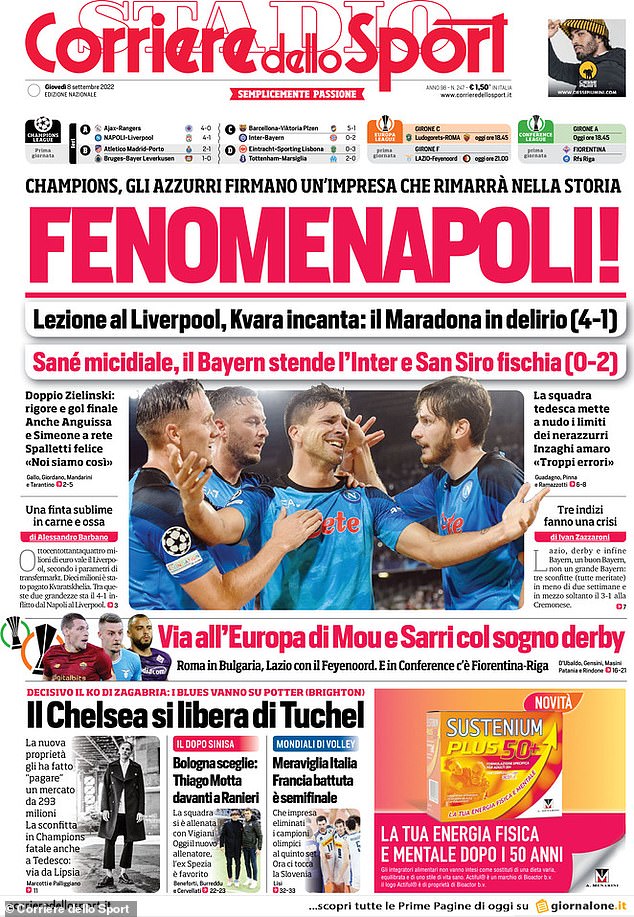 Liverpool lost in Naples in 2018-19 and again in 2019-20, but this third defeat created an emotional earthquake that will never be forgotten.

A bit like in the biblical story of David and Goliath, this victory was encapsulated by the extraordinary intelligence of the smaller team that destroyed its giant opponent with speed, strength and surgical precision.

As in any sporting battle, there are pros and cons to the end result but the impression is that Napoli have been able to exploit all the weaknesses of their opponents so far this season by reducing the technical gap thanks to an aggressiveness that has so far only been admired in Serie A.

Victory over Liverpool was the most beautiful and important in the history of Napoli at the 'Diego Armando Maradona Stadium' and reaffirmed the curse that sees Klopp always in the greatest of difficulty when he has to face the Neapolitan club. 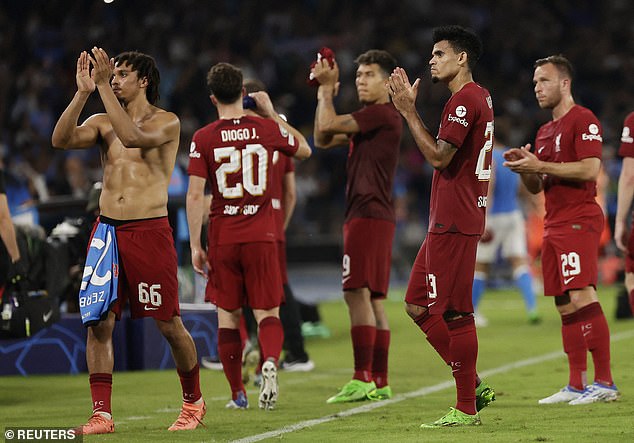 Former England manager Fabio Capello, watching this one in the Sky Sport Italia studios, held nothing back when savaging Liverpool's abject display.

'This does not seem to be the team that, a few months ago, dominated from a physical point of view,' he said.

It is no exaggeration to say that Capello is right, and Klopp will know it, too.

Liverpool lost the match in midfield with Harvey Elliott, James Milner and Fabinho wiped out by the physical and technical strength of Napoli.

Liverpool were like a boxer desperately clinging to the ropes of the ring, while the crowd urges the opponent not to show any mercy.

Napoli, meanwhile, were like a pinball machine, furiously moving the ball around at great speeds. Liverpool looked overwhelmed.

The atmosphere was like something befitting of Boca Juniors and, to the delight of the home fans, Napoli kept their foot on the accelerator in search of goals. 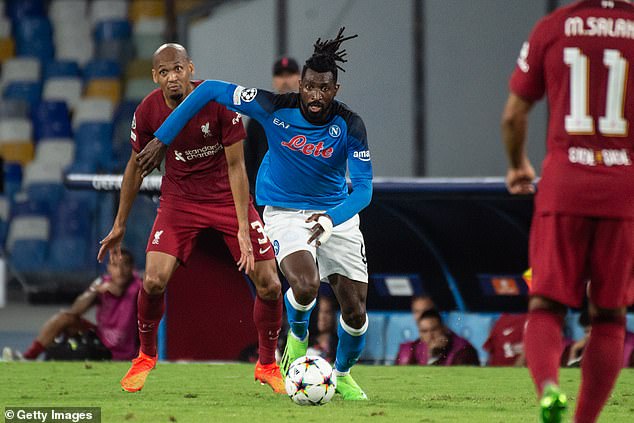 Spalletti has created a group that does not seem to have obvious weak points and few saw titles in the distance when David Ospina, Kalidou Koulibaly, Dries Mertens, Lorenzo Insigne and Fabian Ruiz moved on. Fans were irritated and even heckled Spalletti to 'wake up' during pre-season.

André-Frank Zambo Anguissa in the middle of pitch looks like an absolute beast and Liverpool's hapless players merely bounced off him. The former Fulham is proving to be an unstoppable force - but he also has and the tactical intelligence to complement his physical dominance.

Unquestionably Napoli's man of the match was Piotr Zielinski, who put them ahead by scoring in the fifth minute and capped off the night with goal No 4.

A fast start is nothing new for Zielinski. His opening strike against Liverpool means he has now scored two of Napoli's three fastest ever goals in the Champions League: against Liverpool and on December 6, 2017, against Feyenoord. That one was inside two minutes. 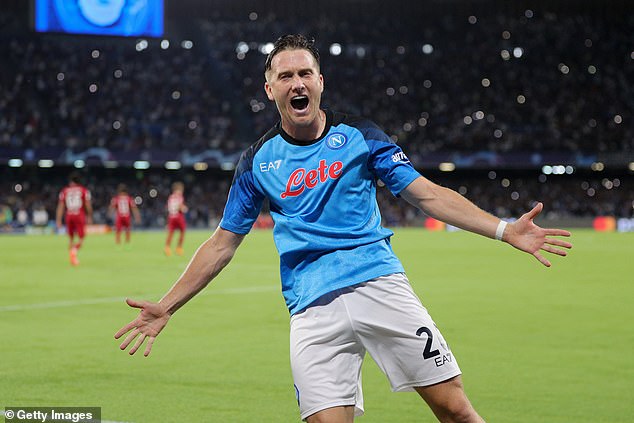 Things could have turned out so differently for Zielinski this summer and credit to Spalletti for coaxing the best out of him after a move to West Ham fell through late on.

His performances are so consistent and so great that many in the stands are ready to accept him as the heir to the great Marek Hamsik.

Napoli are scary; consider this an early warning to the rest of Group A and beyond.

They may be capable of coughing up a 0-0 against Lecce in Serie A one minute and putting Liverpool in the blender the next. Make no mistake, though, Spalletti is building a force to be reckoned with.

In the end this was as humiliating for Jurgen Klopp as it was his players.

Outclassed on the night. Swallowed by the occasion.

In Italy many wondered why Darwin Nunez, Thiago Alcantara and Diogo Jota were not deployed from the first minute. There was a feeling that Klopp was treating easy what could be - and turned out to be - a tremendously difficult match.

What followed was one of Liverpool's worst ever nights in Europe.

Without Alisson in goal, Liverpool would have suffered more damage. 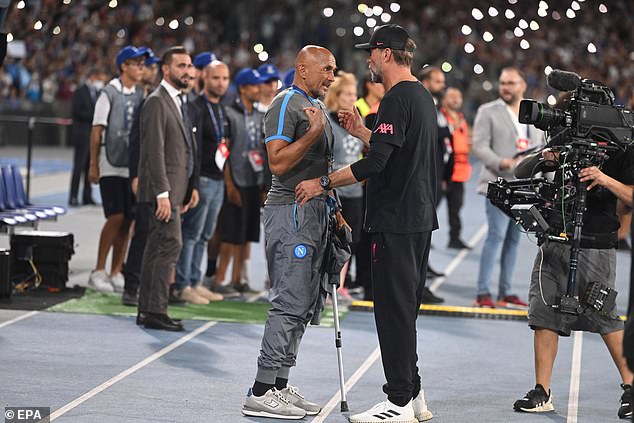 Liverpool showed a great deal of confusion and disorganisation, something that reared its ugly head in their loss to Manchester United, and that led to the award of two penalties.

The final result was never in the balance; Luciano Spalletti had pulled off the perfect game-plan, mastering Klopp in every tactical department.

Liverpool, and Klopp, completely underestimated the physicality of the midfield battle and that was what took the game away from them.

Anguissa, Stanislav Lobotka and Khvicha Kvaratskhelia dominated every inch of the pitch both tactically and physically. It appeared to catch Klopp and his players totally off-guard.

Klopp knows he is already, at the start of September, in a season-defining moment, and he no doubt has plenty of belief that this negative moment can end quickly. The harmony which he has established in a stunning few years in charge cannot be allowed to implode. 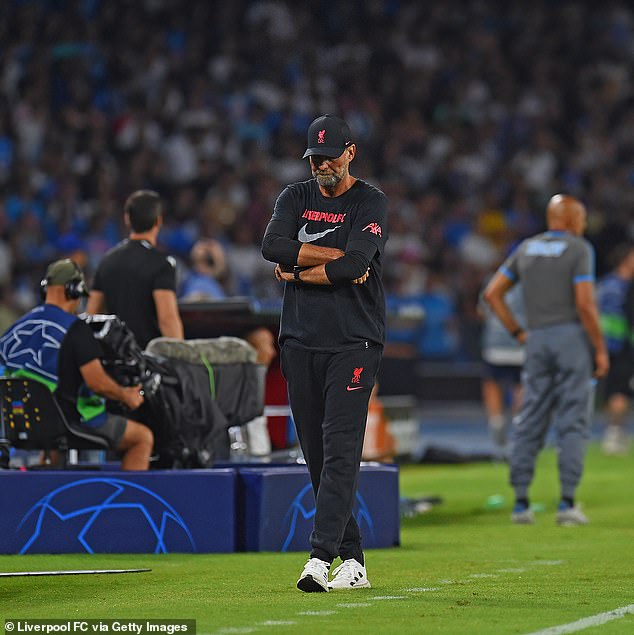 Meanwhile, this was one of Spalletti's greatest coaching performances. It was a masterclass. In Italy the word 'Cazzimma' springs to mind. It's a difficult word to translate but it encapsulates genius, intelligence and a cunning nature: three characteristics that sum-up Napoli this season.

Consider this a clear message of strength sent out to all opponents, domestically and in Europe.

Spalletti gave a real footballing lesson to Klopp, who committed the biggest possible mistake: underestimating Napoli and Italian football. In the end, he paid the heaviest of prices.

Liverpool were unlucky with Van Dijk's poor performance - rarely does he show up as the Achilles heel.

After a streak of 150 consecutive penalty-free games in all competitions for Liverpool, Van Dijk has now given two away in his last seven matches.

This was, undoubtedly, the worst match Joe Gomez and Van Dijk have played as a centre back partnership. 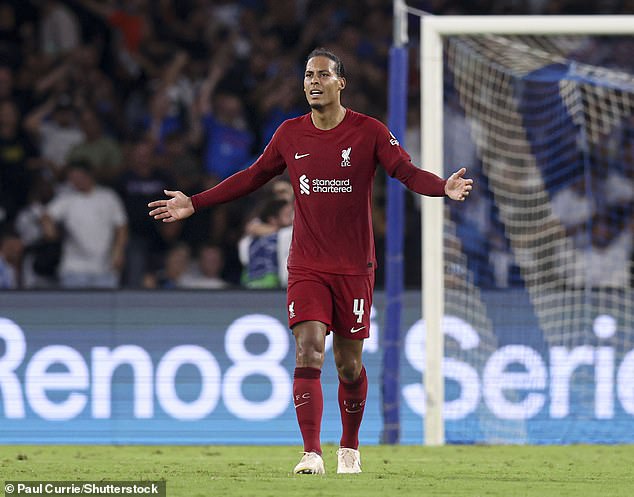 Virgil van Dijk had a poor night, made poorer by the display of centre back partner Joe Gomez

It was devoid of any understanding and showed a real lack of quality, particularly on the part of Gomez, who was hooked at half-time in place of Joel Matip.

Klopp spoke about his side needing to reinvent itself and there is no position that is more relevant to right now than at the back.

Van Dijk is world class and will bounce back but he knows it is vital to find a semblance of defensive solidity if this team is to make any noise this season.

Giovanni Simeone tapped in for 3-0 and immediately his fairytale story came flooding back.

'Cholito', the son of Atletico Madrid boss Diego, got the Champions League logo tattooed on his left wrist, remarkably at the age of 13.

His parents were furious then but it was all part of his plan that one day he would score in the competition and would kiss the tattoo in celebration.

With his first touch after coming on against Liverpool, he did just that. 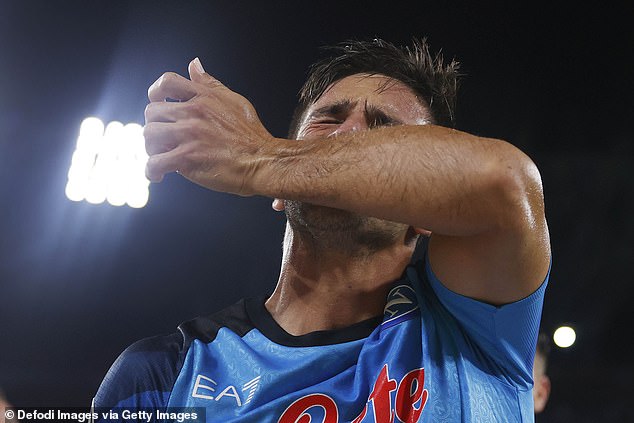 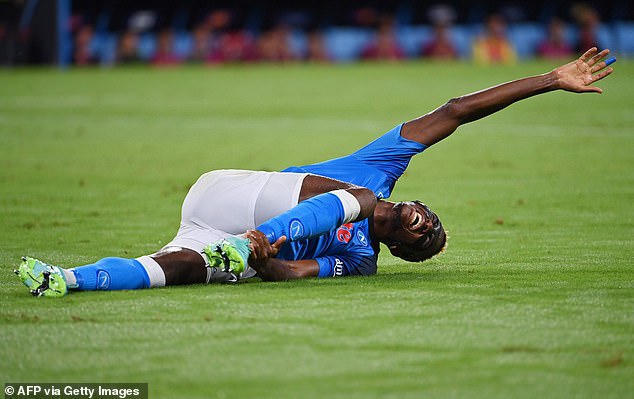 Simeone, now 27, kept his promise and was on the verge of tears as he celebrated putting Napoli 3-0 up having just come on off the bench.

Spalletti chose to gamble on playing Victor Osimhen, despite his difficulties with injury in the build-up, and while the Nigerian was not poor, it was something off an off night with a missed penalty and clear discomfort as he moved around the pitch.

Given Simeone's immediate impact, Spalletti may well have come to regret not having immediately started him.

Osimhen is a brilliant player but so is Simeone. It's been a patient wait but with the tattoo kissed and his form ascending, the Argentine proved he is more than capable of filling any void left by his Nigerian team-mate.