DOMINIC KING: Jurgen Klopp faces a battle he thought he'd overcome to try get the Liverpool faithful back onside... the players insist there is no hangover from the pain of May but words appear hollow while the team continues to falter  Liverpool defender Virgil van Dijk insists there is 'no hangover' at Anfield from last season, admitting his side are 'are not in the best moment' but is confident they can find their form claiming consistency is key Klopp: Even Ronaldo and Messi lose confidence sometimes! Gary O'Neil wins support of the Bournemouth squad for the permanent job... with Dominic Solanke and Jordan Zemura among those backing him to become boss after draw with Brentford  Klopp reveals 'long talk' with Nunez over Liverpool form

Napoli boss Luciano Spalletti FRACTURES his shoulder following 'accident' ahead of Champions League game with Liverpool... as he warns the Reds that the 'scream' of the Italian club's fans will 'reach Anfield'

Napoli manager Luciano Spalletti has fractured his shoulder ahead of his team's opening Champions League fixture against Liverpool.

But there was a new addition to Spalletti's managerial attire as he attended his pre-match press conference on Tuesday, as he cradled his right arm in a sling. 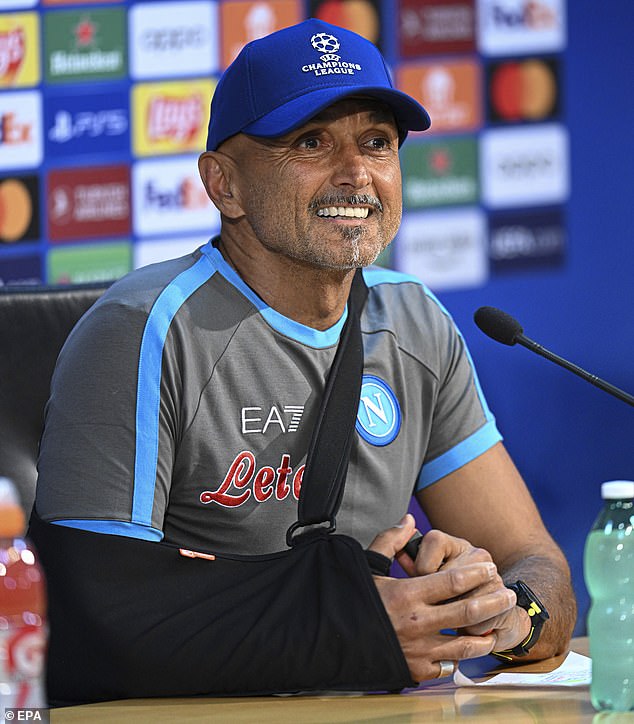 'I was involved in an accident on Sunday,' the Italian, 63, told reporters. 'I was here to oversee a training session for Salvatore Sirigu and Diego Demme. I'm always here when players are training.

'Unfortunately, I fractured a bone in my shoulder and experienced a lot of pain. I went for some check ups at the clinic in Milan, I had an x-ray, and that confirmed that I had a fracture.

'I managed to return to Naples tonight with a friend. I missed yesterday's training session but now it's all good, I have my captain here to support me,' he said smiling to Napoli skipper Giovanni Di Lorenzo who was sat next to him.

'You'll be seeing me with this sling for a while now, for at least a month.' 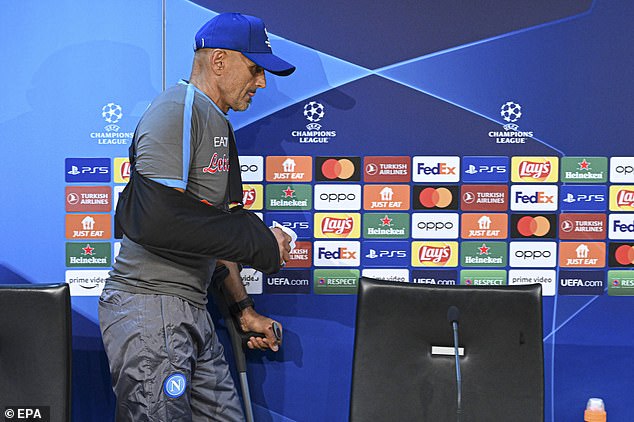 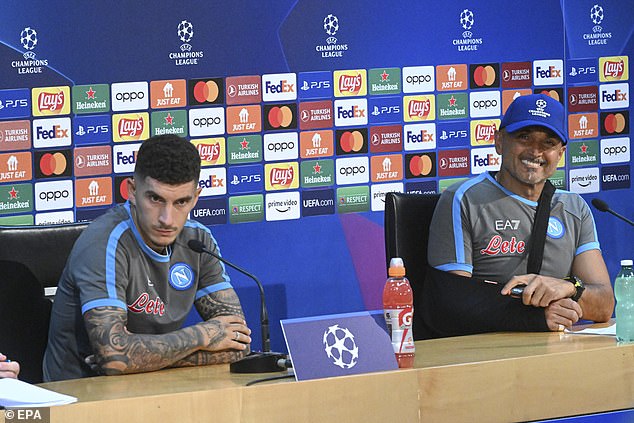 Spalletti, formerly of Roma and Inter Milan, also warned Liverpool that they will be walking into a cauldron of noise on Wednesday night.

'We know the strength that Maradona can give us,' he said. 'I am sure that tomorrow the Champions scream of our stadium will reach Anfield. The enthusiasm must prevail over the tension and our fans know how to give us a lot of life.'

Spalletti took over as Napoli boss in the summer of 2021 and led them to third in the Serie A table last season. 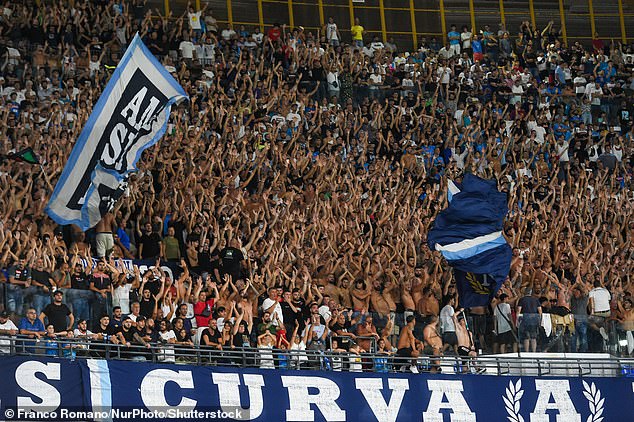 Now the test of the Champions League awaits - a competition in which the club have never made it past the round of 16.

'I am very excited to be able to lead Napoli in the Champions League,' Spalletti said. 'This is like a football funfair, the players are motivated, everyone's eyes sparkle and this is a prize to the great championship played last year.

'This is the competition that footballers dream of playing since they were children. But it is also a competition of the highest technical level where each ball can become the decisive ball that resolves the match.' 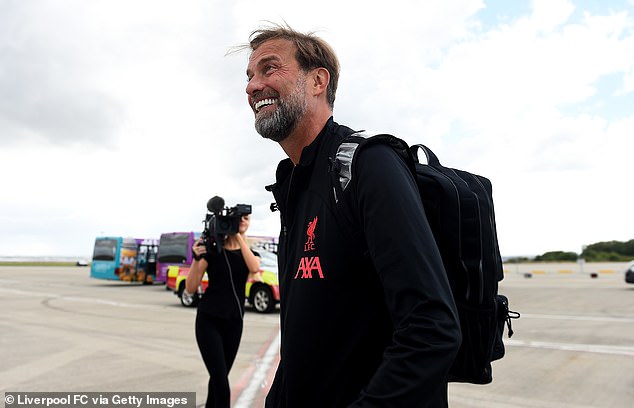 Spalletti is also looking forward to facing Liverpool boss Jurgen Klopp. The pair have only met on the touchline once before - when the German's Borussia Dortmund team won 4-2 against Spalletti's Zenit St Petersburg in the Champions League.

'I am honoured to sit next to Klopp's bench,' he said. 'He is a unique character and a coach who has a philosophy that distinguishes him worldwide.

'I will try to read the indications he will give to the team carefully. He is a coach from whom there is always something to learn.'