For Liverpool fans they were words to reassure, to convince and to rally behind. Jurgen Klopp at his defiant, most passionate best, you could say.

The trouble is, Reds supporters need more than their manager’s words right now.

They need their team to back them up with actions, and the evidence of this season suggests they might not be capable of doing so. Times are changing at Anfield, and maybe not for the better.

On Tuesday, Liverpool take on Napoli in their final Champions League group game. With both sides having qualified for the last 16, it could be viewed as a rare chance to relieve some tension for Klopp and his side, an opportunity to rest and rotate and try to enjoy, free from the all-encompassing pressure which seems to have accompanied pretty much every one of their fixtures for the past four years or more.

But even a dead rubber – Napoli isn’t that, anyway, given Liverpool still have a chance, albeit slim, to top the group – carries meaning at the moment.

The spotlight is shining bright, with questions growing as to whether this is a team in transition, or one heading into a permanent decline.

Not so long ago, Klopp would have railed at such a suggestion, but his answer when asked that precise question at his pre-match press conference on Monday was instructive, speaking, perhaps, to a sense of resignation that this, indeed, is the end of an era on Merseyside.

“It’s normal, it’s our life and it’s absolutely fair to ask these questions,” he said. “But I think the judgement for this should come later on in the season, or maybe at the end.”

His reasoning, it should be said, was sound enough.

He hadn’t yet, he pointed out, been able to field his strongest team, and with injuries having decimated his squad during the early months of the campaign – Liverpool have had 19 different first-team players injured so far – opportunities to rotate, to protect some players and get some rhythm into others, had been rare.

"If you say ‘that's it’ for this group of players, or for this manager, I don't think that's 100 per cent fair at this moment,” Klopp added. “You can’t judge this team, this squad, because we never had them available.”

But judgement, fair or otherwise, is simply the price on the ticket for a club such as Liverpool, who have worked hard to re-establish themselves as one of the world’s elite sides, and who have set such exacting standards in the process.

Success may buy credit, but losing successive league games to Nottingham Forest and Leeds is a sure-fire way to bring scrutiny, and Liverpool’s performances generally this season have been way below what Klopp, or his supporters, would expect or demand.

“We are all out there to be judged; manager and players,” Klopp said on Monday. “That’s how life is in professional football.

“But if you want to get out of something, first of all you have to go through it, and that is what we are doing.

"It’s a rough moment, no doubt about it, and nobody is here flying like everything is great, but there’s only one way to face it: go for it!”

‘Going for it’, of course, is easier said than done when your confidence – and the structure of your team – is as brittle as Liverpool’s appears to be right now.

Napoli, six points clear at the top of Serie A and with five wins from five in the Champions League, including a 4-1 slapping of the Reds in the reverse fixture in Italy, represent about as dangerous an opponent as they could wish for in that regard.

After all, if Brenden Aaronson and Rodrigo Moreno can cause mayhem at Anfield and leave with the points, then what might Victor Osimhen, Piotr Zielinski and the brilliant Kvicha Kvaratskhelia do?

On the other hand, Liverpool have often performed best under Klopp with their backs to the wall, when they are angry and hurting and seeking to prove a point, and it would be a surprise if we did not see a positive reaction on Tuesday night.

Klopp was unequivocal when asked what he wanted to see from his side above all else. “Fight!” was his answer, before he offered an insight into the kind of approach Liverpool will take against Luciano Spalletti’s side.

"We know the size of the pitch,” he said. “We have to win challenges, and the whole thing starts with winning the first challenge.

“Celebrate it in the stands and on the pitch, not by running around, just by feeling it. That's the first step in the right direction, and then go from there.

“I'm ready for that, and the people after the [Leeds] game gave me the sign that they are ready for it too.

"It was not the longest lap of appreciation we ever had, but when we hear the people singing you realise it is really special, so let's go from there.” 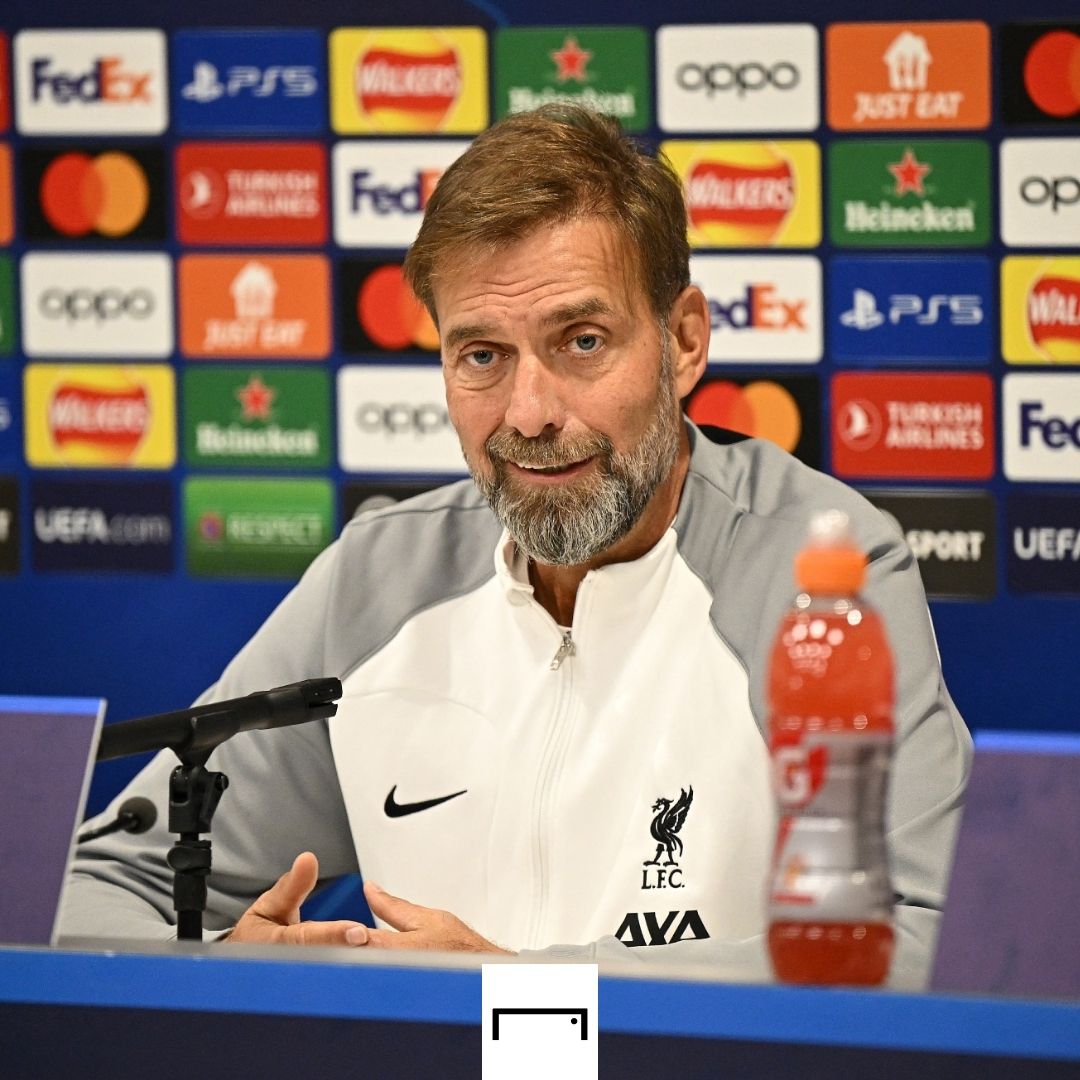 This was classic Klopp, striking exactly the right tone at exactly the right time, no hiding. He knows that he, as much as his players, is under pressure and that the world is rubber-necking in his direction, looking for cracks in the facade.

Here, he came out swinging.

“We will not stop fighting,” he said. “I didn't read anything but probably everything will be judged about me now, which is absolutely fine.

“People look at me and say ‘he looks tired’ or whatever. I'm not. I cannot give that excuse.

"My job is not only being here when the sun is shining and somebody gives us a trophy. My job is to be there when we have to go through a really rough period as well, and I will do that, with all I have, and even more if possible.”

Just what Liverpool fans wanted to hear, you’d have to say. They’re still in love with their manager, as the song goes, and we can expect the Kop, as they always do, to rally behind Klopp and his players in their hour of need.

The bigger question is whether this team can respond to that backing, rise above their struggles and provide some reassurance that better days lie ahead.

It could be now or never, in that regard.

'They are in major trouble': Paul Merson says Liverpool's failure to follow up their win over Man City with results against Nottingham Forest and Leeds is 'inexcusable'... as Arsenal legend says teams are no longer 'scared' of them