GRAEME SOUNESS: Every World Cup team would have loved a player like my old mate 'Doc'... the late David Johnson was a special individual and leaves indelible memories for those of us who played with him 'It's easy to speak from the studio': Virgil van Dijk fires back at Marco van Basten in war of words with the Dutch legend after he blasted the defender's display in the draw with Ecuador, saying 'he takes care of NOTHING in the team' GOAL50 2022: Mohamed Salah vs Sadio Mane

It is said VAR is a joy-killer but you would have had to search far and wide at Anfield to find anyone to agree with that view.

As the happy masses departed, looking forward to 2023 and the prospect, potentially, of a glamour last 16 showdown with Real Madrid, Bayern Munich or Paris St Germain, nobody from within Liverpool's camp had reason to quibble with computer graphics or fastidious delays.

How could they? VAR's intervention, for Liverpool, was transformative. It enabled them to clamber off the floor in the 52nd minute and left fans bouncing in the aisles way past 10pm, as Jurgen Klopp's team became the first to inflict defeat this season on Napoli.

Even the most mundane evenings at Anfield can unexpectedly turn dramatic and there was history here, too, as Mohamed Salah joined Steven Gerrard as Liverpool's leading scorer in Europe, his 41st goal in the 85th minute breaking the deadlock and giving his side the win they feel they deserved. 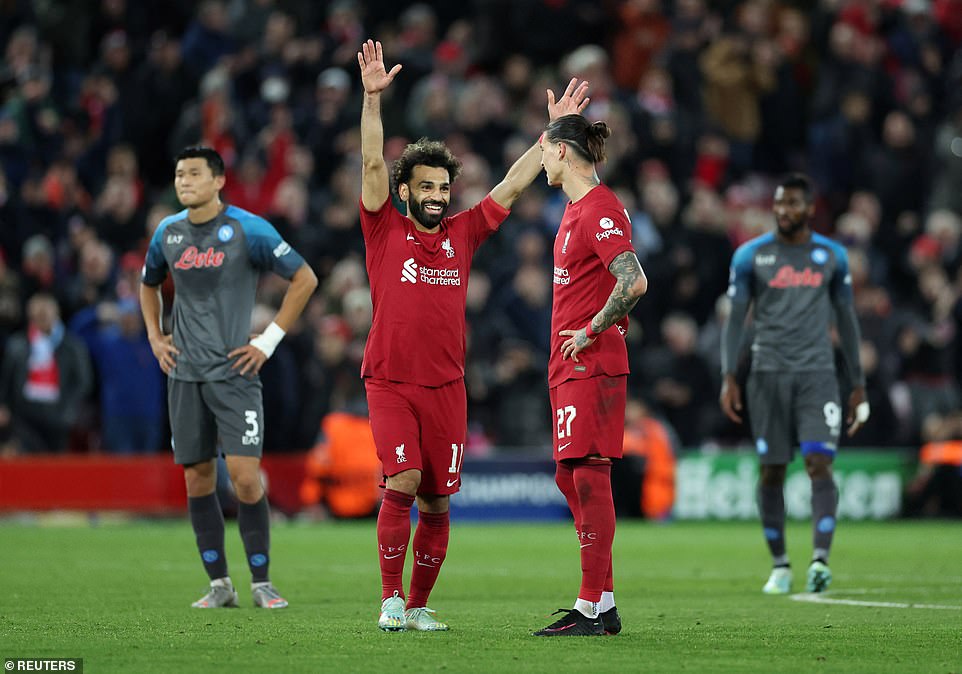 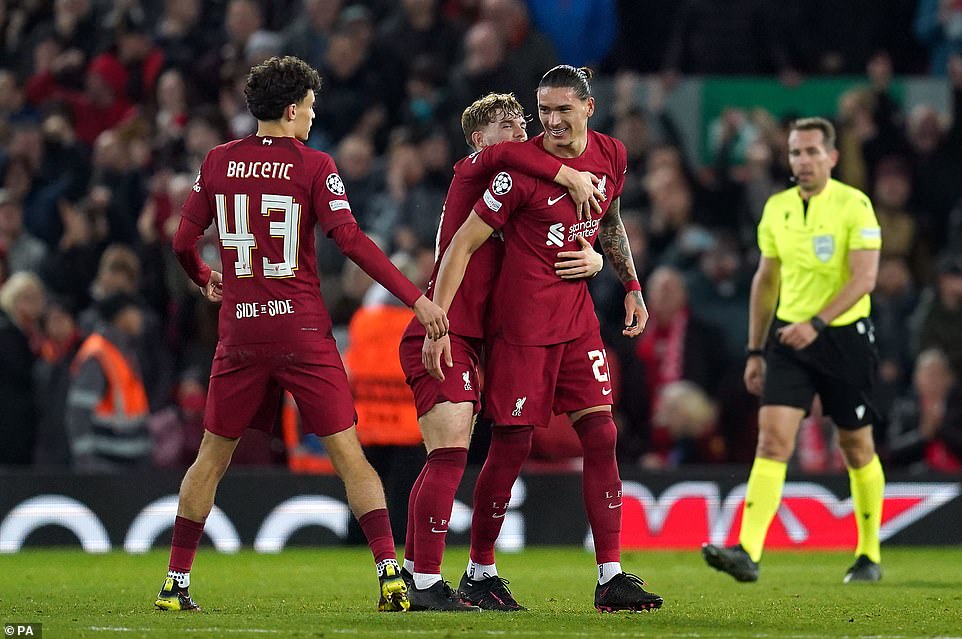 Liverpool forward Darwin Nunez (right), 23, added to their tally in the eight minute of stoppage time to secure the win

What cannot be overlooked, though, is just how decisive VAR was in shaping this story, from the delay that was required to ascertain whether Leo Ostigard was offside when it seemed he had drew first blood to the painstaking scrutiny that was needed to confirm Darwin Nunez's late toe poke.

Napoli, really, ought to have left Anfield with a win. When Khvicha Kvaratskheila whipped a free-kick into the penalty area, Ostigard span away from Virgil van Dijk and planted a header past Alisson Becker. It didn't look offside, no Liverpool defender appealed, nobody complained. 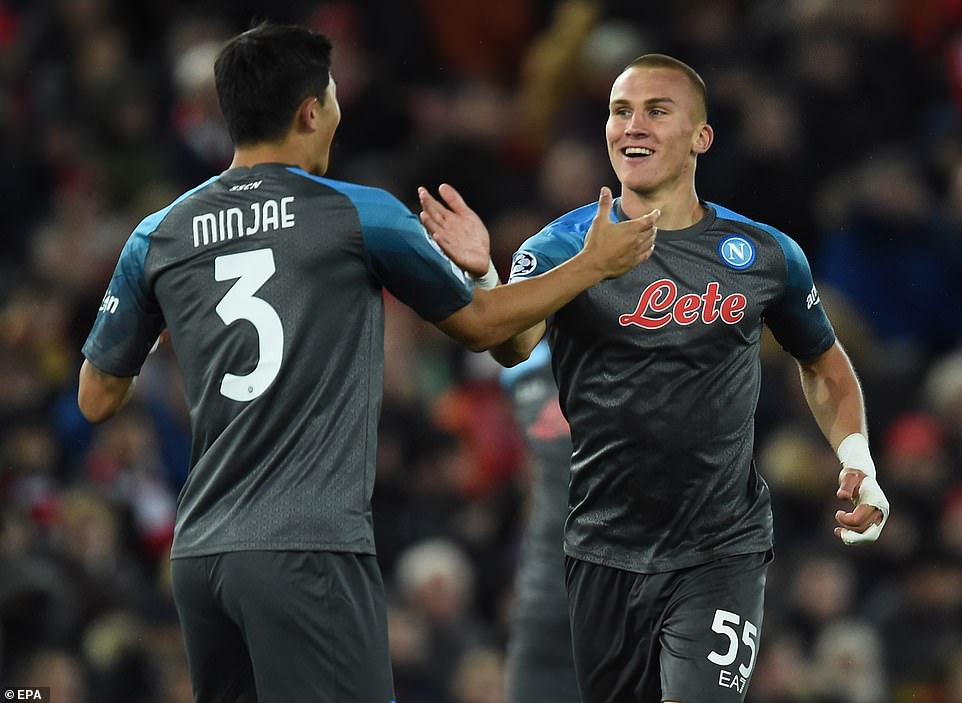 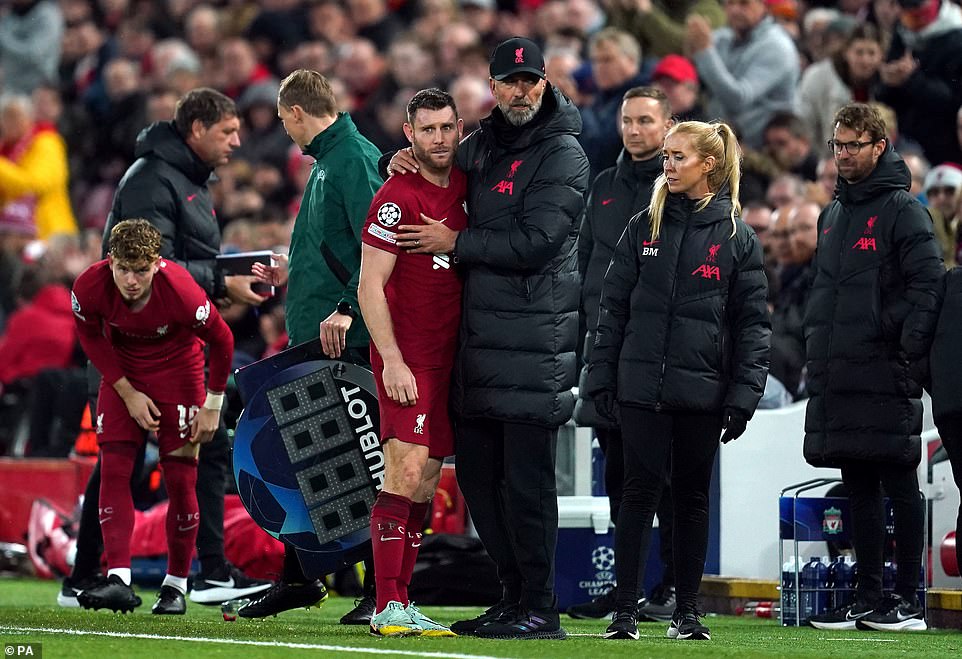 The game marked Jurgen Klopp's 400th game in charge, making him only the fourth Reds boss to reach the milestone 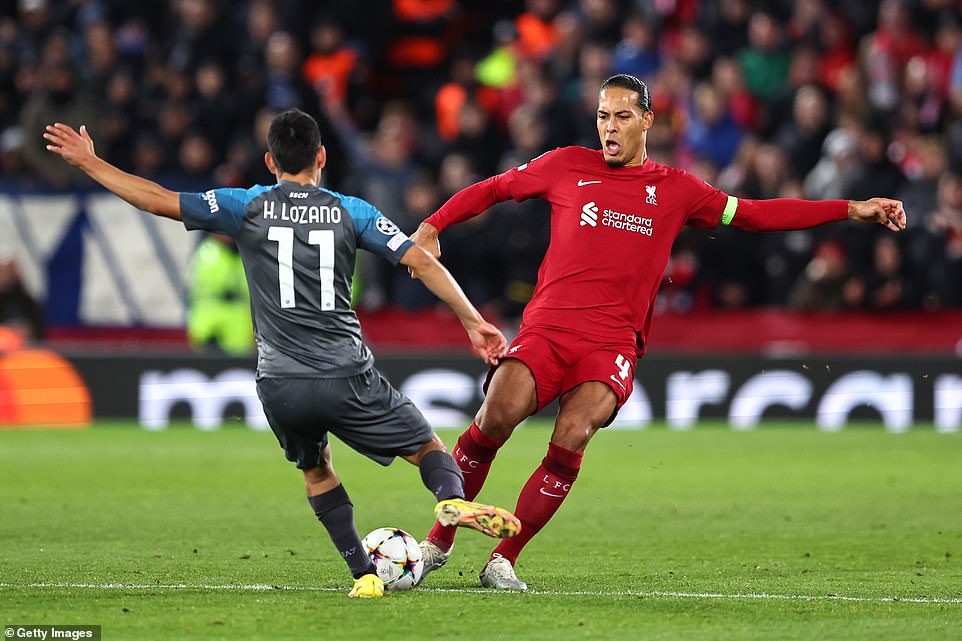 At first and second glance on replays, it was difficult to see any infringement but, this being modern football, we had to wait. And wait. Then wait some more. Not as long as everyone had to suffer at Tottenham last week but, still, it dragged on to the point that players were worried about seizing up.

It had reached more than three minutes 40 seconds before referee Tobias Steiler was able to signal that a free-kick needed to be taken and even the most ardent fan would admit that is far too long to determine whether a decision is correct.

When a computer generated graphic needs to be produced to show that a player's shoulder and ear are fractionally the wrong side of a line, you know instinctively this is not what football is about. The system, of course, is here to stay but don't kid yourself that makes for a better spectacle.

'It was alright for us,' Klopp conceded. 'When you wait long but it goes in our direction three times, it is fine. I didn't see the first goal, but I guess after that long they made the right call and for us the same.'

But surely any decision that needs to be looked at for more than two minutes, from different angles and at different speeds, should be left at the original call? Liverpool, undoubtedly, were thankful to be saved but that misses the point. On another day, they will be the ones cursing fine margins.

All that late drama was at odds with how it all started. It took 29 minutes for Liverpool to have their first shot at goal but Thiago Alcantara's effort, swept away after a slick lay off from Salah, was a good height for Napoli goalkeeper Alex Meret to beat away.

Thiago was involved again 60 seconds later, flipping a beautiful pass out to Trent Alexander-Arnold to set the wheels in motion on an attack that ended with Roberto Firmino acrobatically back heeling a volleyed pass – yes, you read that correctly – onto the head of Curtis Jones.

Again, the final effort lacked the direction to trouble Meret but here, at least, was a tempo to which Klopp and Liverpool's supporters could relate. The question was if it could be sustained until the end.

Whether they would have had the appetite to pursue a goal of their own had Ostigard's header stood is open to debate but they did and Salah, inevitably, had the ultimate say, bundling in from close range after Darwin Nunez's header was scrambled away.

'Is it mine?' Salah asked. 'Okay great! Thank you. Honestly, I didn't know because the ball is in, but they didn't say for which player but thanks for confirming that, anyone can score, but the most important thing is the team.' 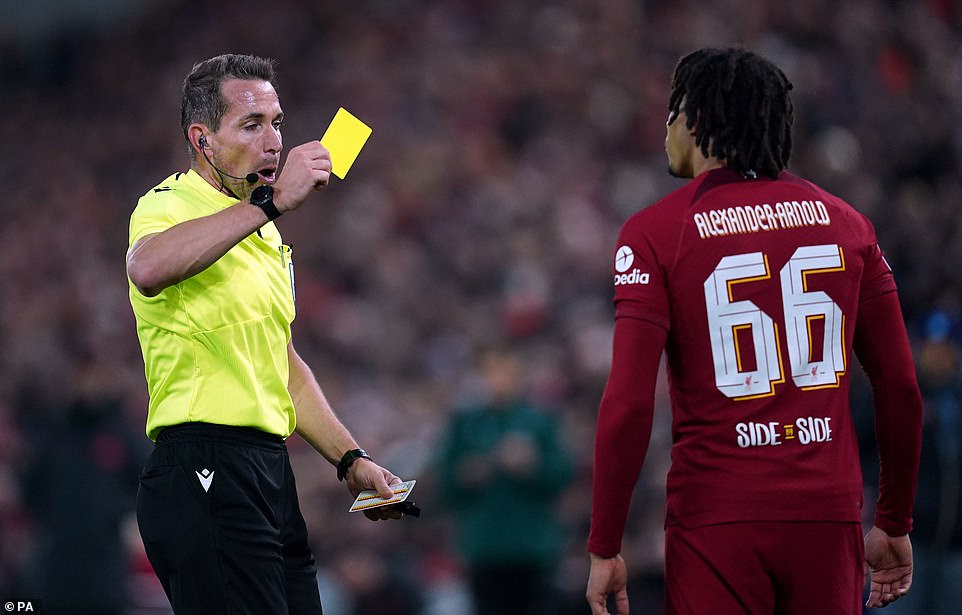 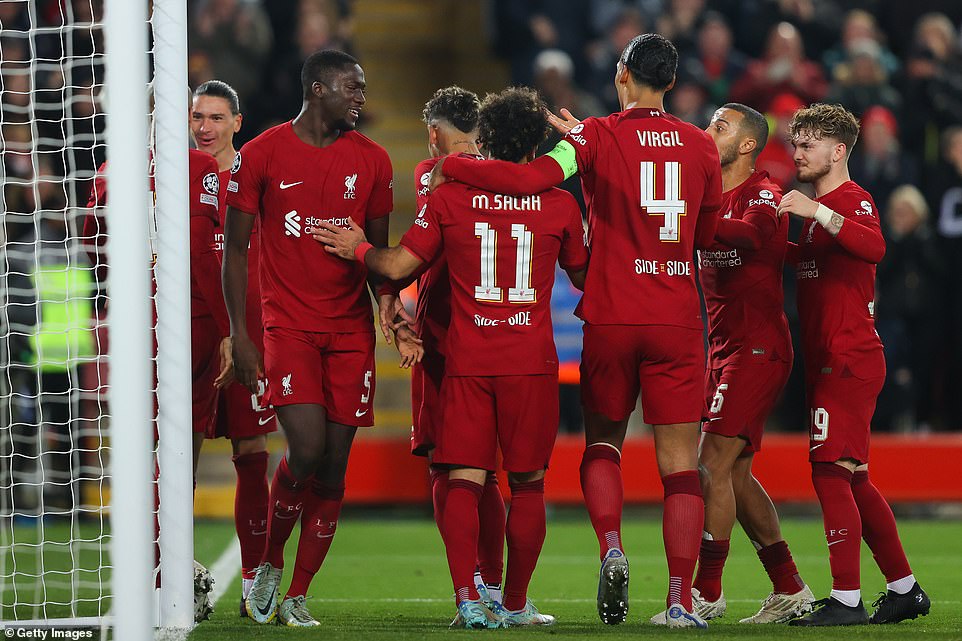 Appropriately, though, there was time for VAR to make a mark once again. In the seventh minute of injury time, Nunez stabbed in from almost on the goal-line but was ruled offside. Or was he? A two-minute check later and it was awarded. Perhaps Liverpool's fortunes are finally turning.

'That was the reaction I wanted to see,' said Klopp. 'We did really well. We kept the spaces small, all of a sudden we have challenges, a lot of counter pressing moments, good football moments; we showed the right determination.'

It was difficult to argue with that assessment and it was noticeable to see a change in Klopp's demeanour. The domestic campaign might be floundering but, true to form, they are progressing smoothly in the competition they cherish most of all. Lucky seven in Istanbul? Stranger things, most definitely, have happened.

Relive the action with Sportsmail's live blog of Liverpool's Champions League games with Napoli below.

GRAEME SOUNESS: Every World Cup team would have loved a player like my old mate 'Doc'... the late David Johnson was a special individual and leaves indelible memories for those of us who played with him

A midfield trio of Jude Bellingham, Kevin De Bruyne and Rodri would be unstoppable behind Erling Haaland... how Man City could line up if they snare Borussia Dortmund star ahead of rivals

'They are in major trouble': Paul Merson says Liverpool's failure to follow up their win over Man City with results against Nottingham Forest and Leeds is 'inexcusable'... as Arsenal legend says teams are no longer 'scared' of them