Man United boss Erik ten Hag 'is lining up a bid for PSV star Cody Gakpo in January' after impressing at the World Cup, as he looks to replace Cristiano Ronaldo... 'with AC Milan's Rafael Leao also on the shortlist' Maguire's mate is a long way from the World Cup... But De Girolamo is a star for Buxton and will be hoping for an FA Cup upset when his side face Ipswich Town in the second round MARK CLATTENBURG: The conversation over 60-minute matches is one football should be having - and one that FIFA have considered in the past - as we grow accustomed to seeing double digits added on in Qatar 'You're talking about one of the best players in history': Casemiro insists Cristiano Ronaldo's bitter Man United exit is a 'sad' moment for the club... but the Brazil star is yet to speak with former team-mate following his tell-all Piers Morgan interview OLIVER HOLT: His ego can't take it but the inconvenient truth for Cristiano Ronaldo is that Manchester United aren't the only team better off without him - Portugal are too!

'On the tour he didn't display the attitude he should have': Alejandro Garnacho had to work his way back into favour at Man United at the start of the season, reveals Bruno Fernandes, with Paul Scholes suggesting he got 'too big for his boots'

Bruno Fernandes revealed that Alejandro Garnacho's early season struggles were in part due to his poor attitude on Manchester United's pre-season tour.

The Argentine backed up his strong showing against Sheriff Tiraspol last week with another impressive performance, marking it with his first goal for the club.

Despite his strong showing, and United extending their unbeaten run in all competitions to nine games, Erik ten Hag's side could not grab the second goal they needed to avoid the competition's play-off round with those who have dropped down from the Champions League. 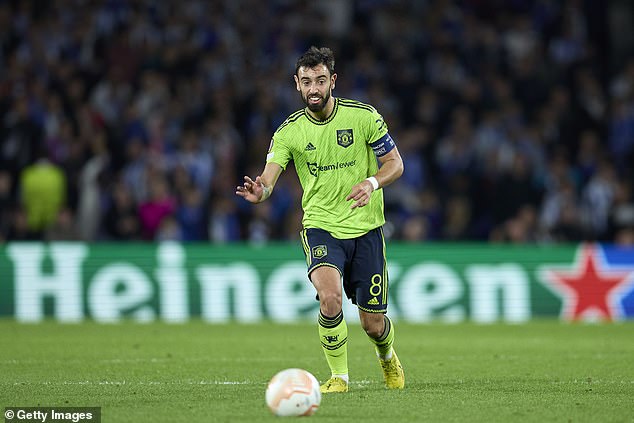 Speaking after the game, Fernandes expressed disappointment at not having carried out their objectives but praised Garnacho who he said was finally applying himself in the correct manner.

'He was good, he knows we expect a lot from him,' Fernandes said. 'He is still really young, he's doing really well.'

'He wasn't at his best at the beginning of the season, on the [pre-season] tour he didn't display the attitude he should have, but now he's training better and getting his chances. He's deserving of those chances.' 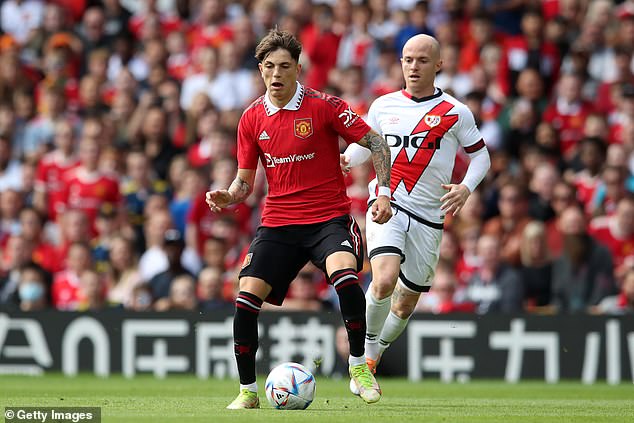 Paul Scholes, on punditry duty for BT Sport, speculated after the game that those attitude problems could have stemmed from the young Argentine getting 'too big for his boots' after being called up to the national squad.

'He said that was pre-season, didn't he, so he was obviously a little bit big for his boots in the summer. I think he went away with Argentina, maybe playing with [Lionel] Messi, he came back and thought this is me, I'm part of this team.

'He's a young lad, he's going to learn. His attitude has changed and we're seeing the benefits of that, now he looks a really top class young player.' 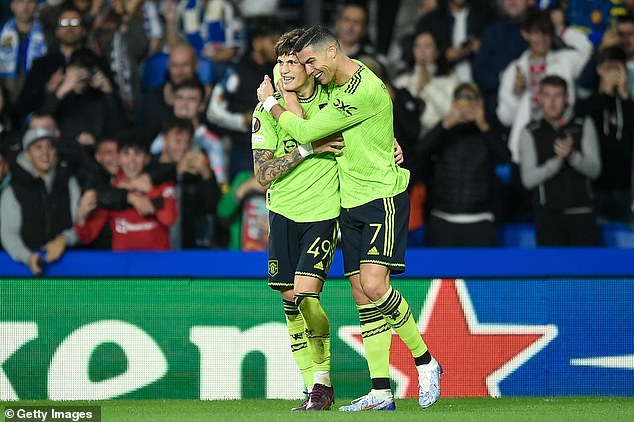 Meanwhile, Fernandes said that there were a few positives to take from San Sebastian but that they were disappointed not to finish ahead of Real Sociedad.,

'Obviously our goal today was to win by two goals, we knew that we needed that. We played a great game, we tried everything.

'At the end we took a few more risks, to score the second goal but we won the game. It's a great win against a tough opponent - as I said, it's not brought us to the top of the group, which was our goal before the game, but it's always a win.'

Fernandes was deployed on the right-hand side by manager Erik ten Hag in a tactical move questioned by Scholes and was reticent to admit that it is a position within which he is comfortable.

'I play wherever the coach needs me to play. I try the best to help the team, it's not my position,' he said.

'I don't think any Manchester United fan could of ever predicted that': Fans are left baffled after Erik ten Hag brings on Harry Maguire as a STRIKER as they chased second goal in latter stages against Real Sociedad

'You don't always get what you deserve': Erik ten Hag is left with mixed feelings after 1-0 win at Real Sociedad that saw his Man United side narrowly miss out on prized top spot in their Europa League group