What EVERY Premier League club wants with five days to go in January window: Free-spending Chelsea have FOUR names on their wish-list, Aston Villa have cash to splash, Man United STILL want a low-cost forward and all 20 teams could be busy Why iceman Marcus Rashford is back to his red-hot best: Manchester United star is feeling the benefit of sessions in a -140˚C cryosauna worth £50,000 and previously used by Cristiano Ronaldo at the best gym in the UK  DOMINIC KING: Having insisted he 'lives and breathes' Everton, it is bewildering that Anthony Gordon now seems not to give ANY thought to how he will be perceived by fans as he tries to force through Newcastle move

Police in Uganda have detained at least 20 supporters for taking part in a trophy parade on the street following Sunday's massive victory over Manchester United.

The Gunners beat United 3-2 with a 90th minute winner from Eddie Nketiah to reinforce their title credentials.

The win leaves Mikel Arteta's side five points clear with a game in hand, exactly half way into the season. 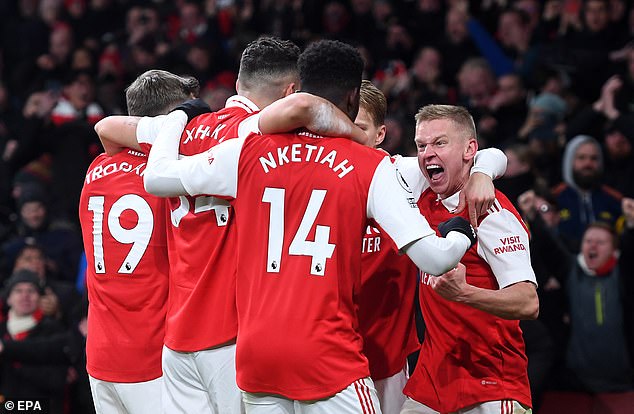 A day later, police intercepted a group of jubilant Arsenal fans who were driving in a convoy of about five vehicles through Jinja.

While Police have not commented on the arrest, a member of the group has done so.

Baker Kasule told Daily Monitor that a police patrol vehicle pulled in front of them and asked each one of them to disembark and climb the patrol car which was destined for Jinja Police Station.

'I don't know what we have done but we were simply celebrating our victory over rivals Manchester United,' Mr Kasule said.

He then added that 'they are 20 supporters in total, all from Jinja City.'

'Get me Chelsea or Bayern - or we BREAK UP': Cristiano Ronaldo's 'final ultimatum' to his agent Jorge Mendes is revealed in a Spanish report that sheds new light on desperate bid to escape Man United