WHAT'S HAPPENING? The Gunners have already had one offer for Mudryk rejected by Shakhtar Donetsk, which was understood to have totalled around £55 million, including add-ons.

But GOAL can confirm that the Premier League leaders have now raised their bid for the 21-year-old winger, who is desperate to make a move to north London this month and even used his Instagram page to publicly praise Mikel Arteta on Saturday.

THE BIGGER PICTURE: Shakhtar have yet to respond to the offer and the club's hierarchy will now meet to decide whether it is acceptable. Key figures at the Ukrainian club have publicly valued their prized asset at around £90m and this second offer is believed to be well below that figure once again. Arsenal are hopeful a compromise can be reached, however, with both clubs having been locked in talks for weeks over the potential structure of any deal, should one be reached. 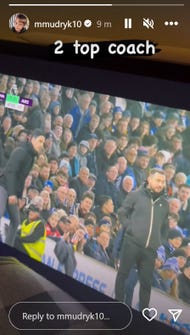 THE VERDICT: Arsenal will be hoping Shakhtar deem this latest offer acceptable, as they are keen to get a deal for Mudryk over the line as swiftly as possible - with Chelsea believed to be monitoring developments closely. Arteta wants to add more firepower to his title-chasing squad and Mudryk has long been identified as the priority for this January window.

WHAT NEXT FOR ARSENAL? The Gunners host Newcastle United in the Premier League on Tuesday night knowing that victory will see them move 10 points clear at the top of the table.