Brazil star Neymar appears to copy an outrageous Lionel Messi piece of skill by using the REFEREE to beat defenders in their World Cup thrashing of South Korea - in an echo of his PSG team-mate's brilliant improvisation while at Barcelona  Barça making renewed attempt to re-negotiate De Jong's contract Barcelona tracking Arsenal forward Gabriel Martinelli at World Cup Tottenham emerge as favourites to land Barcelona midfielder Kessie Cash-strapped Barcelona 'want to REDUCE Frenkie de Jong's salary as they look to free up funds for a new right-back in January'... after they warned Dutch star's agents of potential illegalities in his deal last summer in bid to force him out

'What a career. What a player': Gary Lineker leads social media tributes to Gerard Pique after legendary defender produced a vintage display in an emotional final appearance at the Camp Nou as Barcelona defeated Almeria

Gary Lineker heaped praise on Gerard Pique as the legendary defender received an outpouring of tributes on social media after making his final appearance at the Camp Nou on Saturday.

With more than a year remaining on his contract at the Catalan club, Pique shocked the football world earlier this week when he announced that was going to call time on his career in the sport.

As a result, Saturday's game between Barcelona and Almeria marked the final time that the 35-year-old would get the opportunity to walk out in front of the adoring fans of the club that he has supported since birth. 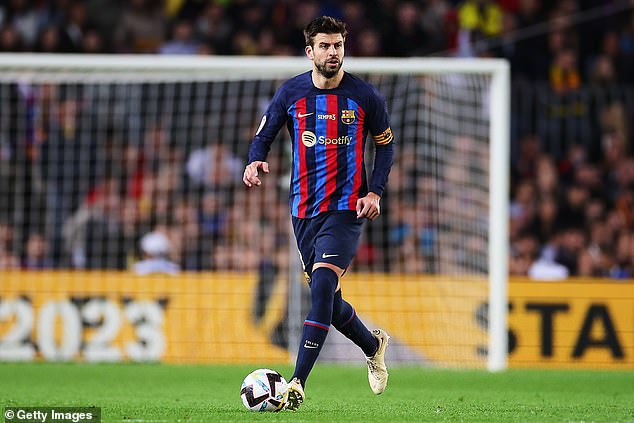 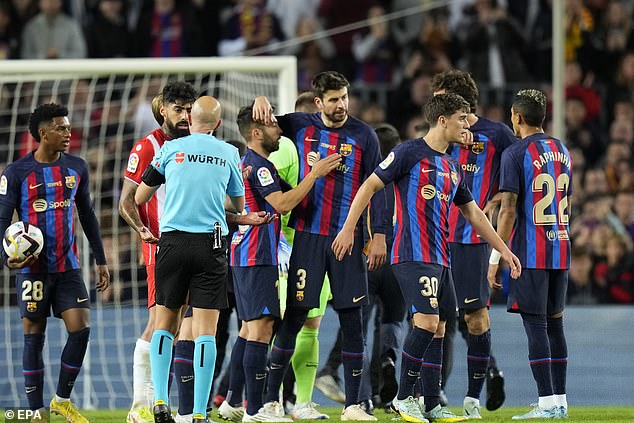 With the home side enjoying a comfortable 2-0 lead, former teammate Xavi substituted Pique to allow him to receive the kind of ovation that his time at the club warranted, in front of 92,605 supporters.

Following the game, former Barcelona striker Lineker paid tribute to the Catalan star's career: 'A winning finale for the great @3gerardpique. Hard to imagine a team without him. What a career. What a player.'

@PPMBARCA also highlighted the difficulty in envisaging a future Barcelona team without Pique: 'Looking at the Barça team sheet and not seeing Pique's name is gonna be a bitter pill swallow. For as long as I've been a Barça fan Pique's been a fixture in this team. He's won everything at this club and been there in our lows. I wish him the best in his retirement. Legend'

Another social media user highlighted Pique's renowned skill on the ball: 'Gerard Piqué was so good on the ball they nicknamed him ‘Piquenbauer’. Arguably the best ball-playing defender of my generation. He even gave a demonstration of how good he still is on the ball in his very last match tonight — lovely ending to an unforgettable fairytale.'

@NealGardner wrote: 'Gerard Pique would still be a starter for the vast majority of European sides, but he’s always said that he’ll retire here - and he’s stuck by his word. A Barça fan - though and through, and I’m so grateful that he represented my club. Farewell, legend.'

A further fan added: 'Man Pique is a LEGEND!!! He was around for all those glory years'